The longstanding fiasco over H1B visa reform and green card logjam is, at times, penetrated by flickering glimmers of hope for an unclouded sky. A new bill has recently been introduced in the US Congress, seeking flexibility for H1B visa holders to switch to new jobs in the United States so that they can continue to fuel the American economy with their contributions. Known as the Immigration Innovation Act of 2018, the bill does also seek to assert H4 visa holders’ right to work and propose green card allocation to students on F1 visas.

Introduced by Illinois Democrat Raja Krishnamoorthi and Colorado Republican Rep. Mike Coffman, the bill is a remedial proposal to reform and streamline the H1B visa program for foreign nationals. The bill has been raised to the Judiciary, Education and Workforce committees. Improving the US economy through increasing investment in STEM education (science, technology, engineering and mathematics) for post-secondary or college students is what the bill is aimed at. 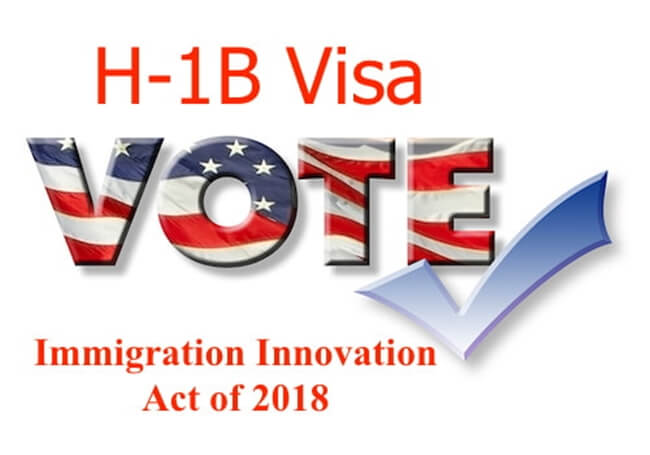 “Our immigration policies must sync with the economic needs of our country,” Mike Coffman said in a press release on the Immigration Innovation Act of 2018. Speaking in favor of the bill, he added that the US Congress’ responsibilities include a crucial role in ensuring that immigration laws and reforms must not be detrimental to the country’s foreign workforce which influences the economy to a fair extent. He opined further that the immigration laws and policies should not discourage H1B visa applicants. Rather, it should meet their needs.

It is proposed in Mike Coffman and Raja Krishnamoorthi’s Immigration Innovation Act of 2018 that the fees collected from green card and H1B visa applicants must go to the Department of Treasury, and that the fund should be utilized to support domestic STEM education, research initiatives and worker training. The bill gives a breakup of the proposed fund distribution. 93% of the money will be allocated to the states, half of which will be spent for education and the other half will be used for facilities for worker training. 2% of the remaining fund will be used to facilitate national R&D, and financial aid for students will come from the rest (5%).

Leading US policy analysts and experts have hailed the Immigration Innovation Act of 2018 as a deliberate step to reduce the country’s demand for foreign workforce and enhance the American economy at the same time since the bill seeks a bigger investment in advanced training for native workforce in the USA. “By seeking to increase the fund for our education system, we want to make sure that American workers are trained and skilled enough for high-tech jobs,” said Raja Krishnamoorthi.

Furthermore, the Coffman-Krishnamoorthi bill seeks to alleviate the existing green card backlog by expanding education-based exemptions from per-country caps on allocation of permanent legal residency to H1B visa holders. Evidently, the Immigration Innovation Act of 2018 is in favor of Indian nationals on H1B visa. If the bill is approved, it will also allow students holding F1 visa or undergoing Optional Practical Training to apply for permanent residency in the United States.

The Immigration Innovation Act of 2018 has hiccups on its way to become a law since the Trump administration may deny US citizenship or permanent residency to those receiving certain federal benefits including food stamps, public housing, childcare and the Affordable Care Act (Obamacare) as per the NBC News reports in August this year. The draft policy intends to promote self-sufficiency for immigrants and reduce their use of finite resources for the sake of American taxpayers, according to the Secretary of the Department of Homeland Security.

Immigration Innovation Act of 2018: Some of the key points

One thought on “Highlights of Newly Introduced Immigration Innovation Act of 2018 for H1B, H4 and F1 Visa Holders”