Ultimately, the abuse of H1B visa program seems to come to an end as US President Donald Trump signed the executive order, Buy American and Hire American, to eliminate US work visa frauds. H1B visa has been a popular instrument for some firms in USA to make money illegally. Even some Indian Americans were found exploiting this work visa program in 2016 for their own monetary benefit. In most cases of H1B visa fraud, America’s local workforce was replaced by low-skilled foreign workers for a considerably low wage.

The executive order, Buy American and Hire American, with Donald Trump’s signature and the White House stamp is a most-awaited, all-in-one solution to reform the immigration system based on American work visa programs. A pressing need of the hour, it is a directive for all federal agencies to draft new rules and guidelines in the interest of American workers. Prevention of H1B visa abuse is the most-expected outcome of Buy American and Hire American. 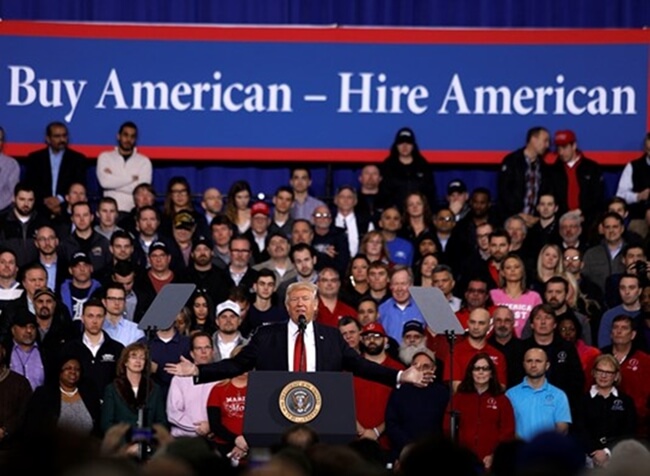 Donald Trump’s new executive order, Buy American and Hire American, is intended to create high-paying jobs for Americans and save the existing ones for them at the same time by restricting the inflow of foreign workers to USA and making the immigration process more rigorous than before, so that American workers having special skills get employed and high-skilled foreign workers benefit from H1B work visa program.

The latest executive order from the White House is aimed at strengthening the US economy and national security by promoting the manufacturing and defense industries to economically empower the middle-class income group in America. It also seeks to maximize the use of products made and goods produced in the US in order to boost the American economy.

The Buy American and Hire American policy is aligned with the promises that Donald Trump made during his electoral campaigns in 2016, including the ‘America First’ campaign focused on H1B visa fraud prevention, immigration system reformation, industrial development, national security enhancement, and economic growth.

Within 60 days from the date of issuing the executive order, Buy American and Hire American, the Secretary of Commerce and the Director of the Office of Management and Budget are required to issue guidelines to their respective agencies regarding how to make assessment policies, in discussion with the Secretary of State and the Secretary of Labor.

Within 150 days from the date of issuing the executive order, the heads of all federal agencies are required to monitor the implementation and enforcement of ‘Buy American’ laws, and assess its impact on domestic jobs as well as manufacturing. The Buy American and Hire American policy also requires them to submit assessment reports including key findings to the President.

This order is not intended to, and does not, create any right or benefit, substantive or procedural, enforceable at law or in equity by any party against the United States, its departments, agencies, or entities, its officers, employees, or agents, or any other person.

Click Here to check more details of the executive order on Buy American and Hire American.