Forbes’ 2022 List of 400 Richest Americans features only four Indian American billionaires: Jay Chaudhry, Vinod Khosla, Ramesh Wadhwani, and Rakesh Gangwal. Forbes featured as many as seven richest Indian Americans in 2020, out of which three have been dropped this year. The net worth of Jay Chaudhry, the richest of all Indian-origin billionaires in the US, rose to $12 billion in 2021 from US$ 3.4 billion in 2018. However, his net worth has plummeted to $8.3 billion due to the stock market slowdown. Rakesh Gangwal, an aviation heavyweight from Miami, is the fourth richest Indian American on the Forbes 2022 list; whereas he had ranked first of all Indian-origin American billionaires in 2018 and 2019.

The four richest Indian American billionaires on the 2022 Forbes 400 list have a collective wealth of US$ 22.9 billion. “After a roaring 2021, the 400 richest people in the U.S. have been hit by rising inflation and falling markets. As a group, this year’s Forbes 400 is $500 billion poorer than they were a year ago. Their total net worth stands at $4 trillion, down 11% from last year,” said Forbes’ Deputy Wealth Editor. 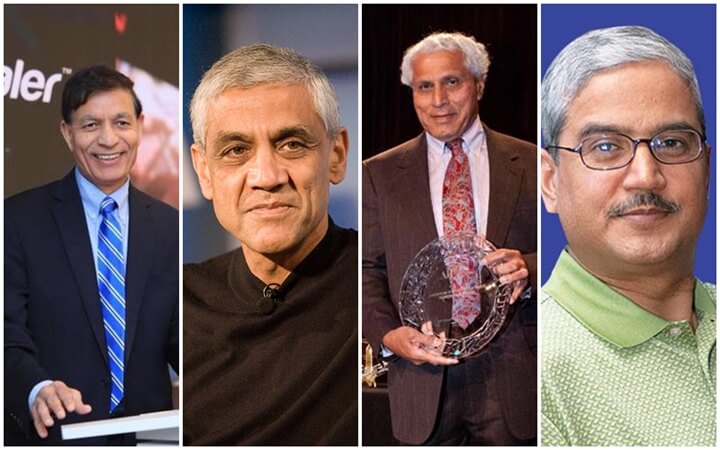 With a net worth of $8.3 billion, Jay Chaudhry, the CEO of Zscaler, is the richest Indian American billionaire or the wealthiest American of Indian origin in USA. His journey from a small Himalayan village to Wall Street is an inspiring story of American Dreams. Born in Panoh, a remote village without running water in Himachal Pradesh, Jay Chaudhry is a leading cyber security business tycoon in San Francisco Bay Area. He co-founded Zscaler, a virtual security checkpost for companies exposed to cyber threats, in San Jose after a short stint in sales and marketing positions at MNCs like IBM. He is an alumnus of Harvard University and the University of Cincinnati. Unlike other billionaires, he says “My success so far has mainly been because I have very little attachment for money. I definitely do not feel like a billionaire even with a billion-dollar fortune.”

With a rise in his fortunes, Vinod Khosla’s net worth has swelled to $5.3 billion from USD 2.3 billion in 2020. Sun Microsystems’ ex-cofounder Vinod Khosla is now the second richest of all Indian Americans, according to Forbes 2022. An alumnus of Mount St Mary’s School in New Delhi, he studied at IIT Delhi, Carnegie Mellon University, and Stanford Graduate School of Business. An article on the founding of Intel in print media piqued his interest in technology when he was a teenager. He established Khosla Ventures, a venture capital firm in Menlo Park, California and co-founded the Indus Entrepreneurs (NiE), a non-profit network of entrepreneurs.

Symphony Technology Group’s founder and CEO, Romesh T. Wadhwani from California has moved to the third rank (from the second rank in 2020) among the richest Indian-origin American billionaires on Forbes 2022, with his net worth having gone up to USD 5.1 billion to $3.4 billion in 2020. Romesh Wadhwani is not just one of the wealthiest Indian American entrepreneurs but a compassionate philanthropist too. His family shifted from Pakistan to India during the Partition in 1947. He is an alumnus of IIT Bombay in electrical engineering and holds a PhD degree from Carnegie Mellon University. The richest Gujarati in America, Romesh T. Wadhwani is a self-made serial entrepreneur. One of the top 10 Gujarati Indian billionaires in USA, he set up the Wadhwani Foundation with several initiatives including the National Entrepreneurship Network to drive socio-economic development in countries like India. In 2012, he opened a research center at the National Center for Biological Sciences in Bengaluru.

Miami-based Rakesh Gangwal, with a net worth of over $4 billion, is the fourth and last richest Indian American among all billionaires in the United States, according to Forbes 2022. A former co-founder of IndiGo, India’s largest low-cost airline, Rakesh Gangwal was the richest of 10 Indian-origin American billionaires in 2018. With a drastic dip in his fortunes due to the pandemic’s impact on aviation, Kolkata-born Rakesh Gangwal saw his net worth valued at $2.3 billion in 2020. An alumnus of IIM Lucknow in mechanical engineering, he studied MBA at Wharton School of Pennsylvania University and fulfilled his American Dreams when he became the Chairman of US Airways Group after a stint in strategic planning for United Airlines in 1984. The richest Indian American Rakesh Gangwal founded InterGlobe Aviation Ltd. in 2000 and co-founded IndiGo in 2006. Today, IndiGo is India’s biggest low-cost carrier in terms of domestic market share.

Three Indian Americans – Neeraj Shah, CEO of Wayfair; Aneel Bhusri, CEO of Workday Inc.; Kavitark Ram Shriram, a venture capitalist – have been dropped from Forbes’ 2022 list of 400 billionaires due to a decline in their net worth and fortunes.

The newcomer on Forbes’ 2018 list of 400 billionaires, Niraj Shah is the third richest Indian-origin American with a net worth $2.8 billion on Forbes 2020. The CEO of Wayfair, an American e-commerce company dealing in home goods online, Niraj S. Shah is the youngest of the wealthiest Indian-origin billionaires in the United States. A Cornell University graduate and a resident of Boston, he co-founded Wayfair in 2002. Wayfair that employs more than 5200 people today generated net revenue of $9 billion in 2019 alone. He featured on the Fortune list of 40 under 40 in 2013 and was made a director of Federal Reserve Bank of Boston.

One of the seven richest Indian American billionaires and entrepreneurs, Aneel Bhusri is the co-founder and CEO of Workday Inc. Born in Pittsford, New York, Aneel Bhusri does also serve on the board of directors at Intel. Among the richest Indian-origin entrepreneurs in America, he is a partner at Greylock which has funded global companies such as Facebook, Airbnb, Tumblr, and Groupon. An alumnus of Stanford University in MBA, he began his career as a corporate finance analyst at Morgan Stanley. His fortunes has swelled from USD 1.85 billion in 2018 to US$ 2.3 billion in 2020. He currently resides in San Francisco, California.

Also Check: Aneel Bhusri Joins the Giving Pledge to Donate Half of His Wealth

With a net worth of $2.3 billion, Kavitark Ram Shriram stands fifth on the list of richest Indian Americans and is one of the well-known Indian-origin investors in California. Among the early investors in Google, Kavitark was born in Chennai and graduated in mathematics at Chennai’s Loyola College. He worked for Jeff Bezos, the founder and CEO of Amazon and the world’s richest billionaire, before making headlines for his investment worth $250,000 in Google. A board member of Google’s parent company, Alphabet, Kavitark Ram Shriram founded Sherpalo, a venture capital firm for technology startups in 2000. He joined the league of Indian American philanthropists by donating a whopping $61 million to Stanford University.

With a net worth of $1.8 billion, Amritsar-born John Kapoor is the fifth richest of Indian American billionaires in USA. A pharmaceutical entrepreneur in Phoenix, Arizona, John Kapoor founded Insys Therapeutics in 1990. Upon completion of his studies on pharmacy at the Institute of Chemical Technology in Mumbai, John Nath Kapoor earned a PhD degree in medicinal chemistry from the University of Buffalo and found ground to make his ‘American Dreams’ come true there. Apart from owning restaurants in San Francisco and Chicago, he heads the John and Editha Kapoor Charitable Foundation for victims of breast cancer.

With a net worth of $2.2 billion, Brian Sheth is the youngest Indian American billionaire on Forbes’ 2019 list of 400 richest Americans. Brian Nirajan Sheth is the co-founder and president of Vista Equity Partners in Austin, Texas. An alumnus of Pennsylvania University’s Wharton School, he is a wildlife enthusiast and conservationist too. Along with his wife, Brian Sheth chairs Global Wildlife Conservation in Austin, an international organization dedicated to wildlife and environment. Prior to plunging into entrepreneurship, Brian Sheth worked at Bain Capital, Deutsche Morgan Grenfell and Goldman Sachs.

The only woman of Indian origin from USA in the Forbes billionaire club, Jayshree Ullal is one of the richest, self-made business women in America. The President and CEO of Arista Networks, a computer networking firm, Jayshree Ullal featured on Forbes 2018 list of billionaires for her net worth $1.43 billion. Born in London and raised in Delhi, she traveled to the US at the age of 16 and graduated in electrical engineering from San Francisco State University. Featured in an article on Indian-origin women billionaires by Travel Beats, Jayshree Ullal got a big break in her career when Cisco Systems acquired Crescendo Communications and made her senior vice president of Data Center & Switching. A master’s in engineering management from Santa Clara University, she was the first woman to receive the Entrepreneurial and Leadership award in Silicon Valley in 1999. Currently, she resides in Saratoga, California.

Co-founder of Syntel, Bharat Desai slipped from the Forbes 2016 list of five richest Indian American billionaires to the tenth richest American billionaire of Indian origin in 2018. Born in Kenya and raised in Ahmedabad, Bharat Desai founded Syntel with $2000 and operated it from his apartment in Michigan initially. An IIT Bombay graduate in electrical engineering, he studied MBA in finance at the University of Michigan’s Stephen M. Ross School of Business. Currently a resident of Fisher Island in Florida, he serves on the board of several institutions including the John F. Kennedy School of Government at Harvard University. He is one of the richest businessmen in the Gujarati American community.

Travel Beats is an Indian American community portal owned by Indian Eagle, a trusted travel booking partner of Indians in USA. Subscribe to our free newsletter and stay tuned to latest news & stories about Indian Americans, Indian events in USA, US visa & immigration news and US to India travel updates.