A new experience is awaiting commuters in subways across the United States. The picture of traveling through subways from one end to the other end is to undergo a change in the coming days. Security technology from biometric systems at major US airports to body scanners at subways is sweeping throughout the country. Airport-style body scanners were tested at the Los Angeles Subway last week.

The Los Angeles Subway is the first US metro to have tested advanced body scanning technology, aiming to improve security by detecting hidden ammunitions. Body scanners are common at airports, to screen travelers. This may be integrated to the existing security systems throughout the Los Angeles subway stations and other city subways based on the results of a two-day pilot program. 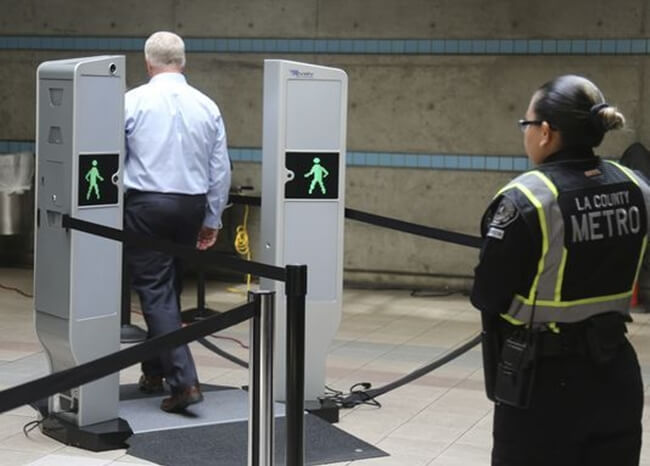 Commuters are required to walk between two tall silver columns which emit short-length radio waves to scan their bodies. The data of body scanning is immediately sent to a computer which works to detect hidden guns or explosive vests or other arms based on data-driven patterns if there is any, according to Los Angeles Times.

The testing of body scanners at the Los Angeles Subway is part of the Metropolitan Transportation Authority’s comprehensive plan to secure all subway stations against threats to public safety across USA.

Subways or metro stations in USA have had no body scanners or metal detectors till date. Traditional technology is not efficient enough to process thousands of commuters pacing fast to catch trains during peak hours of the day.

However, the portable body scanners tested at the Los Angeles Subway can scan 600 people in an hour. These scanners, which notably cost approximately $60,000 each, may fall short of the capability required to process commuters during rush hours at major or the busiest metro stations in USA’s subway transport system. On an average, daily 362,135 commuters used the Los Angeles Subway on weekdays as of July 2016, according to the Wikipedia page of Los Angeles Metro Rail.

Interestingly, the body scanners tested by Los Angeles County Metro Transportation Authority do not require commuters to take off shoes, unpack laptops, and remove jackets or pullovers unlike at international airports. Another interesting fact is that commuters need not wait in queues or panic about missing trains as each scanner is specifically designed to let them pass through it without feeling a backlog.

The tested body scanners have an in-built facial recognition feature, which can raise privacy concerns in commuters if turned on. This feature was not turned on during the testing of body scanners at the Los Angeles Subway, according to the Metro officials. Notably, it was optional for commuters to pass through the scanners during the pilot trial.

Airport-style body scanners have also been tested in Denver and Washington DC subways.

Subscribe to free newsletters of Travel Beats, a leading community portal for Indians in America. A cultural wing of Indian Eagle Travel, the portal publishes visa, immigration, travel and tourism updates, community news, and upcoming Indian events in US cities.