Gangaur is one of the few Rajasthani festivals which are celebrated as colorfully as Holi. Gangaur is not just a festival but a celebration of women’s immovable faith in the Divine for their husbands’ wellbeing and the household welfare. The women of Rajasthan worship Gauri, the goddess of power, abundance and marital bliss on the occasion of Gangaur, a most splendid spring festival in Jaipur, Udaipur, Jodhpur, Jaisalmer and Bikaner. Unrestrained fervor of menfolk and boundless devotion of womenfolk make Gangaur festivity a must-see cultural ceremony. Here are some interesting tidbits to share with you. 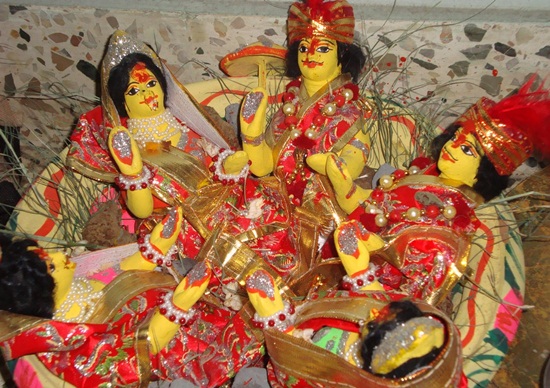 The Gangaur Festival centers on the worship of the deities – Lord Shiva and Goddess Gauri or Parvati. The small effigies of the deities are made of clay or wood. The clay images are immersed into a water body on the last day of the festivity, while the wooden idols are preserved and worshiped every year. The wooden ones are meticulously painted afresh before the ceremony begins. The Gangaur idols are beautifully dressed and worshiped with roli, kumkum, mehendi, haldi, etc. 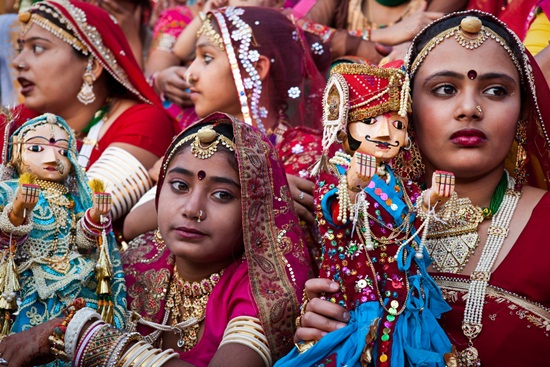 The Gangaur festivity spans for 18 days. The ceremony begins on the next day of Holi festival. The newly married girls are obliged to worship the deities for 18 days and keep fasting for half of the day till the festival is over, in the first year of their marriage. The rituals are the same for unmarried girls and would-be married girls who wish to observe the ceremonies. The other married women worship the deities only on the third day of the festival. They wear red saris or ghagras with golden zari boder along with gold & silver jewellery. They flaunt borla in the parting line of the hair and kumkum on the forehead. 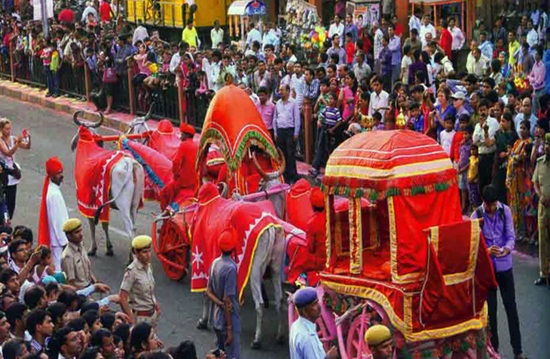 The Gangaur festival ends with the departure of the deities, a grand ceremony which is observed through a spectacular procession. It is the most colorful, joyful and magnificent ceremony to behold. The ethnically dressed married women walk down the street, carrying the deities on their heads during the procession to a garden with a pond or well. Some other women sing folk songs and perform folk dance moves adding to the grandeur of the procession. 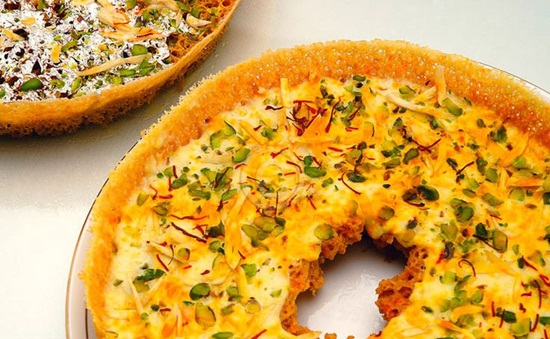 Kheer, choorma, halwa and puri are some of the traditional delicacies on the Gangaur festival menu in Rajasthan. Ghevar, an essential culinary part of the festivity, is one of the most famous Rajasthani sweets. It is made in households and sold in markets during the festivity. It is customary for the people to sweeten the mouths of relatives and friends with slices of ghevar.

Mehendi is one of the traditional rituals of the Gangaur Festival. It is a custom for both married women and unmarried girls to beautify their hands with Mehendi designs. Mehendi signifies good luck and bliss to the married women of Rajasthan. They worship the goddess Gauri with their colorful hands and seek blessings for the wellbeing of their husbands. Even young girls decorate their little hands with Mehendi on this occasion.

Travel Beats is an overseas Indian community portal on culture, travel, and community news by Indian Eagle, a leading international travel organization making air travel to India cheaper and better. Indian Eagle issues cheap flight tickets to Jaipur and other cities for overseas Indians, in order to help them connect with their roots.