If you are in search of an offbeat India, make your way to rural areas in Indian states. Some remote villages in each state of India have their own offbeat culture, traditions, fairs and festivals. The rural backwaters of Rajasthan present a micro picture of the offbeat India. Gogamedi Fair in rural Rajasthan is one of the most offbeat festivals in the country. Indian Eagle penetrates through Gogamedi village to explore the origin, legend, religious value, social significance, offbeat aspects and other interesting tidbits of the fair. 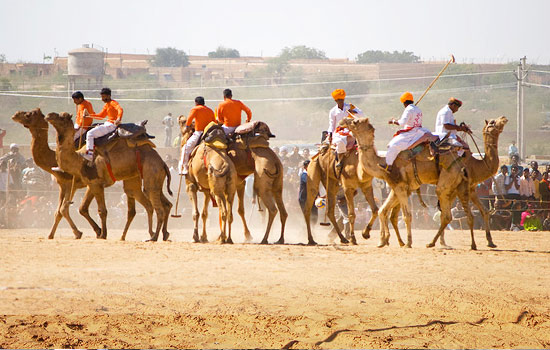 Gogamedi Fair, one of the folk events in the state of Rajasthan, gives an offbeat picture of India. The fair is held in honor of the Serpent God Gogaji, every year. One of the possible reasons behind the initiation of Gogamedi Fair is an age-old belief that chanting of Goga Ji Maharaj’s name puts an end to one’s suffering from snakebite and heals the wound. The fair is nothing but a ritualistic tribute to the Serpent God in rural Rajasthan.

What makes the Gogamedi Fair an attraction to outsiders including visitors and tourists is the charm of ceremonial preparations and the spell of performances by folk artists. The natives of Gogamedi village in Hanumangarh district, Rajasthan make special culinary offerings to Goa Ji Maharaj as a ritual of worshipping the deity. The food items are cooked with a mix of sugar, coconut, honey and other local ingredients.

Apart from the ceremonial and culinary aspects of the fair, the cultural performances appeal to the visitors. The folk music and dance performances give a micro picture of Rajasthan’s regional culture. Handicraft artists and rural craftsmen from the neighboring villages sell their merchandise in the fair. The cattle exhibition is an offbeat but interesting part of Gogamedi Fair. Local animal traders visit the fair and deal in camels.

Jaharveer got a sniff of their evil intentions and put his brothers to death. Out of the shock on hearing the news of her two younger sons’ death, his mother ordered Jaharveer to leave the kingdom. He obeyed her offer and took shelter in a forest. But, he would meet his wife at times. Unfortunately, he could not keep his meetings with wife a secret to his mother. She discovered it eventually. Jaharveer overwhelmingly felt guilty of disobeying her order, and he therefore got himself buried in the soil at Gogamedia.

Jaharveer was known for his love for livestock and devotion for cows (cow is a sacred animal according to the Hindu scriptures). His dedicated service to cows earned him the title “Goga Ji”. He commissioned the construction of 7 colossal cowsheds for more than seven thousand cows during his regime. Thus, Goga Ji was consecrated to the status of a god for his good deeds.

The temple of Goga Ji Maharaja makes an interesting sight to behold during the fair. Devotees from all over Rajasthan, Bihar and Uttar Pradesh visit the temple to offer tributes. They wear yellow clothes on this occasion. The way they come to the temple holds an attraction. They perform a folk dance and chant hymns in praise of Goga Ji Maharaja all the way to the temple from where they start walking in the village. Surprisingly, some devotees bring snakes along with them.

A socially interesting aspect of the Gogamedi fair is that the celebration of worshipping the Goga Ji deity is supposed to be an ideal opportunity for girls and boys to choose their life partners. Matchmaking is done through fun activities which are sure to amaze and amuse tourists. The cultural performances will fill you with euphoria, and the offbeat rituals will feel you with awe during the fair.

The Gogamedi Fair is scheduled to be held from August 18 to 20 this year. Gogamedi Village is 350 to 360 km away from the capital city Jaipur. Many foreign tourists, photographers, documentary makers and story writers in search of an offbeat India visit the Gogamedi Fair in Rajasthan every year.

Most of them log on to IndianEagle.com and book their cheap flights to Jaipur online. Indian Eagle offers cheap airfares to India throughout the year. Why not check it yourself?