What is unique to Onam, the biggest festival of Kerala? It is Onam Sadya, a festive meal of significance. It is the soul of Onam celebration at home and abroad and wherever the Malayali community is. As the festival marks the beginning of a new year for Keralites, celebrates the new harvest of the year and commemorates the visit of their most worshipped King Mahabali, Onam Sadya is evidently not just a festive meal. 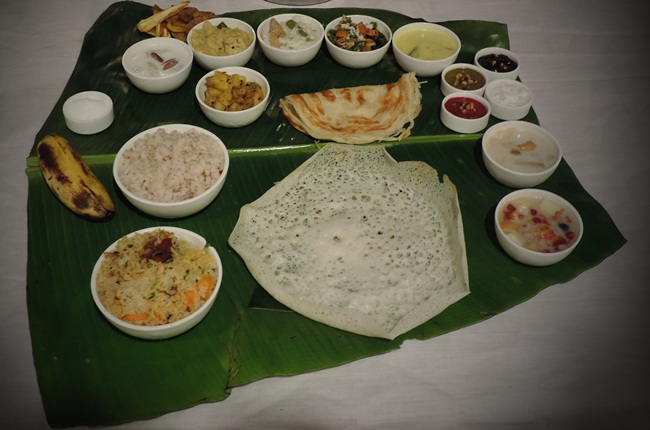 Onam Sadya and the Legend of King Mahabali

Onam Sadya owes its significance to the myth of Kerala’s legendary King Mahabali, who is also referred to as Maveli and Onathappan in religious as well as non-religious literature. Mahabali was the chief of the Asura (demon) community in his time. Kerala was a beautiful, peaceful and prosperous kingdom when he was in power. Neither crime nor corruption was in his regime. There was no social hierarchy on the basis of economy or caste. Equal treatment of the rich and the poor was one of the building blocks in the societal system. King Mahabali used to be lavished with respect for his wisdom, generosity, judiciousness, impartiality and farsightedness. His rule is believed to be the golden era of Kerala.

Being grandson of Prahlad, Mahabali was an ardent devotee of Lord Vishnu, the preserver of the Universe in the Hindu scriptures. His fame and popularity was a concern with Gods who took it as a threat to their supremacy and sovereignty. Gods sought Lord Vishnu’s intervention to subdue King Mahabali’s growing popularity and curb his reign. Being charitable, King Mahabali used to grant boons to Brahmins after his morning prayers every day. Lord Vishnu disguised himself as a poor, dwarf Brahmin, which is known as his ‘Vamana’ incarnation, and descended to earth.

READ ALSO The Taste of Kerala

Under the guise of a poor Brahmin, Lord Vishnu asked the King for a piece of land as much as his three steps would cover. Despite warnings by his adviser, the King promised to give what the Brahmin wanted. The dwarf Vamana took three cosmic steps. He covered earth and the sky in the first and second steps respectively. In the third step, he put his foot on the head of the King, pushing the King to the nether land (patala). Then the dwarf Brahmin revealed his true identity and expressed his pleasure to see the King’s unconditional displeasure.

Out of his attachment with the kingdom and selfless love for the people, King Mahabali made a request to let him visit Kerala once in a year. Lord Vishnu accepted the request and granted him a boon that he would be worshipped as well as loved his people for ages. At the time of his departure from Kerala, the King blessed the people to remain happy, prosperous and well-fed for generations. His visit to Kerala is celebrated as Onam Festival every year. Onam Sadya is part of the elaborate preparations that the people of Kerala make in honor of their King and convince him that they are happy.

Evidently, Onam Sadya is a symbol of the Malayali people’s happy living. Both the rich and the poor are so serious about the significance of Onam Sadya that they prepare this festive meal for grand feasting. A single course of Onam Sadya has 24-28 dishes. The preparation can be so elaborate that even 64 dishes are cooked for a meal.

Eleven dishes are essential prepared for Onam Sadya. Rice, coconut gratings, coconut milk and coconut oil are the basic ingredients in most of the dishes. The meal is traditionally served on banana leaves and consumed in one sitting. Both rural and urban Keralites eat the festive meal with hands. Spoons and forks are not used at the time of feasting in most households.

The Onam Sadya items are served one by one in an order. Even the age-old tradition of serving a particular dish on a particular part of the banana leaf is strictly obeyed. The feasting begins with the ritual of offering the Onam Sadya items to Lord Ganesha first. The festive meal begins with rasam (soup) and ends with payasam (dessert). The main dish is boiled rice served with uppari, sambar, aviyal, parippu, pullisseri, olan and pickles.

Other Interesting Stories of Kerala

Indian Eagle promises to make air travel to India cheaper than ever. We rejoice in your happy trips by booking cheap fights to Kerala from USA. Happy Onam!

One thought on “Onam Sadya in Kerala: Legends & Traditions”