Pilgrimage to the Tirupati Balaji Temple in Andhra Pradesh is incomplete without a piece of laddu, the most sought after prasadam at one of the richest Hindu temples in the world. It has been more than 300 years since laddu was introduced in the naivedhyam to Lord Venkateshwara in August 1715. Surprisingly, this sacred prasadam never falls short of demand even during the peak season of pilgrimage to the hilltop Tirumala shrine. In 2018, Brahmotsavam, the biggest crowd-pulling annual celebration at the Tirumala Temple, saw a record-breaking sale of 5,13,566 laddus on a single day. This pre-pandemic sale is still a landmark event in the history of the temple.

The whole-year-sale of the Tirupati Laddu contributes minimum Rs 300 crore to the Tirumala Temple’s annual revenue of Rs 3000 crore on average. Travel Beats, a leading community portal for Indians abroad, shares with you some interesting facts about the Tirupati Laddu also known as Sri Vari Laddu. 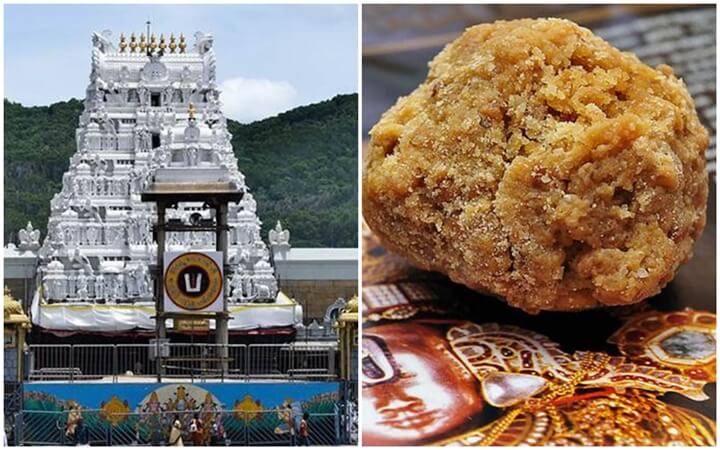 The making and distribution of the sacred prasadam in colossal quantities makes an interesting case study for management students. The Tirumala Temple kitchen where a daily average of 3 lakh laddus and other prasadam are made is called Laddu Potu. Equipped with modern amenities, the Potu can produce 800,000 laddus a day. There are three conveyor belts for transferring ingredients from one end to the other. About 10 tons of gram flour, 300-500 liters of pure ghee, 700 kg of cashew nuts, 540 kg of raisins, 150 kg of cardamom, and 500 kg of sugar candy go into the making of the Tirumala laddu prasadam every day.

Interestingly, the Tirupati laddu undergoes rigorous checks on the index of quality, calorie count, and self-life at a dedicated testing lab before making it to the deity as part of the daily naivedhyam. Not just the final product, but also each of the ingredients used in the making of the holy prasadam undergoes multiple quality checks at the lab. It is said that the secret recipe of the signature laddu dates back to the Pallava dynasty that ruled the southern Telugu and Tamil regions for about 600 years (from 275 CE to 897 CE).

The Tirupati Temple laddu prasadam not only satisfies devotees’ yearning for divine bliss, but also supports the local economy. The daily making of 300,000 laddus or more and other prasadam generates employment for hundreds of local people. About 600 people, including 270 cooks, are employed in the prasad-making unit of the Tirumala Temple kitchen that works three shifts spanning 20 hours a day. Some of them are permanent workers, while some work on a contract basis. More contractual workers are roped in to ramp up the production of laddus for an influx of devotees during the Brahmotsavam. Some volunteers from the Vaishnava community come forward to offer free service in the temple kitchen on festive days. 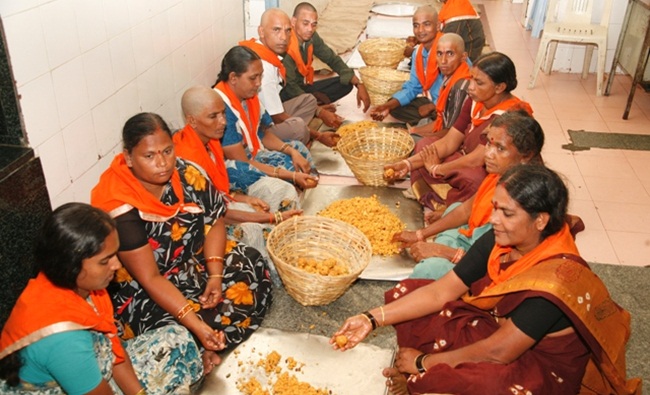 Until before the pandemic, the world renowned Tirupati Temple laddu used to be made and distributed in three categories: the prasadam laddu, the big laddu, and the small laddu. The Tirumala Temple’s Potu (kitchen) used to produce some 3000 ‘big laddus’ weighing 700 gram each and 75000 ‘prasadam laddus’ weighing 25 gram each on a daily basis, in addition to the continued production of 3 to 3.5 lakh ‘small laddus’ weighing 175 grams each. Among devotees, the VVIPs would get one big laddu free of cost. The special ‘darshan’ ticket holders would get the same for Rs 200 each before the pandemic. Rs 170 was the cost of making a big Tirupati laddu back then. The temple authorities would spend Rs 39 for making a single unit of the most sought after small laddu.

Until the end of 2019, the temple administration offered two small laddus at a subsidized price of Rs 10 each to ‘Divya darshan’ and ‘Sarvadarshan’ devotees. A maximum of two extra laddus were available for Rs 25 each. Devotees wishing to take more prasadam home, in addition to the aforementioned quantity, they would have to pay Rs 50 for a single piece of the small laddu. The complexity of making laddus in three different categories, and the subsidized pricing under different ‘darshan’ systems had been incurring an average loss of Rs 250 crore every year until the entire system, from production to distribution, was simplified by removing multiple size categories and differential prices, right from the beginning of 2020.

Now every devotee receives the blessing of Sri Venkateshwara Swamy in the form of a Tirupati laddu (free of cost) after darshan of the deity in the temple. In addition to the free prasadam, any number of laddus can be availed for Rs 50 each in the open counters.

The Tirupati laddu got a Geographical Indication (GI) tag in 2009, which prevents sweet outlets of all sizes from selling counterfeit versions of the laddu. In 2013, the Madras High Court banned the sale of laddus with the brand tag ‘Tirupati’ at a Chennai-based sweet store, in an effort to preserve the sanctity of the Tirumala prasadam as it is touched at the holy feet of Lord Venkateshwara being distributed to pilgrims.

In August 2021, the Tirupati Temple administration took a step towards the green future by replacing single-use plastic bags with biodegradable bags for devotees to carry the prasadam all the way back home. There is a dedicated counter on the premises where devotees can buy these eco-friendly bags before moving on to the laddu counters. Made of corn starch at a lab of the Defence Research and Development Organization (DRDO) in Hyderabad, the bags are not harmful for both environment and cattle. The temple authorities had distributed the prasadam in about 10 crore single-use plastic bags during the period from 2014 to 2019.

How to reach Tirupati Balaji Temple

2 thoughts on “A Sneak Peek into the History, Production, Sale of Tirupati Laddu: Interesting Facts about Holy Prasadam”