Vrindavan Chandrodaya Mandir in Mathura is not only India’s but the world’s tallest temple under construction at a whopping cost of INR 700 crore which is equivalent to 102 million US dollars. Speculated to be one of the most expensive temple buildings in the world, this ISKCON temple will boast an astounding height of nearly 700 feet on completion. 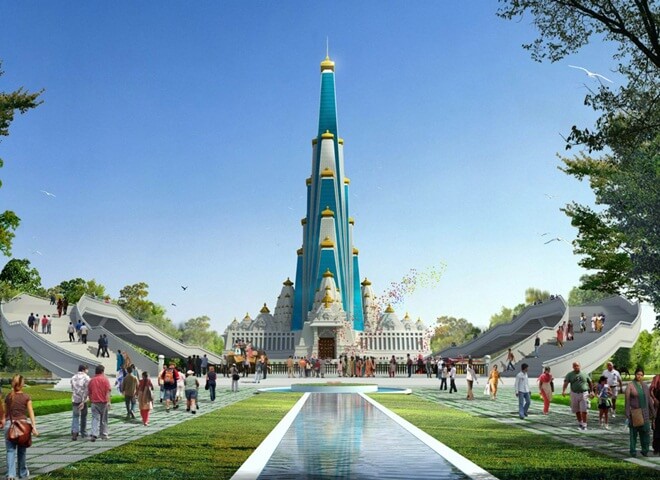 The forests will be modeled on the gardens described in the stories of Lord Sri Krishna. Each forest will consist of orchards, lush vegetation, green pastures, waterfalls, lotus ponds, musical fountains and artificial hillocks. The tallest structure of Vrindavan Chandrodaya Mandir in Mathura will have four temples on its four ends. The temples will be dedicated to Krishna Radha, Krishna Balram, Chaitanya Mahaprabhu and Swami Praphupada.

There will be a heritage museum and a viewing tower with telescopes in the temple complex. Visitors can catch panoramic views of the premises, Vrindavan town and the Yamuna River from the viewing tower. The main tower of the temple will have an elevator. There will be a light and sound show on the universe’s planetary systems, as described in the Vedic literatures of India, for visitors. 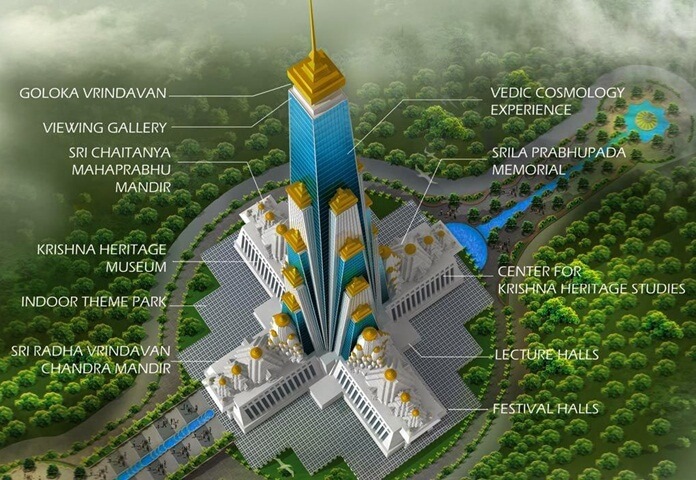 Various accommodation options will be there for visitors in order to facilitate their stay for a few days. The complex will also feature a skywalk from one end to the other end. The temple authority may organize a night safari for devotees on demand, among other facilities. There will be a helipad too.

The complex of Vrindavan Chandrodaya Temple in Mathura will have a 12-acre parking lot and a Krishna theme park with fun rides for kids as well as laser shows. Visitors will be allowed to join celebration of all Indian Hindu festivals and participate in spiritual events at the temple complex throughout the year.

Reportedly, welfare programs for the underprivileged children and widows of Vrindavan will be on the agenda of the temple authority.

Vrindavan is a 3-hr drive from New Delhi IGI Airport, which is well connected with major US cities by Air India, Jet Airways, British Airways and other airlines. The 210-meter tower of Vrindavan Chandrodaya Mandir in Mathura will surpass the height of Qutub Minar by three times. You will be able to marvel at the world’s tallest temple in India in 2022.