The “Outstanding American by Choice” award to seven Indian Americans came like a new ray of hope penetrating dark clouds of despair and disdain in the current tempestuous political milieu of America. Though the Indian American community is a minority constituting only 1% of the US’ total population, they undeniably make significant contributions to the socio-economic progress of USA. The recent recognition of seven Indian Americans has brought some peace of mind amid uproars created by the RAISE Act to limit green cards, the executive orders on immigration, H1B visa reform bills, and administrative processing of work-related immigrant visas in the Trump administration.

The United States Citizenship and Immigration Services (USCIS) honored 7 Indian American citizens of the US with the “Outstanding American by Choice” award in recognition of their responsible citizenship, professional achievements, civic participation, and commitment to the Constitution of America. Out of the seven, six were born in India. 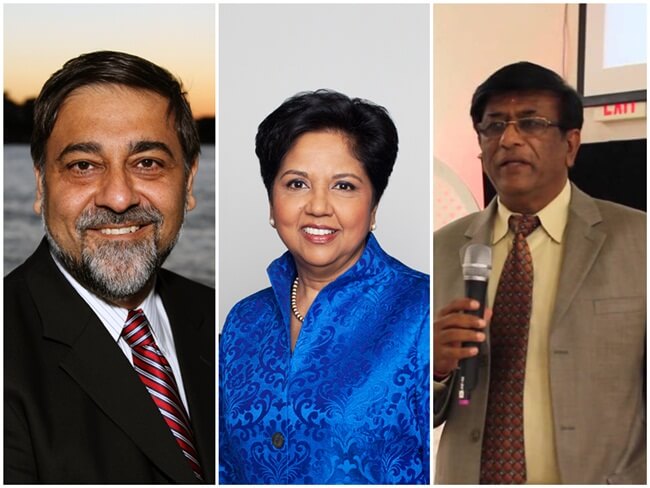 Among the Indian American recipients of the Outstanding American by Choice award, Indra K. Nooyi is a widely known name and face. The Chairman-elect and CEO of PepsiCo, Indra Nooyi has consistently been on Forbes’ list of 100 most powerful business women in the world. In 2016, Indra Nooyi made headlines as the leading alumni donor of her alma mater, Yale School of Management. Born in Tamil Nadu, India, she was the first woman to have received the deanship of a top business school.

A noted Indian American entrepreneur and philanthropist from Tampa, Dr. Kiran Patel is another outstanding American by choice. The Chairman and President of Freedom Health, Inc. and Optimum Health, Inc. in Florida, Dr. Kiran Patel believes that philanthropy is his responsibility. He built the WellCare Management Group with a turnover of over $1 billion, and created hundreds of jobs in USA. His non-profit organization, the Patel Foundation for Global Understanding funds a number of initiatives in health, education and culture. It also offers an annual scholarship to the underprivileged youth in USA. Also Check Dr. Kiran Patel to open osteopathic medical school in Tampa for poor Indian students.

One of the Outstanding American by Choice awardees, Vivek Wadhwa is a globally known writer, researcher and entrepreneur. Based in Menlo Park, California, he is a leading columnist for the Washington Post and a Director of Research at Duke University’s Pratt School of Engineering. His books The Immigrant Exodus: Why America Is Losing the Global Race to Capture Entrepreneurial Talent, and Innovating Women: The Changing Face of Technology, are among the bestsellers. Foreign Policy magazine named Vivek Wadhwa among the “Top 100 Global Thinkers” in 2012, and he made it to TIME magazine’s 2013 list of “Tech 40.”

Among the Indian American awardees of the Outstanding American by Choice, Dr. Amarpreet S. Sawhney is an eminent entrepreneur and innovator. The President and CEO of Ocular Therapeutix, Inc. He owns over 120 patents for innovative medical devices that have facilitated surgical procedures for millions of patients the world over. Dr. Amarpreet Sawhney has founded six companies and created hundreds of employment opportunities in the health and medical industry of USA. He also fosters the culture of innovation and the spirit of entrepreneurship by offering mentoring programs. He treasures several awards, including the Frost & Sullivan Product Innovation award, and the Ernst & Young Regional Entrepreneur of the Year award.

An Outstanding American by Choice, Dr. Rahul M. Jindal is a Professor of Surgery and Global Health at George Washington University in Washington, DC and a transplant surgeon at Walter Reed National Military Medical Center in Maryland. He has performed many critical surgeries till date, including the world’s first surgery to link a tube with blood vessels in the damaged liver of an interminably ill 6-year-old boy in the late 1990s. He also successfully performed the first living kidney transplant in Guyana, South America. Dr. Rahul M. Jindal has given a new lease of life to many through his medical innovation and excellence. He traces his roots to Ahmedabad in the Indian state of Gujarat.

Dr. Renu Khator is the first foreign-born Chancellor and President of the University of Houston (UH). In 2016, she was inducted into the Texas Women’s Hall of Fame for her significant contributions towards ensuring the academic progress of Texas and the prestigious position of Houston University among the world-class universities. Dr. Renu Khator hails from the Indian state of Uttar Pradesh where Indian American Dr. Frank Islam belongs to. She relocated to the United States at the age of 18. The impact of globalization on environment, and water policy are her areas of expertise. She has contributed several articles to national and international journals. She is a published author too.

Eminent entrepreneur Farooq Kathwari from Connecticut is the seventh recipient of the Outstanding American by Choice award. Born, brought up and schooled in Kashmir, Farooq Kathwari is the Chairman, President and CEO of Ethan Allen Interiors, Inc. He is a board member of several nonprofit organizations, including the International Rescue Committee, the National Retail Federation, the United States Institute of Peace and likes.