Home / News / SevaTruck: A Sikh American’s Langar on Wheels Cooks and Serves Fresh Meals to the Needy for Free

Swami Vivekananda said, “It is only by doing good to others that one does good to oneself.” This maxim is true about Sonny Kakar, a Sikh American of Indian origin, who has imbibed the value of serving the needy. A resident of Washington DC, Sonny Kakar operates a unique food truck to distribute fresh, nutritious meals to the hungry for free in the US capital region where one in every seven households grapples with the pangs of hunger.

Aptly named SevaTruck, Sonny Kakar’s free-meal food truck in the Washington DC metro area and Michigan  is part of SevaTruck Foundation, a 501(c)3 nonprofit organization with the vision and mission of mitigating hunger in local communities by providing nutritionally balanced vegetarian meals to anyone in need. Seva Truck has distributed 50,000 free meals to this day. 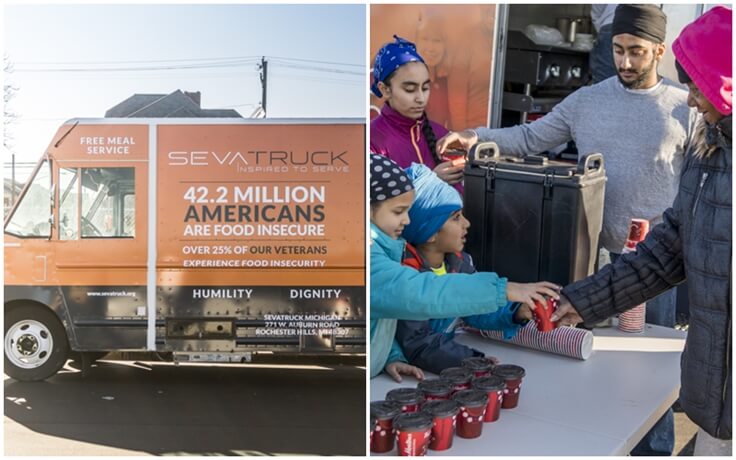 Three years ago, Sonny Kakar bought an old FedEx truck, got it painted orange, named it SevaTruck and started operating it to serve the kids at hunger risks in underprivileged communities. In only three years of its inception, Sonny Kakar’s SevaTruck in Washington DC became an emblem of humanity, a symbol of selfless service and a pride of Indians in the USA.

Following the success SevaTruck has achieved in accomplishing its hunger-mitigating mission to some extent in the D.C. metro area, Sonny Kakar started the same initiative in Michigan. SevaTruck Michigan has been serving nutritious meals for free in over 35 locations across Michigan, including Detroit since 2017, irrespective of race, religion, gender and age.

Children and veterans in need are the primary targets of the Free Meal Service campaign run by SevaTruck Foundation. Sonny Kakar’s Seva Truck has helped to increase the attendance by 30% in one of the underserved schools by supplying fresh, nutritious meals on a daily basis. 12.9million kids in the United States are in the grips of food insecurity.

To combat food insecurity in Washington DC metro area, the nonprofit has partnered with local food banks and several other nonprofit organizations. Sikh Indian-American Sonny Kakar’s free-meal initiative has largely benefited the US Vets which runs an 85-bed facility for homeless veterans and the Latin American Youth Center in D.C. which provides support to more than 4000 underprivileged youths.

The success of Seva Truck is measured not only by the number of meals served, but also the impact the free-meal initiative makes on empty stomachs. Based in Fairfax, Virginia, SevaTruck Foundation is planning to expand its operations in other US cities in a phased manner and is looking to spread happiness.

This inspiring story of SevaTruck USA is part of our continued effort to promote good deeds of Indians or Indian-origin people in USA, at Travel Beats, a leading community portal for Indians in the US. Travel Beats is a subsidiary of Indian Eagle Travel, a most trusted international air travel booking partner of Indian Americans.

One thought on “SevaTruck: A Sikh American’s Langar on Wheels Cooks and Serves Fresh Meals to the Needy for Free”