Gun violence in the United States has become a catastrophic threat to the American civilization, resulting in hundreds of thousands of fatal injuries and deaths over the years. Though it has inflicted severe wounds to the being of the nation and shaken the collective conscience of the people innumerable times since the University of Texas Tower Shooting in 1966, there is no concrete sign of the waning of gun violence in America. The recent homicides – the Parkland School shooting in Florida and the Santa Fe High School shooting in Texas – bear witness to the proliferation of gun violence in the USA. The more we talk about it, the more we feel depressed.

Among the myriads of voices protesting unchecked prevalence of gun violence in the US is a 63-year-old Indian American with two artificial knees. A realtor in Arizona, Raj Kohli is an activist too. He set out on a mission to raise awareness about the rampant gun violence and mass shootings in the US which he calls home, by peddling a bicycle from the Trump Tower in New York to Washington DC. 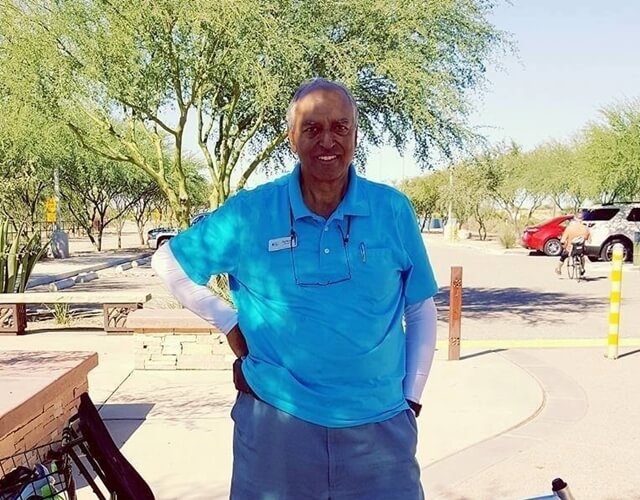 Just as little drops of water make a mighty ocean, he believes that his individual mission connects with the public unrest against gun violence in America. Raj Kohli started the bicycle ride on the Memorial Day, May 28 to send out his message, “Charity begins at home.”

“Gun violence in the United States claims over 35,000 lives every year. We have not stopped it yet. While the US government has spent more than $7 trillion on fighting wars against terrorism overseas, it has done a very little to control gun violence and curb homicides under its own roof,” Indian American Raj Kohli was quoted in a press release.

A native of Uttar Pradesh in India and a resident of Tucson in Arizona, Raj Kohli does not mince words while saying, “All the promises made the current US government to bring in rigorous gun laws post the Florida Parkland school shooting have taken a backseat after President Trump’s meeting with the NRA (National Rifle Association) executives in Washington DC.”

During his bicycle ride from New York to Washington DC, Raj Kohli is pleading with people to boycott NRA and stop buying gun stocks as well as investing in funds with gun related stocks. He opined precisely, “The more guns we have, the more people will die.  It’s a numbers game!”

The current bicycle ride against gun violence in the USA is not his first undertaking. He embarked on several such missions for world peace in the past four decades. In 2017, he peddled a bicycle from Tokyo to Hiroshima to spread the message of peace and harmony on the 72nd anniversary of the bombing of Nagasaki and Hiroshima in the World War II. Raj Kohli’s bicycle ride to Malaysia, Singapore, Indonesia, Thailand, Hong Kong, Philippines, China, Taiwan, South Korea and Japan from 1981 to 1983 was his first mission to promote world peace.

Indian American Raj Kohli’s crusade against violence, terrorism, extremism and inhumanity will continue as he plans a bicycle ride throughout Europe to tell the stories of the survivors of terrorist attacks, later in 2018.

We at Travel Beats, an Indian American community portal by Indian Eagle Travel booking best flights to India, believe in the power of inspiring stories. We strive to spread the word about good work by Indians worldwide. You can send positive stories of humans like Raj Kohli to share@blogbox.indianeagle.com.