Home / News / Indian American Dr. Shenika Shah is Promoted to Rank of Captain from Second Lieutenant in US Army

Early this month, the Indian American community rejoiced in Anmol Narang’s entry to the elite club of graduates from the most prestigious US Military Academy at West Point, New York. Indian-origin Anmol Narang is the first Sikh woman to have become a Second Lieutenant upon her successful completion of the West Point cadetship. There is no death of good news for Indian Americans and Indian Diaspora in general this pandemic season.

Indian American Dr. Shenika Shah being promoted from a Second Lieutenant to a Captain in the US Army calls for (virtual) celebration amid the lockdown and stay-at-home restrictions. She graduated from the medical school with a degree in Osteopathy medicine this year – one of the stepping stones towards accomplishing the mission of her life. An outstanding citizen of New York, Dr. Shenika Shah has recently started serving medical needs of soldiers and their families in an army hospital in the USA. 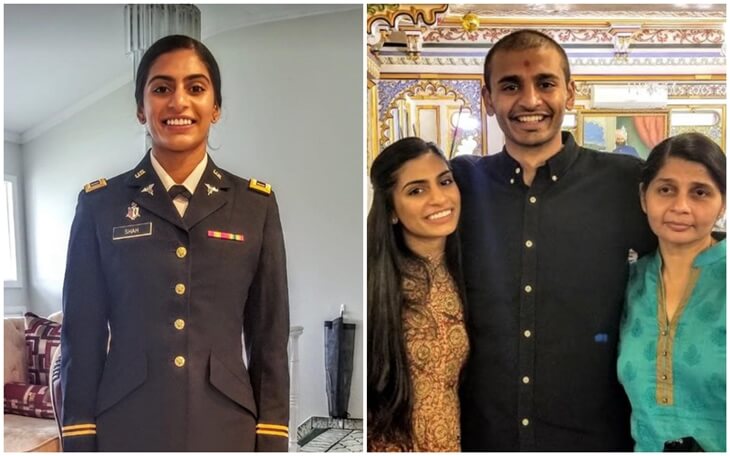 A steadfast believer of “In the joy of others lies our own,” she wishes to serve the affected as the ultimate practice of her life. She aspires to establish herself as a noted OBGYN physician and surgeon. Born to an immigrant couple from Mumbai, Captain Shenika Shah has grown up experiencing the highs and lows in the lives of immigrants in New York, a sanctuary city.

Besides having achieved a milestone in medicine and the US Army, she has earned distinction in Bharatanatyam and Karate. Right from childhood, she started pursuing extracurricular activities to build her identity not merely as a US-born kid of immigrants but as an achiever. After graduation from West Point, she also attended New York Institute of Technology. Her Bharatanatyam graduation ceremony was attended by several Indian American community leaders.

Those, who have seen Shenika growing up and have been close to her family, are eloquent about her achievements and accomplishments. She exemplifies the importance of being culturally rooted through Bharatanatyam and the joy of giving back to the community in the US where she was born and brought up. She is not only inspiring her current generation as a captain in the US Army but also instilling Indian values in her service to the affected during the COVID19 crisis.

Also Check: All about US-India Travel amid COVID19

2 thoughts on “Indian American Dr. Shenika Shah is Promoted to Rank of Captain from Second Lieutenant in US Army”