“United we stand, divided we fall.” The maxim is true about Indian American siblings – Kushaan Saran and Medhnaa Saran – who stand united with survivors of child labor and victims of human trafficking through their nonprofit endeavor to combat such crimes against humanity.

Residents of Virginia, Kushaan and Medhnaa are the co-founders of Touch of Life Foundation, a 501c3 charitable organization that works to rescue victims of indentured servitude and empower them to fight for their rights to education, equality, freedom and dignity. 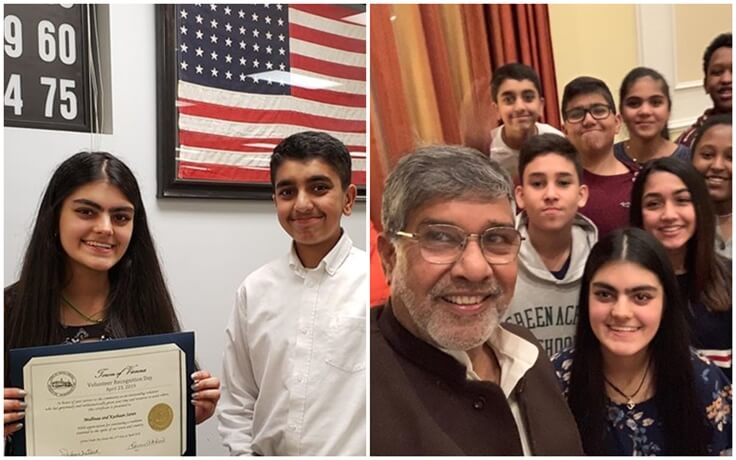 The foundation of Medhnaa and Kushaan Saran’s selfless service to the survivors of child labor and human trafficking was their trip to India and visit to Nobel laureate Kailash Satyarthi’s ashram in Jaipur eight years ago. Very young school goers back then, the Saran siblings could not make out what an orphanage is, why many of the ashram children looked vulnerable, and why they gave them a blank look.

By the time Medhnaa and Kushaan grew up a little to understand such social evils as human trafficking for sexual and physical exploitation, they realized that they had met the children who were rescued from the traps of child labor in different parts of the country. That was the moment of epiphany when they felt for those poor children and decided to stand by them.

The Saran siblings started helping the children by raising funds, collecting clothes and other essentials for them. Their baby steps towards helping the kids became a philanthropic stride which gave birth to the nonprofit, Touch of Life Foundation in Virginia in 2016. The donation to Touch of Life Foundation goes to Kailash Satyarthi’s ashram in Jaipur for the children’s welfare programs.

The way Kushaan, a high school freshman and Medhnaa, who is in the 10th grade, raise funds rhymes with the maxim, “Where there’s a will there’s a way.”  They hold breakfast and bake sales at schools and community centers, and donate the proceeds to support the needs of the rescued kids. This year, they held a Diwali party at the Sherwood Community Center in Fairfax for the same noble purpose. Thus, Touch of Life Foundation raises nearly $25,000 every year.

The Saran siblings’ Touch of Life Foundation is recognized by Amazon for AmazonSmile program that donates a portion of the proceeds from the sales of the products to the nonprofit of a shopper’s choice. Anyone looking to support survivors of child labor and human trafficking can contribute to Touch of Life Foundation while shopping on smile.amazon.com at no extra cost.

A sophomore at Pinnacle Academy in Northern Virginia, Medhnaa Saran is currently working on the “Not My Child” campaign, in collaboration with schools, to make children learn to notice the signs of child labor and trafficking in their neighborhoods. Good at mentoring in math and science, she does also speak to congressmen to make laws stricter for perpetuators of crimes against children.

The Saran siblings have worked hard to make the much needed awareness about dangers of child exploitation a part of the curriculum throughout their school district. They are striving to take it to the state level.

This exclusive story is part of our continued effort to promote good deeds of young Indian Americans, at Travel Beats, a leading desi community portal for Indians in the US. Travel Beats is a subsidiary of Indian Eagle Travel, a trusted international air travel booking organization for cheap flights to India from USA.