Home / News / After 11 Years, Indian-origin Siblings Travel from USA to Clear Their Debt to a Peanut Seller in India

In 2010, an Indian American family was on a visit to their hometown, Kakinada in Andhra Pradesh. Kakinada is a coastal city with balmy beaches running into rural outskirts, such as U Kothapalli. The family visited the U Kothapalli Beach to unwind on sands, on the eve of their return flight to USA from Hyderabad. While strolling on the beach, the siblings – Nemani Pranav and Suchitha – stopped by a peanut vendor, Ginjala Pedda Sattaiah, and took a packet of peanut from him. 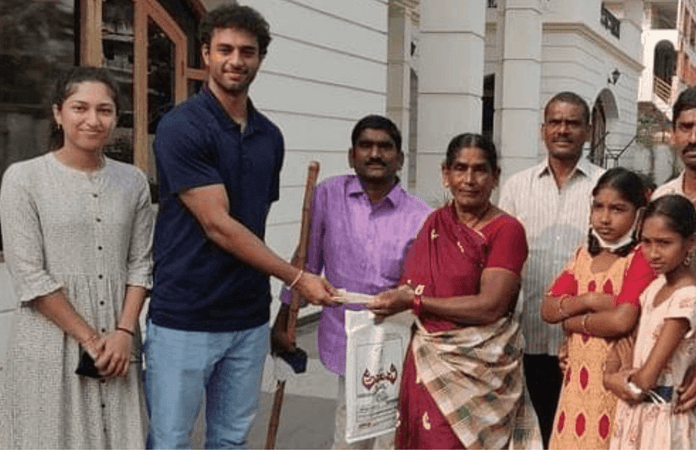 The next moment their father discovered that he forgot to carry his wallet and had no cash in his pockets. There was no digital payment app 11 years ago. He told the children to return the peanut packet to their dismay. On seeing the children’s unhappiness over this, the vendor denied to take the peanut back and said, “The payment does not matter.” He requested their father to let the kids enjoy the moment. The family thanked him for the favor and took a photo of him with the phone camera, promising to pay him the next day.

But the siblings’ father could not make it to the beach before leaving for the airport. The family returned to the US with feelings of gratitude towards Sattaiah and a heavy heart over the unfulfilled promise. Though the family visited the hometown on several occasions in the past 11 years, neither Sattaiah was found on the beach nor his whereabouts could be traced. The sibling duo grew up nurturing fond memories of the peanut vendor’s kindness. They did not let the dust of time to fall on the promise to be kept.

Nemani Pranav is now 21 years old and his sister Suchitha is 18. They recently visited Kakinada. Before their travel to India from USA, their father sought the help of D Chandrasekhar Reddy, the MLA of Kakinada City Assembly Constituency, to help them trace Sattaiah, the peanut seller. He sent the photo of Sattaiah that he had clicked way back in 2010 to his MLA friend. The MLA uploaded the photo on his Facebook account, sent its copies to the local police stations, and also asked his PA to coordinate with the police in tracing Sattaiah.

Finally, the peanut seller’s residence and family were found after a few days of search, but he was no more. The Indian-origin siblings were eager to meet him again after so many years. Their heart missed a beat over learning about his demise. They paid Rs 25,000 to the bereaved family and cleared the long-pending debt. What Sattaiah sowed 11 years back bore fruit to his family now. This not only put roses to their grief-stricken cheeks, but also made them proud of Sattaiah.

One thought on “After 11 Years, Indian-origin Siblings Travel from USA to Clear Their Debt to a Peanut Seller in India”