Durga Puja is one of the grandest and most-awaited Indian festivals in September 2017. It is a most spectacular celebration in the Indian state of Bengal. Though Durga Puja is celebrated wherever Indians are in the world, no other place can match the grandeur of the celebration that Bengal exhibits. However, the joy and happiness it brings is not restricted within borders of India. It is equally perceptible among Indians in New York and New Jersey Indians. Some of the Bengali associations have been celebrating Durga Puja in New Jersey and New York for years. We at Indian Eagle recommend the following best places for Durga Puja 2017 in New York and New Jersey. 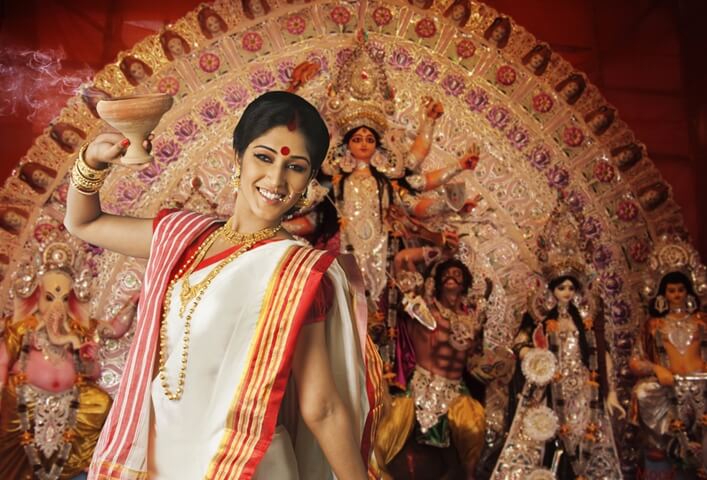 The New York Puja Association, a non-profit organization of Bengalis in New York, celebrates Durga Puja as traditionally as the celebration in India. They have been known for organizing one of the best Durga Puja events in USA since they got together in Queens, NYC in 1995. This New York Durga Puja 2017 is their 22nd celebration. They also celebrate Kali Puja and Saraswati Puja every year. Cultural entertainment is a hallmark of the New York Puja Association’s Durga Puja 2017 in USA.

Buffalo Durga Puja is one of the best New York Indian events in September 2017. Sanskriti, a Bengali cultural association in Buffalo, is at the helm of this New York Durga Puja 2017. Founded in 1974-75, Sanskriti strives to provide the current generation of Bengalis in New York with a cultural platform to have a tryst with their heritage. Sanskriti also organizes Saraswati Puja and Lakshmi Puja among others. The New York Buffalo Durga Puja begins and ends with engrossing cultural programs for all age groups.

The East Coast Durga Puja Association in Queens, New York is breathlessly waiting for Durga Puja 2017 in USA. Known for one of the few best New York Durga Puja events, this non-profit organization of New York Bengalis has got a great schedule of cultural programs including a live concert by Rupankar Bagchi, a National Award-winning singer from Kolkata, for three days of the celebration this year. Below are some more details of this Durga Puja 2017 in New York.

Utsov Inc. is a big name in the celebration of Dura Puja and other Indian festivals in New Jersey. Founded by a group of Indian professional sin New Jersey, Utsov Inc. is all set to celebrate Durga Puja 2017 in the grandest way possible. This New Jersey Durga Puja 2017 has several ‘wow’ factors including a fascinating lineup of cultural events and entertainment programs. While there are a drawing competition and a talent show for children, adults can display their conch blowing prowess at a conch shell blowing contest. Besides delectable Bengali food at Utsov Inc. Durga Puja, young Indian signers – Parul Mishra and Vishwajeet Borwankar – will make this Durga Puja 2017 in USA a melodious one.

One of the most famous Bengali associations in New Jersey, Kallol knows how to make Durga Puja a memorable celebration every year. The Kallol Durga Puja 2017 in New Jersey is one of the most-awaited Indian festivals in September for its agenda of multicultural programs including musical performances by eminent artists from India. Popular Indian singer Sona Mohapatra and National Award winner Iman Chakraborty will lend melodies to the celebration this year. Sandeep Bhattacharjee, Pratik Chowdhury and the Dohar Band from Kolkata will add to the entertainment quotient of this New jersey Durga Puja by Kallol.

Durga Puja at Ananda Mandir in New Jersey is a most traditional one. Hundreds of New Jersey Indians throng the shrine to immerse themselves in festive revelries for five days. New Jersey Ananda Mandir is one of the few Hindu temples in USA that follows the Bengali calendar precisely for celebrating Durga Puja and other festivals. Also an Indian cultural center, the temple was commissioned in 1995 and constructed in 2003.

This New Jersey Durga Puja by Garden State Cultural Association in Plainfield is in its 26th year. Known for traditional celebrations, this nonprofit organization of New Jersey Indian Bengalis leaves no stone unturned to make Durga Puja a grand get-together for delicious Bengali food and cultural entertainment. Two contemporary singers, Aneek Dhar and Anupam Roy will enthrall volunteers and visitors at this place for Durga Puja 2017 in USA.

Indians in and around Morris County, New Jersey, can look forward to the Indian Community Center of Garden State for Durga Puja 2017 in USA. This New Jersey Bengali community does not inch away from tradition when it comes to celebrating Durga Puja, Saraswati Puja, Lakshmi Puja or any other festival. No matter how many thousands of miles away from India, the Indian Community Center of Garden State makes sure that everyone feels like being home during Durga Puja in New Jersey.

Travel Beats is a leading Indian American community portal catering latest news and stories to Indians in USA. It publishes the latest visa, immigration and travel news alongside interesting and inspiring stories of Indian Americans. Subscribe to our free newsletter for upcoming news, stories and events in US cities.