No matter how familiar the beats of dhaak, the fragrance of shiuli flowers (Nyctanthes arbor–tristis), the taste of festive food, the ambience of festive evenings, the feeling of sacred flower offering, the significance of Sandhi Puja and the joy of sindur khela are to those living abroad, they strongly feel drawn to home this time of the year. They brave the odds to come home and go on a celebration spree in the neighborhoods where they have grown up. Undeniably, Durga Puja is not just an annual festival but a homecoming occasion for NRI Bengalis. Even many Bengalis in the Indian American community book last-minute flights to India due to their umbilical cord with the roots and an overwhelming urge to get together with the native relatives during the festival. 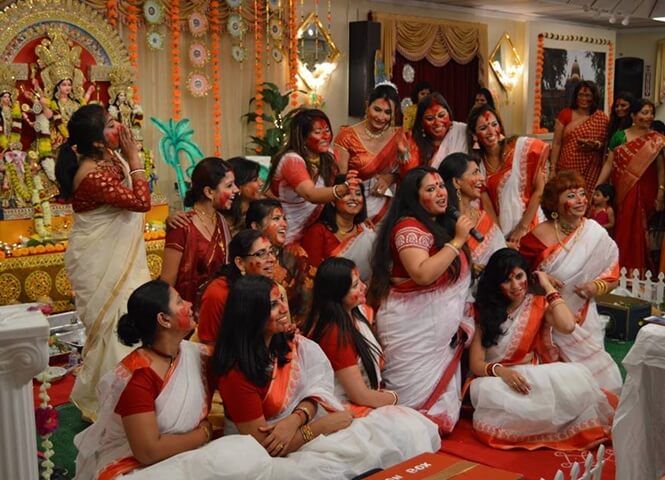 On the other hand, there are those who have never been away from home during Durga Puja. They wonder how Durga Puja is celebrated abroad, how culturally different the celebration is, how authentic the rituals are, how joyous the festivity is, if young NRI Bengalis flaunt traditional fashion, etc. A women-only group from the Indian community in the San Francisco Bay Area has the answer to all these. Ena Sarkar, the founder and CEO of WomenNow TV, a trend-setting South Asian talk show in the Bay Area, shares nitty-gritty of their women-only Durga Puja celebration in Santa Clara with us at Travel Beats, an Indian American community portal.

Initiated in 2015 by the WomenNow team, the Santa Clara Durga Utsav is no more a toddler in the second year. The women-only group is prepared with a better and greater plan for the celebration which has become one of the most awaited Indian events in the Bay Area. Ena Sarkar and her team of women from different walks of life pull all stops to make various arrangements for four days of the festival from buying the idol to shopping for puja-special things to organizing cultural functions to making culinary offerings for the Goddess to distributing Prasad to managing the gathering of visitors in the marquee. 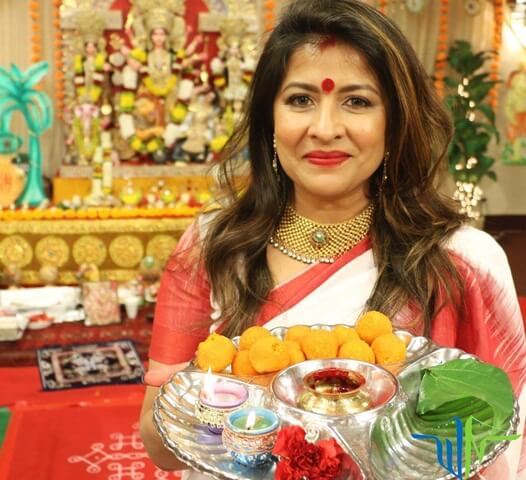 What made the WomenNow TV team come forward to organize Durga Puja in the San Francisco Bay Area was the idea of celebrating the collective power of ‘women now’ (today’s women) that they represent. It coincided with the tradition of invoking Goddess Durga or Shakti to bless her children with the power of good over evil. In addition, a cultural platform was needed for the Bay Area Indians to gather under one roof and interact with each other.

“The Santa Clara Durga Utsav is an interface between the divine purpose of this festival and the philosophy of WomenNow. We also wanted to provide a cultural platform for the Bay Area Indians to gather under one roof and interact with each other. Ours is not just a women-only celebration but a community get-together,” Ena Sarkar said.

WomenNow TV’s celebration of Durga Puja is an absolutely different picture of what appears a male-dominated activity in the patriarchal society of India. In aristocratic households from urban India to rural India, women prepare for the celebration and make arrangements for ceremonies on each day of the festivity behind the curtain, while menfolk gear up with their tasks and activities in the outer world. However, the scenario is changing for women among the urban aristocrats of Bengal. 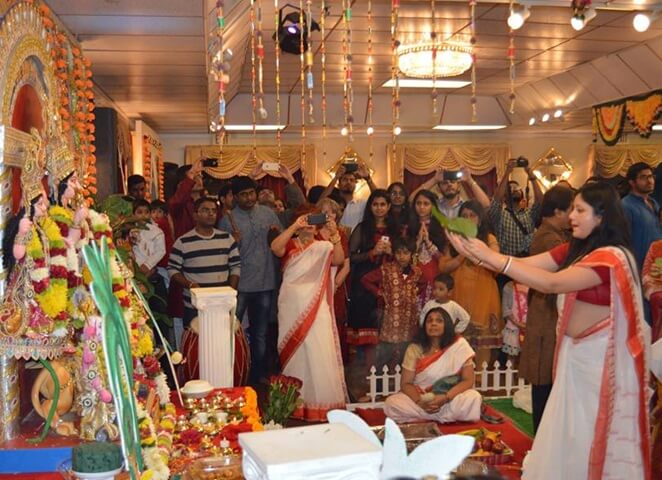 In contrast to it, WomenNow’s Santa Clara Durga Utsav is a women-only celebration in terms of preparation and arrangement. Needless to say, Durga Puja is a mammoth celebration which entails a lot of doing from fund collection to venue management to cultural performance to immersion of idols. However, the WomenNow team has proven that nothing is impossible for the collective power of women by overcoming all initial difficulties and challenges including selection of the venue. Since the celebration is not limited to worshiping but comprises feasting and cultural functions, they required a venue with ample space to accommodate a considerable crowd of visitors during certain rituals like dhunuchi dance.

The Santa Clara Durga Utsav in the Bay Area is no exception to such usual contrasts as India vs USA, East vs West, the Oriental vs the Occidental, and Indians vs Indian Americans which often come up in regular discussions, debates and conversations. Ena Sarkar unhesitatingly bared her mind regarding if there is any cultural difference between Durga Puja celebration in USA and that in India.

“Definitely, there is. You can never compare the way Bengal celebrates Durga Puja to anywhere else in the world. What a grand, fabulous, joyous, incredible celebration in Bengal! But we try to get as close to home as we can by dressing traditionally, having the traditional food and observing the age-old rituals during the festival no matter how many thousands of miles we are away from Kolkata. There is no dearth of enthusiasm about the celebration in the Bay Area Indian community.” 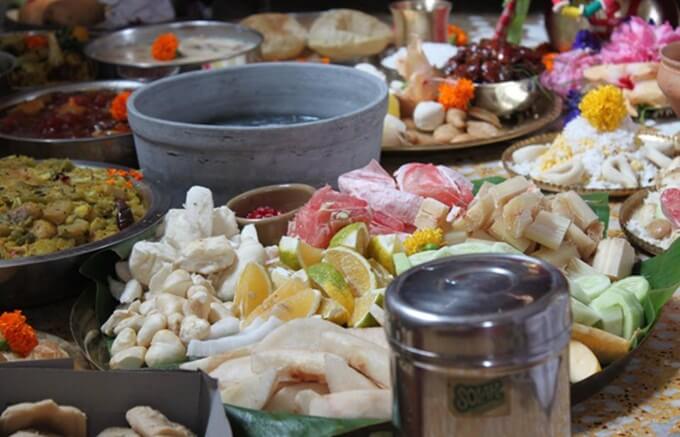 When Ena talked about the boundless enthusiasm of Bengalis in the Bay Area, we at Travel Beats felt curious to know if young Indian Americans who were born in USA feel the same about Durga Puja and connect with it the same way as India-born Bengalis or Bengalis from India do in America.

Ena Sarkar said in no uncertain terms, “It is somewhat difficult for young Indians in USA to feel connect with the festival as they have been growing up in a country where there are multiple cultures and religions existing side by side. They have not yet understood the value of surrender to a single divine power – the essence of Hinduism. However, children certainly visit the puja venue with their parents and enjoy the festivities. They may not groove to the beats of dhaak but they enjoy the festive music.”

On a closing note, Ena Sarkar acknowledged that the Santa Clara Durga Utsav would not have been a grand celebration in the Bay Area without her WomenNow team and that it has become popular with their American friends as well.

Travel Beats is a community portal for Indian Diaspora by Indian Eagle, a leading travel booking partner for Indians in USA. It publishes news and inspiring stories of the Indian community across borders. Share your story with us at share@IndianEagle.com and subscribe to our free newsletter for latest NRI, US visa, immigration and air travel news.