Chai, an incredibly versatile drink, is next to God in India. Like the Almighty, chai is omnipresent across the country, from a poor man’s hut to billionaire Mukesh Ambani’s Antilia, from a roadside stall to a Taj Hotel restaurant, from rural interiors to urban hangouts, from railway platforms to the height of 35000 feet, from Kanyakumari to Kashmir, and from a writer’s desk to an IT employee’s favorite pastime. Reportedly, India consumed over 1.1 billion kilograms of tea in 2021 alone.

Ek cup cha (a cup of tea) is the elixir of life, especially in Kolkata. Serving tea with a couple of Britannia biscuits to guests in households is unique to the culture of Kolkata. Discussing and debating the current state of affairs, from politics to economy, while sipping garam cha (hot tea) at a tea stall is a morning ritual in the City of Joy. Tea is a must-have stimulant accompanying a big bowl of jhalmuri with tele bhaja (fritters) at any adda, a get-together of friends or family members, in the City of Rabindranath Tagore. 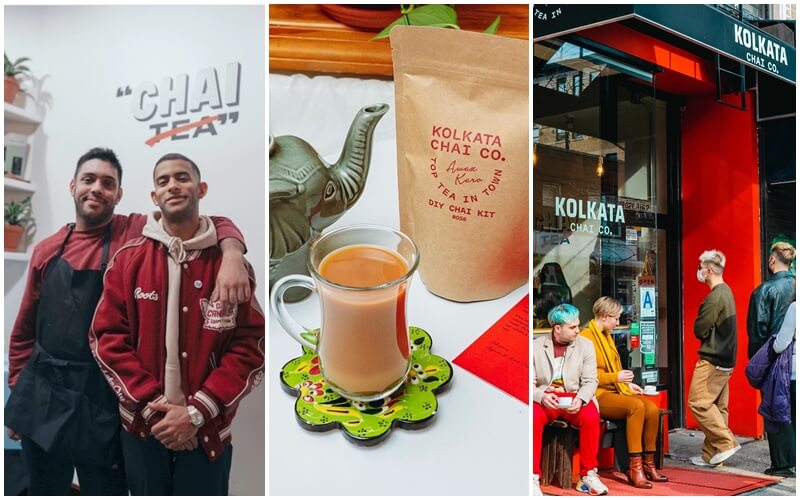 Having grown discontented with the westernized versions of tea in the USA, Ani and Ayan Sanyal – an Indian American sibling duo – have been brewing desi chai for thousands of Indians in and outside New York since 2018. Chai is one of the few things that have filled in the void between their life in America and the life they lived in India during their vacations. Ayan and Ani Sanyal in their thirties, established Kolkata Chai Co, an authentic Indian tea brand in New York, out of their love for Kolkata, respect for the native tradition, cravings for cha and, most importantly, nostalgia.

The genesis of the Sanyal brothers’ Kolkata Chai Co began with their trips to India. Right from the booking of flight tickets to Kolkata from USA for vacations, their tastebuds would long for the flavor of roadside tea stalls and street food that the City of Joy is known for. Their excitement would culminate in a visit to their parents’ favorite tea stalls during every trip to Kolkata. The visit is as holy as that to College Street, Coffee House, Nandan, and the Victoria Memorial for art and culture buffs. Hardly does any American tea brand have the flavor and aroma of chai brewed by even traditional stalls in Kolkata’s lanes and alleys.

After their return from one such enlightening trip to the City of Joy in 2017, Ani and Anil started brewing their thoughts and cooking up business plans to make their dream of making America sip authentic desi chai come true. An overwhelming response to the pilot testing of desi chai in farmers markets and culinary workshops gave them green signal to launch Kolkata Chai Co in 2019. Today, Kolkata Chai Café is a landmark on the lower side of Manhattan and a must stop for Indian tea lovers.

Just when the business started toddling, the pandemic shut the café down. Inarguably, opening a business is a capital-intensive process in a city like New York. On top of that, the pandemic made it a lot more difficult to make the business stand as public life came to a standstill in the Big Apple (rather across the globe). They started delivering chai door to door across the city in between two waves of the pandemic. They also came up with Chai Mix and began to ship it across the country. Chai Mix, a signature packaged product with different flavors including the one made with “organic Assam tea leaves and premium spices”, sells like hot cakes.

“Tea being the mainstay of Kolkata Chai Café, the menu has Masala Chai, Kesar Chai, Ginger Chai, Iced Chai, Oatmilk Chai, Filter Coffee, Cardamom Coffee, and Assam Milk Chai. Masala Limca, Turmeric Latte (haldi doodh), and Almond Milk are among the seasonal specials on the menu. Be it the Sanyal brothers’ café in NYC or a humble tea stall in India, chai and samosa make a perfect Indian couple. Therefore, the menu features samosa with mint and tamarind chutney. With egg rolls on the menu, the sibling duo brought a slice of Kolkata’s street food culture to New York. Egg rolls dominate the mood of evening outings in Bengal. However, I am surprised to see jhal muri missing from the menu of Kolkata Chai Café in New York,” said Sourav Agarwal, the Editor of Travel Beats, a leading community portal for Indians in America.

Kolkata Chai Café in New York City is one of the best hangouts for Indians living in or visiting the United States. This exclusive story is part of the new series – Life in America – by Indian Eagle that hundreds of thousands of Indians in USA have chosen as their reliable travel-booking partner. Subscribe to Travel Beats, a subsidiary of Indian Eagle, for community stories, US-India travel news, visa and immigration updates.