There is something about Mary! This is the chant that is heard across India, since M C Mary Kom last stormed in to the Olympic semi-finals, after defeating her Tunisian opponent, Maroua Rahali 15-6 in the quarter-finals at the ExCeL South Arena 2. 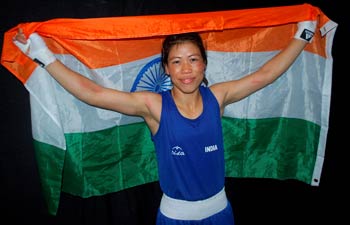 “Magnificent” “Dynamic” “Magical” superlatives are exhausted as the pint-sized Boxer has suddenly shifted the limelight on to the lesser discussed sport of Boxing. Fans have taken to Twitter and Goggling trivia about the sport, thanks to Mary and her determined spirit.

The First women boxer from India, Mary has won Five World Titles, consecutively. With more than three Asian titles and eleven National titles under her belt, she is also a recipient of the Arjuna Award, the Padma Shri Award, the Rajiv Gandhi Khel Ratna Award and a special award from the AIBA. This Boxing Champion from Manipur is the only pugilist to win a medal in each one of the six Championships.

Her illustrious career has come at a price. Mother of twin sons, Mary Kom has the support of her husband and family. In the present day when women are placing their career on hold, Mary Kom has paved the way for women to make the most of their talents. Balancing both career and family, her quarter-finals win was a gift to her twins on their fifth birthday.

Post her win, Mary expressed her happiness at how her sacrifice and hard work has paid off.

” The Olympics are very special. Every athlete works to play at the Olympic Games. This is my 12th year of fighting and I came back out of retirement and changed my weight because I had to take part in the Olympic Games. For the last four years I have been training with men taller and heavier than me. This has helped me a lot.”

Mary will face Great Britain’s Nicola Adams in the last-four phase bout for a place in the finals. Win or lose, India is assured of another medal as losers of both semi-finals will be awarded bronze medals.Mary Kom has proved herself worthy of her title  ‘Magnificent Mary’  while becoming the Ambassador for Women’s Boxing in 2009.