A first-generation Indian American in Los Angeles, Anisha Adusumilli is an actor, filmmaker and storyteller. An artist from a young age, Anisha is a known face in American film and television. Being a creative expressionist in singing and dancing, she chose a lesser-trodden path to carve a niche for herself. On completion of her business and theatre studies at the University of California, she took up acting and tasted success in it. Anisha’s journey from acting in Fox’s New Girl, CBS’ How I Met Your Mother, NCIS: Los Angeles, and NBC’s Heartbeat has hit a new track with her directorial debut, First Date, a short film.

IndianEagle catches up with Los Angeles-based actor and filmmaker Anisha Adusumilli to share with you her views of the first-generation Indians in America, her work experience with Americans, her memories of trips to India, women-related issues, socio-cultural differences, etc. in the following interview at Travel Beats, a thriving Indian American community portal.

IE: First Date is your first directorial venture. As the title suggests, the short film is about dating. Please throw some light on the story and what inspired you to work on it.

Anisha: It’s really a story about two people who begin dating knowing that they are already locked into get married. So there’s a certain freedom built in to the situation in that they can each truly be themselves from the get go instead of having to put their best foot forward and hope that someone will stick around as often happens in the modern dating world. It was inspired by my mother after she had put me on some Indian matrimony sites without my knowledge. And I kind of ran with the idea of a female character that had a closeted side of her personality that could only be exposed to the person who is meant to be her husband.

IE: Your directorial debut screened at Broad Humor Film Festival and Portland Film Festival this year. What was the public response?

Anisha: I think it’s misleading from the beginning. People don’t really know what to expect when it first starts, it seems like a nice evening between two mild-mannered individuals and then there’s an unexpected twist that happens pretty early on. So I think people are kind of shocked and then they start laughing and then it just becomes an enjoyable ride. Most people have been super kind and complimentary. And some can relate to the experience. I love it when I hear that. And then some just think it’s a little weird … like my mom!

IE: There are many dating apps and websites these days. Do any of them really help eligible bachelors with their quest for right life mates in the virtual world? (What do you think?)

Anisha: Definitely. It’s another way to guys/girls to meet people they might not ordinarily connect with. I think the key is to move beyond the virtual space and meet the real 3-D person. That’s the trap I’d say for a lot of the matches parents want to arrange for their kids…Potential partners seem so great on paper but getting along in person is a whole different story.  All parties have to keep their expectations realistic until some quality in-person time happens.

IE: Would you like to brief us on how the first-generation Indian Americans date in USA?

Anisha: It’s a mixed bag I would say. There’s the typical American culture way of dating – meeting through shared environments, mutual friends, or online dating. And then I think there’s the Indian side that some may be open to like conferences or parent introductions or other Indian networking events that people go to with a bit of the “I am keeping my eyes open for my future wife/husband mentality” that is drilled into us (mainly by our relatives).  At the end of the day most first generation Indians I know are actually very open-minded and understand our cultural expectations and looming deadlines that hang over our heads, but also know that finding a partner will happen when it’s meant to and how it’s meant to.

IE: Have you ever been to India? Would you like to share with us what you found the best or liked the most there? I mean what sticks to your mind even after return to USA. Something memorable about India…

Anisha: Yes I grew up going to India throughout my life – either for family weddings or various vacations. One of my favorite trips was when my family and I toured through Kerala. I loved seeing Munnar and the gorgeous landscapes there. Seeing the tea tree workers on the roadsides was really special. They were so sweet and friendly. That place is truly heaven on earth. It’s fun to get connected to my history; it awakens a huge curiosity and connected feeling within me.

IE: What cultural differences do you find between India and the Indians in USA?

Anisha: There’s a different sense of community I feel when I’m in India. Neighbors are like family or your neighbors literally are your family. They look out for each other more.  I actively try to create community here in Los Angeles with Indians in the business. It’s not automatic but it doesn’t exist automatically.

IE: What challenges or difficulties did you face while wearing the hat of a filmmaker for the first time?

Anisha: Organizing all of the logistic details for my shoot seemed overwhelming before the actual day. Locations, hiring people, being camera-ready, etc. is a lot to manage but it’s doable. And I’ve learned that if you have great, competent people around it will all work out.  The challenges and hiccups are all a necessary part of the filmmaking process – makes for good laughs after it’s all said and done!

IE: You have acted in short films, theater plays and a few American TV series. What is more challenging and exciting to you: acting or filmmaking? I mean what gives you more goosebumps.

Anisha: I love all of it. Every part I get is thrilling for me and helps me grow. I truly love filmmaking though.  It empowers me even more than when I am only acting. It’s my words, my vision, my blood, sweat and tears that has transformed into a finished product. It’s super rewarding and humbling because it takes a village. I would never be able to do it alone.  That collaboration gives me the goosebumps.

IE: Do you think that you are privileged being a first-generation Indian American?

Anisha: Absolutely. I honestly don’t know that I would have been able to devote myself 100% to a creative profession if I was raised in India. I probably would have followed in my parents footsteps and become a Doctor or maybe a teacher just because the profession doesn’t seem as accessible there. I’m so lucky for the opportunity and accessibility I have being a first-generation Indian American. It’s a really exciting time for us here and there’s a whole movement of stories being told all about it right now. And the best part is that we don’t have to wait for anyone to give us the opportunity – we can create everything ourselves and reach so many people through all of the different online media platforms nowadays.  I’m so happy to be a part of that.

IE: Have you ever experienced ‘culture shock’ while working with American actors and filmmakers? Or, your socio-cultural differences with them (if there is any) are natural to you since you were born and brought up in America?

Anisha: No, I feel I am able to easily adapt to any cast and crew.  Cultural differences have never been a barrier; it usually just comes down to people’s overall attitudes. It is essential that people are positive and patient on sets. So much goes wrong, that you have to remain a team during the process. It gets hard when someone has a sour attitude – that’s the only shock I tend to experience on set. It’s supposed to be fun!

IE: Would you ever be interested to work in Bollywood, either as an actor or filmmaker or scriptwriter?

Anisha: Yes I would love to do all of those things! The more creative experiences I can have, the better!  I’ve also got to perform a big Bollywood musical number at least once in my life!

IE: Which Indian actors would you like to work with, if you ever make a film in India or a core India-related subject?

Anisha: I honestly don’t have a specific actor in mind. I would love to work with any talented actor who is super passionate about acting and loves the collaborative storytelling process. That’s it. Magic will happen if that spirit is present within an actor. 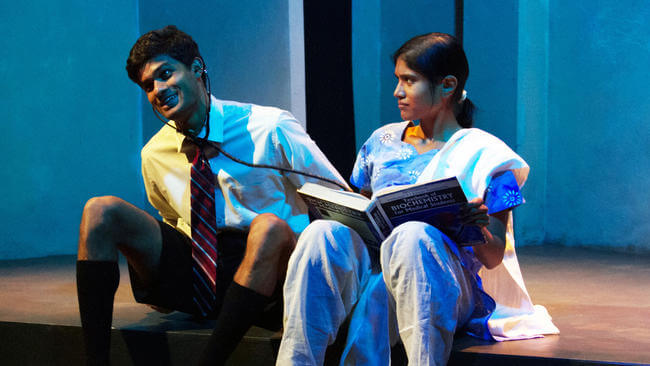 IE: There are many women-related issues in India and other developing countries. Do you play with the idea of making a film on gender violence, women empowerment or girls’ education for mass awareness?

Anisha: Yes. I have already been involved with a couple projects dealing with women-related issues. I acted in a PSA for SAHARA – a South Asian helpline and referral agency for abused women in Southern California and also narrated a documentary called ‘Mission Save Her – The Sandya’s Story – Project Save Her’ which brings awareness to human trafficking in India.  I personally would love to begin creating some sort of scholarship opportunities or program for young girls in India who are interested in exploring creative professions more in depth and provide some real-world training and mentorship opportunities for them.

Anisha: I appreciate all of them. They have paved the way and knocked down lots of doors for us following in their footsteps and creating our own paths. I have a special love for Mira Nair as her movies were the first Indian ones I saw when I was a little girl.  I also love all of the Indian females who are breaking through in Hollywood. I’m so happy for them and proud of them. They’ve been great role models and have represented us well, but there’s always room for more. I hope to be right beside them one day soon.

Travel Beats is a digital publication by IndianEagle, a leading travel partner of Indians in USA. IndianEagle connects with Indian Americans through NRI news, editorial features and interviews on Travel Beats. As part of its CSR activity, IndianEagle publishes stories of philanthropists, social activists and young Indians to promote their contributions towards community development, social progress and Humanity.