On April 3, 2022, Indian American Falguni Shah created history. Her first ‘Grammy’ win is not just hers, but also that of the young vocalists who sang for the album A Colorful World. Most of us did not notice that Indian-origin Ayan Shah, the youngest of all the children singers, walked the red carpet and shared the stage with the lead vocalist Falguni Shah. Ayan’s suited gentleman-like presence on the stage for the Grammy Awards 2022 eluded the international media spotlight, perhaps because he was shying away from the camera during the live telecast in Las Vegas. 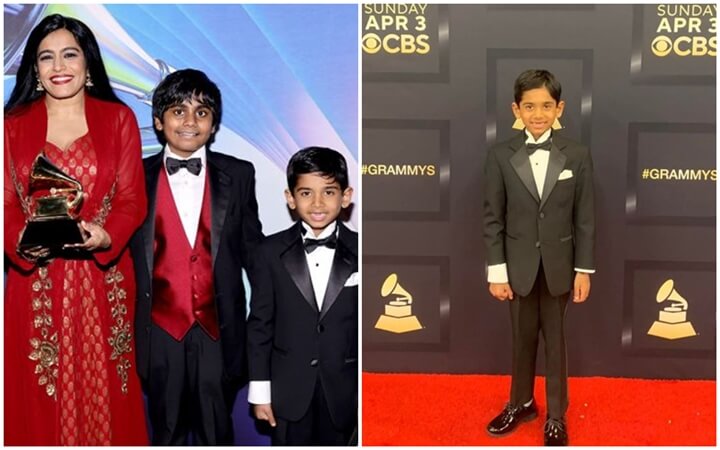 6-year-old Ayan Shah, a resident of New Jersey, is no music prodigy. Teaming up with Falguni who earned the Grammy nomination twice; singing for her album that advocates racial harmony; sharing the most coveted award with her made him extraordinary. He has sung three songs for the album. Being a budding vocalist at the 64th Grammy Awards is a steppingstone for the 6-year-old to a bright future. He will be cherishing his debut in the world of music while growing up and forever. His kindergarten teachers organized a celebration for him and felicitated him.

It has just been a year since he started taking formal music lessons in Weehawken, NJ. Born with an ear to music, he hums Disney’s songs and feels tuned to the Beatles classics. Playing the piano is one of his favorite pastimes. Ayan’s opportunity to be a vocalist on Falguni Shah’s A Colorful World that celebrates unity in ethnic diversity came through a relative. This is his first-ever brush with stardom though he has given small performances here and there. Most recently, the School of Rock roped in him for a performance in Hoboken.

Some of us might be wondering what sharing a Grammy means to the 6-year-old. It was a whole different world being there, very different than we were used to,” said Shah. “It was his first foray into anything remotely similar to this kind of show. I don’t think he quite grasped the concept of what a Grammy was, he’s too young to have been watching, but he understood that it was an award given out for the album he was a part of. He was very excited throughout the weekend. I think the biggest thing now is that he is more motivated than ever to continue doing music and singing,” said Ayan’s father who had accompanied him to the gala night on April 3.

More good news is yet to come Ayan’s way. Indian American Ayan Shah may be the youngest person to receive a Grammy award by the Academy in the history of music. The Grammy Awards committee has not yet made an official statement. Travel Beats, a community portal for Indians in the US by Indian Eagle Travel, wishes him many more awards in music in the days to come.