The US midterm elections 2022 results include two historic wins for the Indian American community that represents itself in the corridor of power and politics. Aruna Miller and Shri Thanedar scripted history, with an overwhelming support to their campaigns and a landslide victory in the 2022 midterms. Aruna has a history of undertaking several welfare initiatives for the people of Maryland, whereas the Black community of Michigan voted Shri Thanedar to the US House of Representatives as their voice. 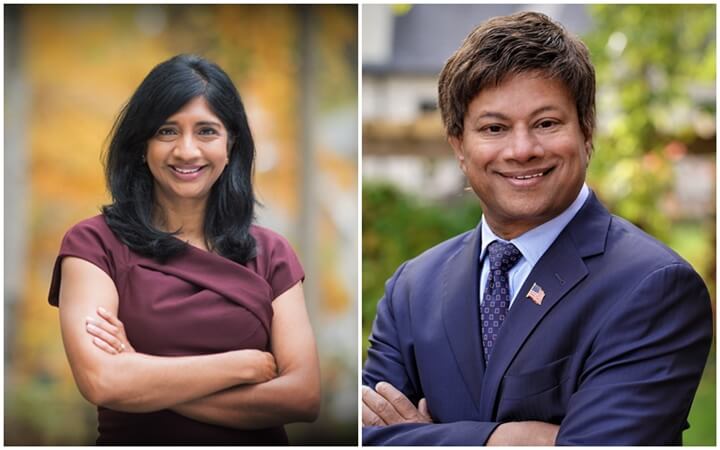 One of the historic wins in the US midterm polls 2022 belongs to Aruna Miller who is the first South Asian and the first Indian American to be elected as Lieutenant Governor of Maryland. The 57-year-old Democrat, a civil engineer by profession, was born in Hyderabad, India. Her parents immigrated to New York from the undivided Andhra Pradesh in 1972 when she was only 7. Her father was a mechanical engineer at IBM. Aruna majored in civil engineering at the Missouri University of Science and Technology.

Maryland’s new lieutenant governor Aruna Miller is now the running mate of Maryland’s first Black governor, Wes Moore. Naturalized as a US citizen in 2000, she was elected to the Maryland House of Delegates in 2010, and she represented the 15th District in Montgomery County for eight years. During her tenure in the House of Delegates, she espoused several causes, such as family welfare, domestic violence check, marriage equality, gun purchase control, and renewable energy in the state. She was also vocal about the need to increase minimum wages.

While in the Maryland House of Delegates, she went on to exclude underage smokers from the users of e-cigarettes, implement GPS tracking of domestic abusers, and establish a fund for rape crisis centers in the state. In 2018, she backed the need of studying and promoting alternative treatments to help Americans tide over the ‘opioid’ crisis. She also brought a bill pushing high schools to introduce computer science in their curriculum for earlier grades. She had offered her service as a transportation engineer to local governments in California and Virginia before she relocated to Maryland in 1990.

After the US midterm results were announced, Indian American Aruna Miller tweeted, “Maryland, you showed the nation what a small but mighty state do when democracy is on the ballot. You chose unity over division, expanding rights over restricting rights, and hope over fear. Ever since I came to this country, I have never stopped being excited for the promise of America. I will never stop fighting to make sure that promise is available to everyone.”

Shri Thanedar joins other Indian Americans in House of Representatives

The US midterm elections 2022 catapulted Indian American Shri Thanedar to the House of Representatives from the 13th Congressional district of Michigan. With a majority of votes from Detroit, he kissed a landslide victory in the midterm elections this year – which, in turn, enables him to join four other Indian American Representatives: Raja Krishnamoorthi from Illinois, Pramila Jayapal from Washington, Ro Khanna and Ami Bera of California.

Shri Thanedar’s journey from Karnataka where grew up in abject poverty to the US where he became a millionaire, is a rags-to-riches story. Born and brought up in a low-income family, he worked menial jobs to make ends meet for a family of eight members when he was 14. His story of hardships and humble beginnings resonated with the Black community that accounts for nearly 78% of Detroit’s racial fabric. In his victory speech, he promised to work hard for the welfare of his Black supporters and voice their concerns in the US Congress. “I will serve the people of Michigan’s 13th district to the best of my abilities,” he said.

As a meritorious student, Thanedar graduated with a bachelor’s degree in chemistry only at 18. On completion of his post-graduation at the University of Bombay, he joined the University of Akron, Ohio for a PhD in chemistry, and that made him travel to the United States in 1979. His experience as a researcher at Petrolite Corp, coupled with a PhD degree in chemistry, turned a key to dig gold in the chemical business. He learned the nitty-gritty of the chemical business by working a graveyard shift for $15/hour at Chemir, which he bought for $75,000 in 1991.

“By 2005, his maiden business – Chemir – employed 40 PhD chemists among 160 employees and registered a revenue of $16 million. He sold the company for $26 million to rise over the bankruptcy triggered by a colossal loss that his other businesses incurred during the Great Recession in the USA. His active participation in the 2018 elections for the Governor of Michigan became a launchpad for his political career. He funded his state-wide campaign with $10 million from his own savings and earned the media spotlight, but his donation to a Republican campaign pushed him back in the race for the Office of Michigan Governor,” said Sourav Agarwal, the Editor of Travel Beats.