The US Independence Day on July 4 is a celebration for the Indian American Community too. The ceremonious hoisting of the American flag will be followed by felicitation of two Indian Americans as Great Immigrants of the Year 2017 in USA. They are former US Surgeon General Vivek Murthy and Adobe Chief Shantanu Narayen among the 38 immigrants selected for the Pride of America Award.

Institutionalized in 2006, the Pride of America Award recognizes great immigrants in USA for their remarkable contributions to the socio-economic progress of the country. Among the Great Immigrants of 2016 were four Indian Americans, including Google CEO Sundar Pichai; California University’s Professor of English, Bharati Mukherjee; PBS Newshour’s senior journalist Hari Sreenivasan, and Vikram Malhotra, Chairman of the Americas at McKinsey. 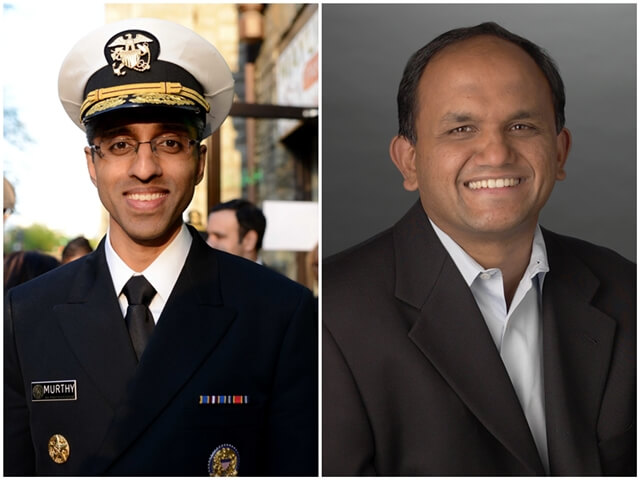 Among the 2017 Great Immigrants and the Pride of America Award winners, Shantanu Narayen is the Indian American CEO of Adobe Systems from Hyderabad, India. Born in Mumbai and brought up in Hyderabad, Shantanu Narayen was one of the few CEOs who Indian PM Narendra Modi had a roundtable with during his recent visit to President Donald Trump in Washington DC. He was appointed a member of former President Barack Obama’s Management Advisory Board in 2011.

He did graduation in electronics engineering at Osmania University Hyderabad, studied MBA at the University of California Berkeley, and earned a MS degree in computer science from Ohio’s Bowling Green State University. Adobe Systems’ CEO Shantanu Narayen, who started his career at Apple, gets an annual salary of $875,000 currently.

Former US Surgeon General Vivek Murthy is another Indian American among the 2017 Great Immigrants and the Pride of America Award winners. Born to a migrant couple from Karnataka and brought up in Miami, Florida, Dr. Vivek Murthy is the founder and president of Doctors for Obama or Doctors for America. A Harvard University graduate from Boston and a Doctor of Medicine from Yale School of Medicine, Dr. Murthy is the youngest surgeon general in the history of USA.

It was Dr. Vivek Murthy who united all American doctors to save the United States from a critical health crisis resulting from overdose of painkillers. He runs several educational programs and health campaigns in the Indian state of Karnataka where his parents belong to. He also co-founded Swasthya Community Health Partnership in 1997, aiming to help rural Indian women become health care providers at the basic level.

The 2017 Great Immigrants and Pride of America Award winners represent more than 30 counties of origin. They contribute to the progress of America in such niches as education, economy and international peace in their individual ways. The 38 Great Immigrants of 2017, including the above-mentioned Indian Americans, will be honored with a full-page public service announcement in The New York Times and an online public awareness program.

When Dr. Vivek Murthy and Adobe CEO Shantanu Narayen will be felicitated along with other winners of USA’s Great Immigrants Award 2017 tomorrow, Ravinder Bansal from New York will embark on a solo flight across 18 countries and 34 airports to raise $750,000 for a cancer hospital in his hometown in India.