More power to young Indians for making waves from Google Headquarters in the Silicon Valley to the White House! Three Indian American kids won the White House Recipe Contest in July 2016. The US First Lady Michelle Obama felicitated two Indian American teens as National Student Poets of the year 2016 at the White House on September 8. Now six Indian students including 2 from India and 4 from USA are stepping towards the finals of the 2016 Google Science Fair to compete for a whopping scholarship worth $50,000.

Anika Cheerla from California, Nikhil Gopal from New Jersey, Anushka Naiknaware from Oregon, and Nishita Belur from California are four Indian American teens among the 16 finalists of the sixth annual Google Science Fair competition which will be held on September 27 at Google Headquarters. 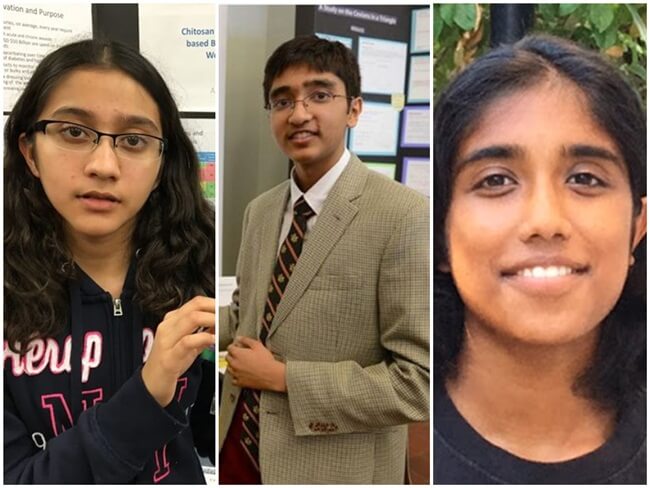 13-year-old Anushka Naiknaware from the Portland Indian community in Oregon is a student of chemistry. She has developed a cost-effective, biocompatible wound dressing material with moisture level monitoring sensor. Her invention helps to monitor healing of wounds without removing the dressing. Inspired by Marie Curie, Anushka Naiknaware had been at work to find a solution to chronic and complex wound care in the United States where about 165 million injuries are reported a year.

Anika Cheerla, a 14-year-old high school student from the Indian community in California, has devised an automated tool to predict probability of breast cancer development in individuals based on accurate screening of mammograms. She has developed curriculum for the ‘Coding for Kids’ workshop at the non-profit MathandCoding School where she teaches programming to kids. Anika Cheerla wants to be a professor since she is fond of teaching and research.

Nikhil Gopal, a 15-year-old student from the community of New Jersey Indians, has invented a portable malaria monitoring system to check the level of malaria parasite in the blood and decide on required amounts of medications based on the analysis from time to time. When his aunt succumbed to malaria in rural India due to no method or system of checking efficacy of the medicines given to her, Nikhil Gopal decided to create an inexpensive solution for people suffering from malaria, irrespective of socio-economic backgrounds.

13-year-old Nishita Belur from the community of San Jose Indians in California is among the 2016 Google Science Fair finalists for her project on laser light reflection. Nishita, a 7th grader, has invented a tool that uses laser light reflection to assess the quality of metal surfaces and detect defects in the same in the automobile industry. Nishita hopes that her automated scanning system will improve car production quality and reduce car production costs by accurately detecting defects in metal sheets at the very beginning.

The finalists of the Google Science Fair 2016 also includes two Indian students – one from Hyderabad and the other from Bengaluru – for their innovative solutions to improve human lives.

The winner will be announced and awarded the $50K scholarship in the grand finale to be held on September 27 in the Silicon Valley.

Travel Beats is a digital news portal for Indian Diaspora by IndianEagle, a leading travel organization for Indians in USA. Subscribe to Travel Beats’ free newsletter for latest news, exclusive stories and upcoming events in America.