The number of inspiring stories about trips to India from USA is not negligible. Trips to India have been epiphanies motivating the few Indian American youngsters to do something worthwhile for the community welfare. 12-year-old Indian American Naisha Bellam’s trips to Hyderabad exposed the grim picture of rural schools in her father’s hometown and motivated her to set up mini libraries for needy students’ seamless access to quality books at those schools.

Another remarkable story about trips to India from USA is that of four Indian American high school students from California, who have founded a biotech company, ReAlign Therapeutics in order to combat allergies. Arjun Gutta, Vasco Singh, Sam Kadaba and Akhil Gutta are the founding fathers of ReAlign Therapeutics in Newbury Park, Ventura County, CA. They shot to fame with the online sale of their first product, a probiotic supplement for fighting allergies.

Designed to make the body repel harmful bacteria and boost the immune system to treat allergies, the product is the first steppingstone for the four Indian American high school students to achieve something bigger and greater. 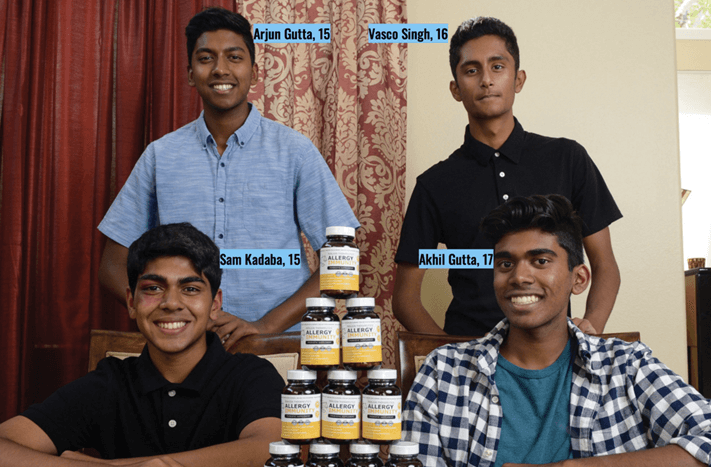 In addition to long hours of research and development behind the inception of ReAlign Therapeutics, lots of motivation has gone into the making of the first solution to combating allergies. Interestingly, the source of motivation was a trip to India. Vasco Singh, one of the cofounders was down with stomach flu on return from a family trip to India. Eventually, it made him prone to suffer from several allergies. When Vasco Singh did not respond to treatment with antibiotics, he was given probiotics which proved effective on him.

Indian American Vasco Singh’s successful treatment with probiotics for allergies urged him to explore the science behind it. Thus, ReAlign Therapeutics came into being in collaboration with his fellow school mates and childhood friends. But, their entrepreneurial journey encountered many hiccups initially. Being no legal adults, they were not allowed to own and run a business, particularly in the medical health segment. They are not legally old enough to apply for trademarks or have business credit cards.

“We are at work behind the curtain, but we run the business through adult professionals (middlemen). There are several other age-related limitations when it comes to running a business in the United States. ReAlign Therapeutics is not just a business but an awareness campaign on benefits of probiotics,” said Vasco Singh from California.

The current facts and figures of allergies in the United States are sufficient to make you understand the importance of probiotics. More than 50 million people in America suffer from various allergies every year. It is the sixth major cause of chronic illness in the USA, according to the American College of Allergy, Asthma and Immunology. Chronic illness from allergies costs a whopping $18 billion annually to Americans. About 15 million Americans tend to suffer from food allergies. Nearly 30% of children in America are allergic to certain food.

Disclaimer: This article by Indian Eagle Travel for the readers and subscribers of Travel Beats neither intends to promote nor seeks to endorse ReAlign Therapeutics and its products directly or indirectly. The article is just a part of our continued series of Indian American community stories.