The United States shortlisted 10 young scientists, including five Indian American students for Discovery Education Network’s Young Scientist Challenge 2016. Young Indians in USA have been riding the waves of innovation and invention contributing to the progress of society from different perspectives.

These five Indian American finalists are gearing up for the grand finale of 3M Young Scientist Challenge in St. Paul, Minnesota, while 13-year-old Anushka Naiknaware from Portland became a Google Science Fair winner yesterday for her cost-effective, biocompatible dressing material for chronic wounds. 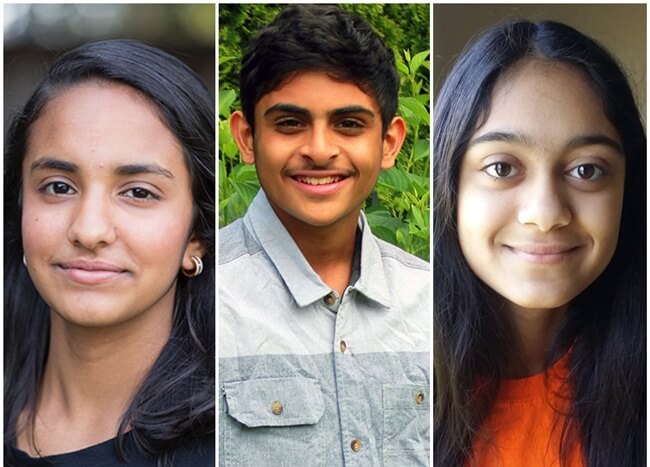 Meghna Behari from Pennsylvania, Rohit Mital from Rochester Hills in Michigan, Rohan Wagh from Portland in Oregon, Mrinali Kesavadas from Illinois and Sara Makboul from Georgia are potential young scientists of America among the finalists. They will compete for the prestigious title “America’s Top Young Scientist.”

Among the finalists of 3M Young Scientist Challenge 2016, Pennsylvania-based Meghna Behari has created an innovative device to make it easy to reach waterways which are difficult to access. The device will also help to analyze the level of difficulty in accessing waterways by monitoring temperature and pH levels of waters. She is sanguine about the usefulness of her invention for scientists.

14-year-old Rohan Wagh from Portland will compete in the grand finale of 3M Young Scientist Challenge 2016 for his invention to eliminate deficiency of energy in underdeveloped countries. This student of grade 8 from the Portland Indian community in Oregon believes that his invention can increase the efficiency of microbial fuel cells. The device is compact in size and requires low maintenance.

14-year-old Mrinali Kesavadas from Illinois has built a cost-effective cardiopulmonary resuscitation (CPR) simulator to save lives of the poor in underdeveloped countries. Made with low-cost materials, the simulator can give instant feedback through a computer-based program so that the accuracy of CPR tests can be checked. This device by the 8th grader is portable too.

8th grader Sara Makboul’s invention of Nano Cellulose Beads to improve the quality of water is her entry to the grand finale of 3M Young Scientist Challenge 2016. The 14-year-old Indian American girl from Georgia created Nano Cellulose Beads using absorbent cellulose from leaf remains. If combined with sodium polyacrylate and dispersed on land, the beads can absorb excess storm water to decrease the level of pollution.

13-year-old Rohit Mital entered the grand finale for his device to curb pollution caused by emission from diesel automobiles. The device will not only optimize filters to reduce the quantity of hazardous solid and liquid particles in the air but also save 250 million gallons of fuel per year. This 8th grader from the Indian community in Michigan aims to save people from life-taking diseases caused by air pollution.

The 10 finalists will present their innovations to a panel of judges including noted scientists and explain how their inventions can solve everyday problems in the grand finale of 3M Young Scientist Challenge 2016 in St. Paul, Minnesota. The event will be held on October 16, 17 and 18. They will also compete in a number of scientific challenges during the event which will be held on October 16, 17 and 18. The winner will be awarded the title “America’s Top Young Scientist” and a scholarship worth $25,000.