About one-third of the food produced globally is wasted every year. Airlines contribute a significant percentage of food waste the world over. Air travelers generated 5.2 million tons of waste including inflight food waste in 2016 alone, according to the International Air Transport Association (IATA). The airline cabin waste footprint is expected to increase manifold in the coming years if airlines don’t reduce or recycle it effectively. Some international airlines including JetBlue, Cathay Pacific, Qantas Airways and Delta Air Lines have undertaken measures to reduce and recycle inflight food waste. 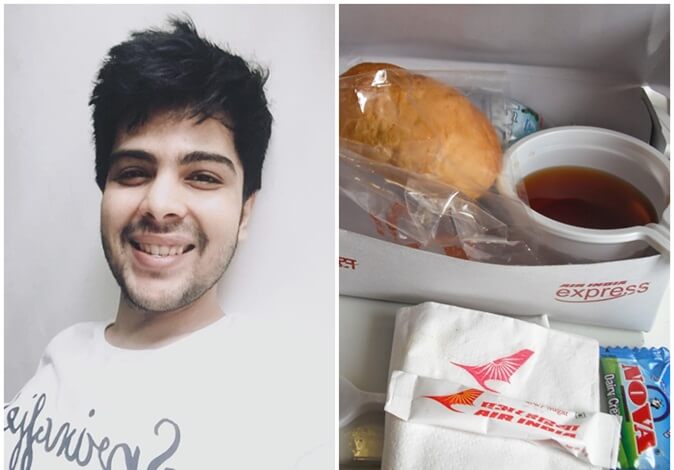 Food waste worth over INR 50,000 crore is generated in India every year. Though many nonprofit organizations and real-life hunger fighters have come forward to channelize food waste from restaurants, hotels and public events to the needy, the airline food waste generated on flights within India has not yet been brought into the ambit of humanitarian aides.

However, Mumbai-based Vishab Mehta seems the first human of India to have used airline food waste for a better cause. A frequent flyer, Vishab wondered “What happens to leftover airline food?” on seeing the quantity of unconsumed food on flights. He was shocked to discover that uneaten or leftover inflight meals are thrown away in the garbage. He not only brought into public notice the airline food waste but also decided to collect it for the hungry poor.

One of the humans of Mumbai, Vishab Mehta chose to mitigate the pangs of hunger for the needy during one of his flights in June 2018. Air India, one of the full-service airlines in India, serves meals to passengers on all flights. When Vishab was traveling by Air India from Mumbai to Jaipur in June, he decided not to let unconsumed and leftover food be wasted or dumped into a bin.

As soon as food was served to all on the Air India flight, Vishab approached the flight attendants with a request to help him collect uneaten or leftover food. The inflight crew responded to him warmly and suggested him to let them do that. They collected the unconsumed food from the trays and put it into a bag, at the behest of Vishab. There were almost 70 burger buns, 30 chocolates and 50 butter packets in the bag.

The leftover food that Vishab Mehta collected on the Air India flight was distributed among the needy children and adults who find it quite difficult to afford a single meal a day. He requested everyone to ‘save food and feed the hungry.’ What Vishab did is not only inspiring but also a feasible airline food waste solution.

This inspiring story about Vishab Mehta’s #feedthehungry act is part of our continued effort to promote noble deeds by young Indians at home and abroad. Travel Beats is a portal of community, visa, immigration and air travel news as well as inspirational stories for Indian Diaspora, by Indian Eagle, a US-based leading travel organization.