Home / Features / Surya Kasibhatta, an Indian-origin Teen with Cerebral Palsy from USA, Makes His Acting Debut and Steals the Show

“He is one of the sharpest, brightest and happiest kids I have ever come across. He brightens up the whole atmosphere. It is amazing to see him the way he is. Whenever you meet a happy child, you always wonder what makes them so cheerful and I will give all the credit to Surya’s parents that he is such a happy kid. He doesn’t question why he was born with this condition. He is very accepting of it. And he knows and believes that there are no limits to what he can do in life. He sees nothing as impossible,” Vidya Balan said, in an interview with Firstpost.com, about her co-actor Surya Kasibhatta.

8th grader Surya Kasibhatta from Texas played a teen with cerebral palsy to a single working mother essayed by Vidya Balan in Jalsa, a 2022 release on Amazon Prime. He is in real life what his reel character is. Though specially-abled with cerebral palsy, Surya made headlines for his acting debut in Indian Cinema and earned rave reviews for lending authenticity to the portrayal of his celluloid character Aayush. His character not only lightens the mood of the story following a plot twist in the beginning, but also provides stimulus to the pre-climax scene. 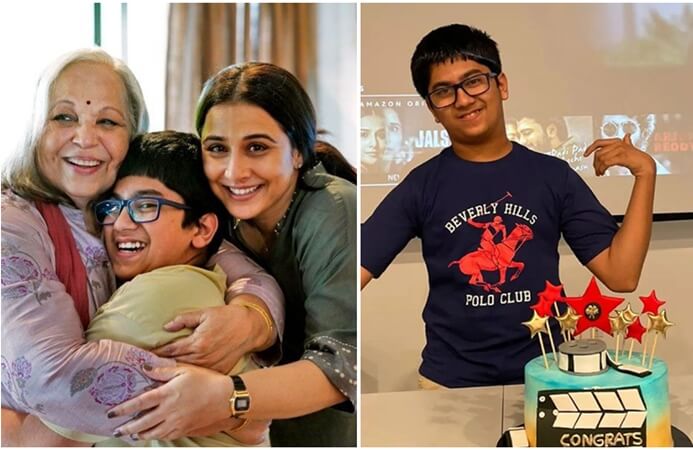 You must be wondering how the acting opportunity came to Surya, who is neither a trained actor nor has acting in his blood. The casting team of Jalsa was looking for a child with cerebral palsy. Th team contacted NGOs and therapy centers. The therapy center where Surya was undergoing therapy while living in Hyderabad reached out to Surya’s parents in the US. His father Krishna Kasibhatta, who is the Practice IT lead at System Soft Technologies in Texas, sent a couple of audition videos to the casting team.

The casting director took an interest in Surya after watching his YouTube videos wherein the latter sings and gives computer programming lessons. Filmmaker Suresh Triveni handpicked Surya from more than 150 teen actors who auditioned for the character with cerebral palsy. He got Surya and his mother flights to Mumbai from USA after India battled the deadly second wave of the pandemic. All precautions were taken to ensure his safety during the pandemic. Also, the crew was told “not to treat him differently or sympathetically”.

All thanks to the filmmaker Suresh Triveni and the casting director of Jalsa, a pathbreaking film with representation of persons with actual disabilities on screen. Most probably, Jalsa is the first Indian Hindi film to mainstream inclusion of the specially-abled for characters with disabilities. The narrative is changing with the release of Jalsa, and a new belief system is building up that specially-abled actors can portray real-life nuances more precisely and intensely than non-disabled actors. “I am happy to have played a part in making Bollywood bring inclusivity and diversity,” said Surya in his interview with BBC.com.

There are moments of intensity in the movie, including the one preceding the climax, where Vidya Balan’s character is at the peak of conflict with her conscience after the hit-and-run case and gets into a momentary confrontation with her son played by Surya. On being asked how difficult it was for Surya to act in those intense moments of the plot, his father Krishna Kasibhatta said to Travel Beats, “Surya is very mature for his age despite having cerebral palsy. He is a very happy child but when he had to look serious or be angry in front of the camera, he immediately turned into the character. He was highly motivated to make this acting opportunity count and was determined to give his best. In addition, a workshop was conducted to acclimatize him with the subtlety of the mother-son confront scene before the actual shooting. The director and other members of the leading cast, all made him very comfortable.”

“I was simply amazed by this boy’s attitude because I told him that I would have to be very brutal with him in one of the scenes. I also mentioned to him that it is a scene in which my heart is breaking and I am feeling terrible. To which he said, ‘I know that this is Aayush’s mom saying it to Aayush, it’s not you saying it to me, and also my mother would never say these things to me.’ These words from Surya actually touched my heart,” said Vidya in her interview with Firstpost.com.

“Indeed, Surya is a cherry on the cake in the cast of Jalsa movie. He not only depicted the nuances of his own character but also played foil to other characters with subtlety. Though having fewer dialogues and a limited screen space, he stands out in the collective shadow of his talented co-actors: Vidya Balan and Shefali Shah. I can’t help but admire him,” said Sourav Agarwal, the Editor of Travel Beats, a community portal for Indians in America by IndianEagle.com.

Those who watched Surya as Aayush in Jalsa on Amazon Prime might be feeling an itch to know how he is off screen. “Academically, he scores high grades in all subjects. He has won a few awards in creative writing at school district level and has also completed a course CS50 online by Harvard University. He started learning computer programming at the age of 9, and today he can write complete web applications using MERN framework (a free, open-source JavaScript software stack).  Above all, he knows that his situation is only a condition, not a disease. He has fully understood that conditions can be worked around or overcome with determination and hard work….” his father fell short of words while saying about Surya’s off-screen life.

The credit for Surya’s maturity, independence, perseverance and liveliness goes to his parents. They have accepted him the way he is; they let him explore things and find his interests; they don’t treat him differently. They noticed his strongly independent mindset at his early age. They have made him part of the decision-making process from a very young age and encouraged him to learn from such heroes as Stephen Hawking, who achieved great heights despite their challenges. To fill the atmosphere with positive vibes for him, they often talk about how aiming high unlocks the human potential inside.

Surya wants to build a voice-based operating system that can help people with speech difficulties in using computer and applications. At the same time, he wants to let the new-born actor in him grow.