The ten finalists for America’s “Top Young Scientist of 2019” title include five Indian American teen students: Reshma Kosaraju of California, Jaya Choudhary of Michigan, Nishant Lahiri of New York, Camellia Sharma of Virginia, and Samyak Shrimali of Oregon. Unsurprisingly, there was the same number of Indian Americans among the finalists in 3M Young Scientist Challenge 2018. 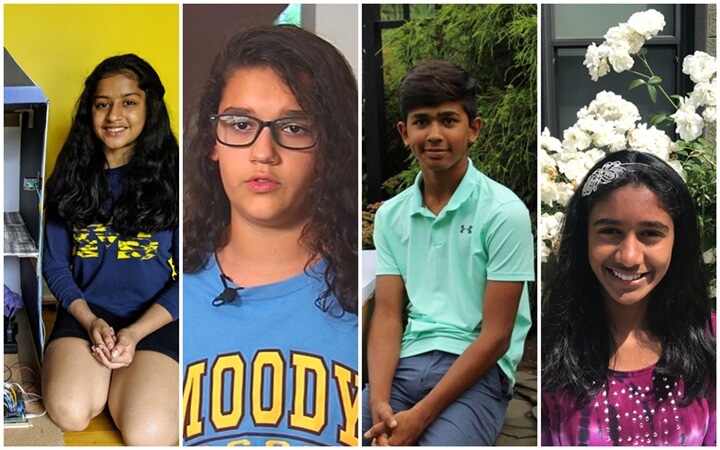 Among the finalists in 3M Young Scientist Challenge 2019 is 13 year-old Jaya Choudhary from Canton, Michigan. Jaya made it to the race for America’s “Top Young Scientist of 2019” title for her eco-friendly invention – Airflow Control Robot – which helps reduce power consumption and save on energy by controlling the flow of hot or cold air to unoccupied areas. Indian American Jaya Choudhury’s Airflow Control Robot is an effort towards lessening the impact of global climate change and energy crisis on the planet. She is a 7th grader at Canton Charter Academy.

The California Camp fire in 2018, which claimed 90 lives and caused massive damages worth $17B to the wildlife of USA, prompted 13-year-old Reshma Kosaraju to develop an Artificial Intelligence-based predictive model that uses meteorological data and the existing fire index data to predict any possible incidence of forest fire.

A resident of San Jose, California, 7th grader Reshma Kosaraju is among the 10 finalists of Discovery Education Network’s 3M Young Scientist Challenge 2019. Her wildfire predictive and preventive model is a boon to the United States that suffers an estimated economic loss of up to $350B due to the environmental damage caused by destructive forest fires.

A resident of Corning, New York, 14-year-old Nishant Lahiri developed iCART, an innovative, cost-effective solution to recycling carbon dioxide from the air. He believes that recycling carbon dioxide is a community effort towards addressing global warming. Indian American Nishant Lahiri’s iCART is an energy-efficient carbon capture solution that does not use electricity to absorb C02 from the ambient atmosphere of our homes and transmit it to a processing facility where carbon dioxide is recycled. So, no wonder why he is one of the 3M Young Scientist Challenge 2019 finalists.

12-year-old Camellia Sharma from Glen Allen, Virginia has developed underground water leakage system to help nations save water, at the current juncture of water crisis in some parts of the world, including India.

Owing to inadequate repairing of the aging water distribution systems underground, 50 billion cubic meters of water is wasted every year. The USA alone loses 8 billion cubic meters of water through leaky pipes. Water scarcity is a catastrophic problem in developing countries due to the eroding structural and hydraulic integrity of underground pipelines. Evidently, Indian American Camellia Sharma’s invention deserves to be among the finalists of Discovery Education’s “Top Young Scientist of 2019” challenge.

One of the five Indian American finalists in 3M Young Scientist Challenge 2019, Samyak Shrimali from Portland, Oregon has created a sensor-based hygiene tracking system. The 14-year-old eighth grader’s innovation helps check whether one complies with the hand hygiene requirement in hospitals and other public places where nosocomial infections, if unchecked, heighten the mortality rate. His invention underlines the importance of tracking hand hygiene compliance during an epidemic.

The 3M Young Scientist Challenge 2019 finalists will travel to St. Paul, Minnesota for an internship program, during which they will actualize their inventions or innovations into working solutions before the grand finale in October 2019. They will demonstrate the usefulness of their unique solutions in our everyday life to a panel of scientists, alongside competing in a series of scientific challenges. The winner of America’s “Top Young Scientist of 2019” title will receive a scholarship worth USD 25,000 and a free trip.