How to revive the US economy hit by the COVID19 pandemic is not just a question but a challenge to the Trump administration. With projected degrowth in the per capita income of 170 countries including the US and India, the global economy is in a terrible mess. Temporary shutdown of businesses, millions of job losses, and a record 7 million Americans having filed claims for unemployment benefits are likely to catapult the federal deficit to the highest level since the Great Depression, according to the International Monetary Fund (IMF). While the global economy is projected to shrink by 3% over the ebbing inflow of consumption-based revenue in the aftermath of the COVID19 health crisis, the American economy is on the verge of a recession. 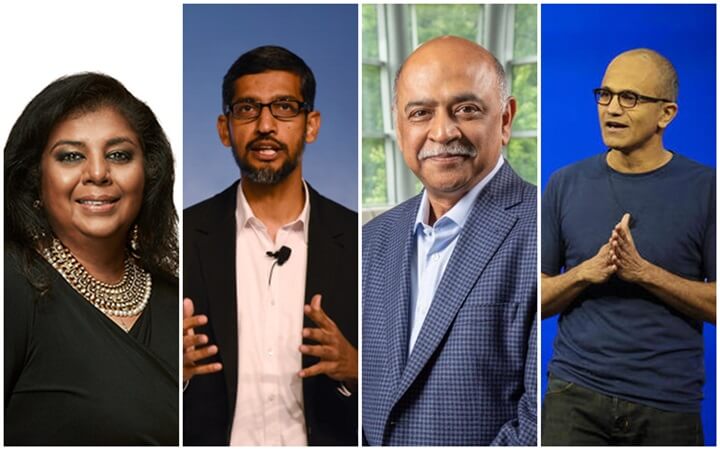 Six eminent Indian American corporate leaders, including Google Alphabet Inc’s CEO Sundar Pichai and Microsoft CEO Satya Nadella, are all set to be among the driving forces in President Trump’s Great American Economic Revival Industry Groups for a V-shaped recovery of the jeopardized US economy. Donald Trump has formed a great American leadership bandwagon with more than 200 corporate behemoths, including Apple CEO Tim Cook and Facebook’s Mark Zuckerberg, from various industries for a reversal of the economic slowdown.

“They are, I think, are the best, the smartest and the brightest,” Trump said during a press conference at the White House. Trump’s Great American Economic Revival Industry Groups will help his government take informed decisions on how to pull out the economy of America from the COVID19 slump.

Kolkata-born Ann (Anindita) Mukherjee from Dallas has been named to the manufacturing group that also includes Tesla’s Elon Musk, Mike Manley from Fiat Chrysler, and Ford’s Bill Ford. An MBA graduate from the University of Chicago, Ann Mukherjee is known for her brand management and marketing leadership.

Pune-born Ajay Singh Banga from Mastercard has been roped in as a consulting member of the financial services group for an upturn in the US economy. Mastercard CEO, who was awarded Padma Shri in 2016, is the chairman of the US-India Business Council that represents hundreds of international companies investing in different sectors across India. An alumnus of IIM Ahmedabad, Ajay Banga served on Barack Obama’s Advisory Committee for Trade Policy in 2015. He is also a member of the International Business Council of the World Economic Forum.

“The health and wealth of America is the primary goal” that the Trump government is all set to achieve under the collective leadership of the Great American Economic Revival Industry Groups, according to a press briefing from the White House. These bipartisan groups of corporate honchos from different walks of life, and the Trump administration will be working in tandem to drive the United States toward a “future of unparalleled prosperity” in the fight against the Novel Coronavirus pandemic.

A leading community portal for Indian Americans, Travel Beats is a subsidiary of IndianEagle.com – a most trusted travel booking organization in the USA. Travel Beats caters exclusive Indian Diaspora stories, latest US visa and immigration news, and US-India travel news. Subscribe to Travel Beats’ free newsletter and be one of the first few to stay up-to-date.

One thought on “COVID19: 6 Indian American CEOs Including Sundar Pichai and Satya Nadella in Trump’s US Economy Revival Groups”