Kolkata will become a world-class city once India’s first underwater metro train starts plying under the River Hooghly. The two tunnels of the upcoming metro train under the Hooghly River connecting the twin cities of Kolkata and Howrah are part of the INR 9000-crore East West Metro project, including a 10.8km underground route and a 5.8km elevated corridor. The construction of Kolkata’s underwater metro train tunnels started recently and will be finished by the end of July 2017.

Kolkata’s underwater metro train will be running 13 meters below the riverbed of the Ganges and 30 meters below the surface of the earth. About 520 meters long, the two parallel tunnels will be located on either side of the Hooghly River between Kolkata and Howrah. The 16.6-km long East West Metro route will have 12 stations: six in the elevated corridor and six in the underground corridor. 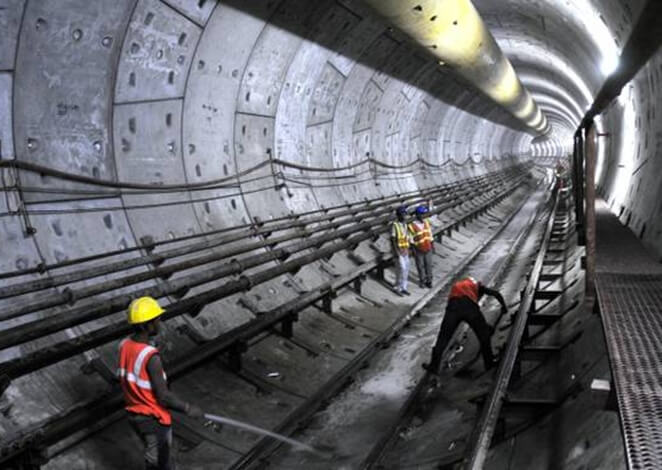 About 250 people have been employed for digging the under-river metro train tunnels. The construction is in full swing 24 hours a day. The tunnels will be sealed with a thick concrete layer to avert disasters like collapsing of earth, soil erosion, and water seepage, which are major concerns about the underwater metro train in Kolkata.

Possible damage to three heritage buildings located in close proximity to the East West Metro route is another gnawing concern with the tunneling of the underwater metro train in Kolkata. These heritage buildings among the protected monuments of Kolkata, include the Currency Building, an Italian structure dating back to the 1830s during Lord William Bentinck was the Governor General of British India. The Currency Building was home to the Reserve Bank of India in the then Calcutta until 1937.

The other two heritage sites on the verge of damage are Beth-El and Maghen David Jewish synagogues. In addition, the Howrah District Library already got some cracks which resulted from the digging of Kolkata’s underwater metro train tunnels by a mammoth Tunnel Boring Machine (TBM). The Kolkata Metro Railway Corporation Limited is trying hard to address or mitigate these concerns which are in fact difficult to deal with in a densely populated metropolis like Kolkata.

One of the tunnels for the underwater metro train in Kolkata will be built by May end or in the first week of June 2017. The construction of the other tunnel will be over by July end this year. Once one tunnel is built, the other will be dug. Two tunnel boring machines can’t work at the same time given the nature of the soil under the riverbed of the Ganges.

The upcoming underwater metro train in Kolkata is one of the things the City of Joy has in common with London. A replica of London’s Big Ben has already become a landmark in Kolkata.