‘I came, I graduated, I became a billionaire’ seems to be Indian American Jay Chaudhry’s version of ‘I came, I saw, I conquered’ (Veni, Vidi, Vici in William Shakespeare’s Julius Caesar). The eventful journey of cyber business tycoon Jay Chaudhry, from a quaint Himalayan village to Wall Street, is an inspiring story of American Dreams.

Jay Chaudhry, who was born in a Himalayan village without electricity as well as running water and studied under a tree, is a cyber-business tycoon, serial entrepreneur, billionaire and philanthropist. His net worth of USD 3.4 billion not only earned him a ticket to the elite club of billionaires, but also made him top Forbes’ 2018 list of Indian-origin billionaires in the USA. Since the pandemic hit the world economy and crippled public life, he has seen the swelling of his wealth nearly fourfold from $3.4 billion to over $12 billion. 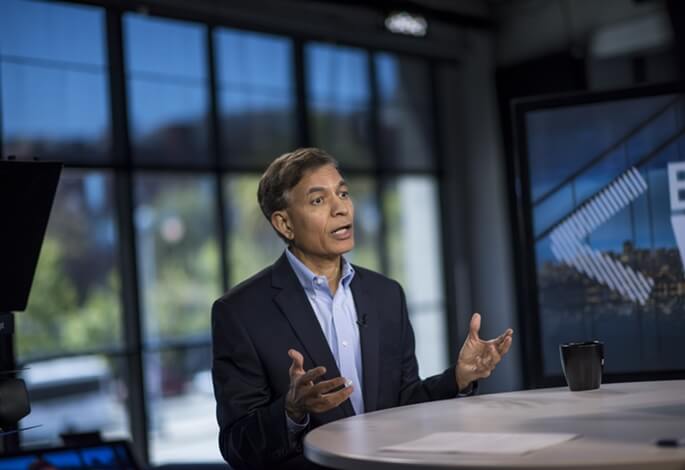 62-year-old Jay Chaudhry, CEO and cofounder of Zscaler, a cloud security firm headquartered in San Jose, climbed 577 spots in the Hurun Global Rich List 2021 after the valuation of his company’s shares shot up causing a meteoric rise in his net worth by 271% in 2020. He owns 45 per cent of Zscaler Inc., and his stake in the company is worth more than $26 billion. With employee strength of 2800, Zscaler clocked over $431 million revenue when the first wave of the pandemic was in full swing.

Years before he joined the ranks of super-rich entrepreneurs in San Francisco Bay Area, billionaire Jay Chaudhry had nurtured his American Dreams in Panoh, a remote hamlet without running water in the Indian state of Himachal Pradesh. Though he kissed success with his foray into entrepreneurship way back in 1996, he shot to fame as a Silicon Valley billionaire over the valuation of 12 million shares of his fifth venture, Zscaler Inc., at the initial public offering (IPO) in 2018.

With the pandemic pushing the global IT workforce to accept a paradigm shift in the model of work from office to home, cloud-based information security became a most pressing need of the hour for companies ranging from start-ups to conglomerates. A visionary in cyber security business, the richest Indian American billionaire Jay Chaudhry shared a glimpse of his rare business acumen during an interview with CNBC:

“The world has changed. People are mobile. Applications are sitting in the cloud. So we had to build security in the cloud. The new security can be put in place for employees so they go to the cloud, they use the internet safely.”

Intrigued by the meteoric rise of cloud-based cyber security, Indian American Jay Chaudhry launched Zscaler as a virtual security checkpost for companies exposed to cyber threats. He had founded four startups before he invested his life savings in Zscaler in 2008. After a short stint in sales and marketing positions at MNCs like IBM, he kick-started his entrepreneurial journey with SecureIT in 1996.

His first startup was acquired by Verizon in 1998, which made 70 of his 80 employees become millionaires, according to Bloomberg. Motorola bought over his second startup, AirDefense, a wireless security firm.

An alumnus of Harvard University, Massachusetts, and the University of Cincinnati, Jay Chaudhry was raised by a single mother after his father’s untimely demise. Taking a daily 4-km walk to his high school in a neighboring village was part of his humble routine. On completion of his B.Tech in electronics engineering from IIT Benaras Hindu University in Varanasi, he traveled to the US for higher studies. Even after so many years in the US, he has not distanced himself from his native village in Himachal Pradesh. He takes business flights to India and visits the Himalayan village every few years.

Unlike other billionaires, he believes “My success so far has mainly been because I have very little attachment for money.” Indian American billionaire Jay Chaudhry is so humble and down-to-earth that he says, “I definitely do not feel like a billionaire even with a billion-dollar fortune.” He defines happiness as a state of mind that money has very little to do with.