I walked out to the embrace of the muggy, hot weather. A blast of horns and flashing lights whipped across my sight, catching me off guard. Here, I stood among the thousands at the airport, waiting to see what wonders India held for me. Naturally, even after many years of traveling to India, I found myself staring out into the crowd of travelers. I noticed a range of societal differences, simply by the looks and attitudes of people from the anxious businessmen waiting for drivers to the beggars sitting near traffic signals or streetlight poles a few steps away from me. The different people I came across brought together an ideology of what India really is. To me, the sight of everything around me in India is a reflection of true humanity. We see the true colors of people in their niches.

The boundaries we see in India define the country. From walking down the busy streets of vendors yelling out, “Bhale puri!” to glittering CMR shopping malls, I was caught up in the excitement and enthusiasm of my kind of people. However, we never find ourselves wandering to look over what’s behind those advertisement walls. Over the wall, we see an overpopulated, crowded slum of families, surviving on low-profit jobs and corruption. The sight in India expresses a sense of reality. Despite corruption, India is one of the fastest-growing economies in the world with a GDP rate of 7% compared to the 1% GDP rate of America. Furthermore, India is one of the youngest and largest democratic countries.

Moreover, humidity is what catches every American off guard, especially the ones who come from up north. In the thirst-triggering heat, I simply couldn’t seem to carry myself farther. I wanted to go back to my grandmother’s house, knowing that I could be relieved by air-conditioning and water. I pulled my kurti top to wipe sweat and dirt from my skin. I took a seat in a nearby cafe and I looked out of the window. A girl passed by carrying a little bowl with paisas and rupees, looking to make eye contact with potential donors. She was wearing a similar kurti top, but it was filled with unwanted holes and had a worn-out look. I looked at the building behind her, feeling guilty and ashamed. At the same time, I felt possibility of a better life around her. There I was wearing the same kurti top and sitting in an air-conditioned cafe. That’s what India does to you. It brings you into a perspective of hopefulness and possibility. 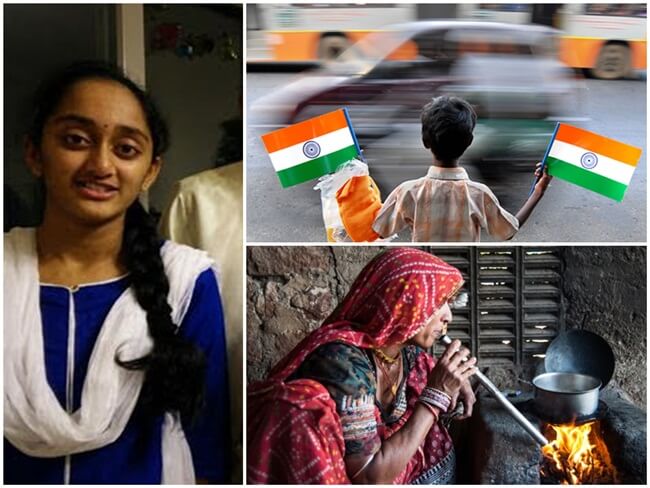 Conversely, not all women in India see this possibility. The vibrant blue paint on the walls reflected anything but my mood at the moment. I walked around the mud house of my father’s childhood and I grimaced at the sight of ants eating away the biscuits on the shelf. Still, I stared at them, hoping my gaze turn into daggers. It seemed that they lost their way to home. They walked, going from one end of the wall to another. The heavy sense of duty seemed to play with their sense of direction, creating paths of confusion. But, no one seemed to care about them. I glanced over at my aunt, who was sitting in a corner of the kitchen. She was stirring some ingredients over fire to cook a curry and sweating, with a one-year-old on her hip. Perhaps, these ants were women long ago.

My aunt is one of those Indian women who strongly believe in their household duties. In America, working women who do full-time jobs find this sort of housework as an outrageous sign of gender inequality in contrast to the women in India. An overwhelming sense of duty and a firm belief in what they hold on to in India are what continue to be the legacy of the country. Unlike India where we had Indira Gandhi as Prime Minister and Pratibha Patil as President, no other country has seen its women at topmost positions in the ruling government. India is incredible since it holds true to its age-old traditions and evolves in sync with the world changing around it.

What I’ll never forget about India is the long starry nights. Getting to sleep under the stars was a tradition for my family to bond. I’d open and close my eyes, trying to see if this world was real. I couldn’t see so many stars back in America. The pitter patter from a neighbor’s house became a regular rhythm and the dogs barking from afar were no bother. The breeze tickled my skin, wishing I could stay under the sky forever. The birds were still speaking to each other through the darkness of the night, while the crickets of grasshoppers filled the emptiness of the night.

The beauty of India was its naturality. Even though I’d turn on the TV to watch something in my language, I would come across advertisements displaying products that have been so westernized. I realized that India is caught in its own culture shock. However, the fact that it wasn’t so artificial in the most vulnerable times of the day, made it perfect in every way possible. At night, you could see the country take off a disguise to reveal something so authentic.

This type of authenticity is what drives a majority of people to be successful in India. I’ve heard stories of my father’s struggles and hardships during his growing years in India. From walking long miles to school to working in the fields, he had faced many hardships that led to disappointment at times and contentment sometimes. He might have lost hope at times, but there’s this sense of drive in India that keeps everyone going. To do what they’re best at.

They push aside the mistakes of the past and get through what is set for the future. Likewise, my father studied under a government-granted scholarship, did a job in India for a while until he came to America. It’s a common story that many first generation Indian-Americans like me hear from their parents, but it is what defines the country that is our heritage. The people of India believe in self-actualization, whether it roots back to Mahatma Gandhi’s beliefs or legends of ancient times.

Having had grown up in America, where I know my parents are there to support me when I face an obstacle or hardship.  I have got to feel a little of this self-actualization thousands of miles away from India. However, I know I am caught in a culture shock. The view I have on India is solely based on my opinions and my experiences, but for someone who has grown up there, they see and understand more. I am a foreigner in both countries.

I am an observer. I took many pictures on my trips to India, capturing every special moment of my experience. I often switch between two lenses from my Western-biased opinions of how poor the country looks and gender inequality of women to my umbilical bond with Indian culture and my innermost feeling about how beautifully the country expresses reality, shows infinite possibilities, and believes in eternal traditions.

While leafing through the pages of my album of memories, I realized that I truly captured what defines India. Standing in the muggy, humid airport the next time didn’t seem half as bad with my new perspective on India as I spoke four words, “This is Incredible India in my eyes.”

Madison-based Evanka Annyapu’s short story, ‘Incredible India in My Eyes,’ is the winning story in the Group 2 of Travel Beats Story Writing Contest 2016 hosted by IndianEagle, a leading travel partner of Indian Americans, in association with Qatar Airways. An 11th grader of James Madison Memorial High School, she is a happy-go-lucky girl with a positive attitude. She is fond of writing, horseback riding, playing tennis, playing the piano and public speaking. Evanka deeply respects journalists like Janine Di Giovanni and Katherine Boo who risk their lives to report conflicts or politically tempestuous situations in precarious places like Syria. Evanka is an active volunteer at a center for senior residents.