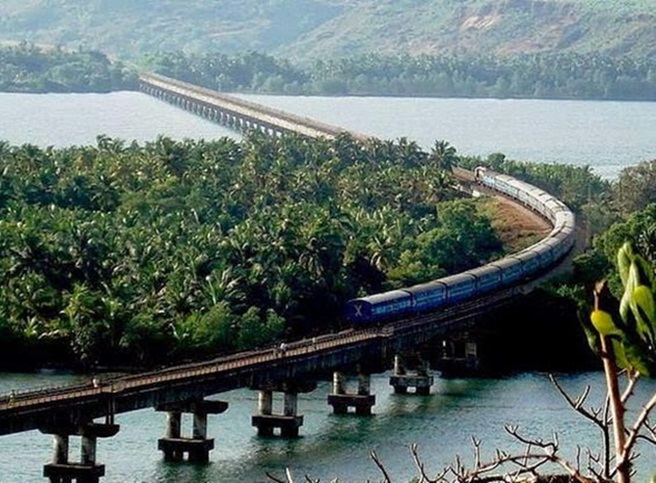 While the world’s tallest rail bridge over the Chenab River in Jammu and Kashmir is under construction and India’s fastest train ‘Gatimaan Express’ is ready to hit the track, India is planning to get the longest rail bridge in Katni district of Madhya Pradesh. The upcoming longest bridge with railway lines in India will boast a length of 14 kilometers on the up line.

Indian Railways has already conducted an initial survey on technical aspects of the project following an official approval from the Cabinet Committee on Economic Affairs (CCEA). Even the design of the upcoming longest rail bridge in Madhya Pradesh is ready. The construction would be completed in 5 years at the cost of INR 600 crore.

On completion, it would be India’s longest rail bridge in Madhya Pradesh. The bridge will be equipped with digital signaling to ensure safe operations of both goods and passenger trains. Digital signaling would be maintained online. Reportedly, goods trains are often delayed by two or four hours due to traffic congestion on the route through Katni Junction in Madhya Pradesh. Once the bridge is in place, delay of goods trains will considerably be reduced.

The Vembanad Rail Bridge from Edapally to Vallarpadam in Kochi was built over the Vembanad Lake in 2010. The 80% of the bridge is over water offering beautiful views of the serene landscape. Madhya Pradesh’s Katni Railway Junction is located in a forested area. So the upcoming longest rail bridge in Madhya Pradesh is expected to be built across a scenic route crossing the Katni River.

Jabalpur is the nearest airport at 100km distance from Katni. Katni has good road connectivity with Bhopal, Nagpur, Varanasi, Allahabad, Hyderabad and Bangalore. Among the tourist places in Madhya Pradesh, Bandhavgarh National Park is in proximity to Katni.