It is said that God can come in any form to save us in need. This maxim is true about Indian American Rajbir Singh, who received the Great Citizen Award and entered the club of Humans of California for saving a 92-year-old lady from being robbed of $25,000.

Rajbir Singh is the owner of Roseville Cab in Northern California. Recently, a 92-year-old woman booked his cab for a ride to the bank. On seeing his passenger worried, Singh drew her attention and started talking to her. He sensed something unpleasant the way – gnawing and incoherent – she was responding to him. On furthering the conversation with her, he got to know that she was going to withdraw $25,000 from her bank account and settle a debt with the IRS. 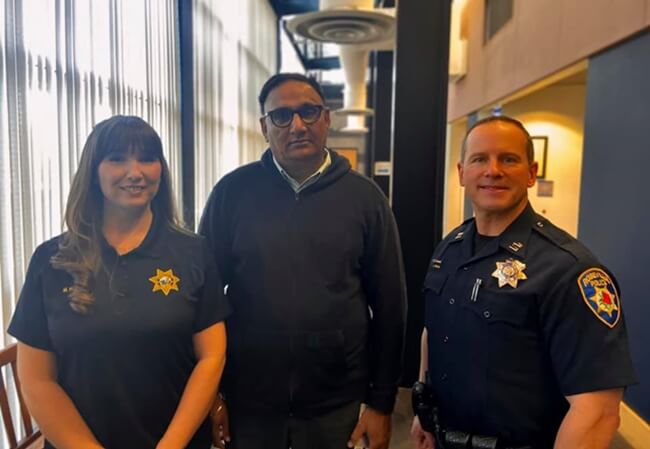 Instinctively, Rajbir founded it fishy and told her outright that it could be a trap to scam her. He advised her to evade such money-laundering scams, which are common these days. Initially, the woman turned a deaf ear to him. She found it difficult to believe what he told her could be true.

The woman told Rajbir that she had got a call from the IRS (Internal Revenue System, a federal agency) asking her to write off her debt. He took the number she had got the call from and called it. A man answered Rajbir’s call, and on being asked whether he knew the 92-year-old lady in Roseville, he denied. He called the man back, but the man posing an IRS officer hung up the call. On being called repeatedly, the scammer blocked the number.

On seeing her confused and puzzled, he entreated her to rethink what she was going to do and believe him for a while. When she was procrastinating what to do, Rajbir Singh routed the cab to the Roseville Police Station so that an officer could dissuade her from withdrawing her money and falling into a trap.

While the woman was sitting in the cab outside, he entered the police station and narrated the entire incident to an officer. Then, the officer talked to her and convinced her that she was about to fall prey to the scammers. Finally, she believed both the officer and Rajbir Singh. Then, Singh drove her back home. She thanked him, blessed him, and rued not believing him initially.

“Raj could have just taken his customer to her stop and not worried about her well-being. He had the great forethought to bring the almost-victim to the police station for an official response. His quick thinking saved a senior citizen $25,000 and for that, we greatly appreciate his efforts,” wrote the Roseville Police in its official Facebook post.

This inspiring story of Roseville Cab owner Rajbir Singh is part of our continued effort to promote good deeds of Indian-origin people in USA, at Travel Beats, a leading community portal for Indians in the US. Travel Beats is a subsidiary of Indian Eagle Travel, a most trusted international air travel booking partner of Indian Americans.