Indian American Community may be one of the minorities in the United States (1% of total US population), but it significantly contributes to the US economy. That’s why President Donald Trump acknowledged during his first Diwali celebration in the White House on October 17 and at the National Minority Enterprise Development Week Awards event on October 24, 2017. Two Indian American entrepreneurs received the National Minority Business Awards 2017 from Trump in the White House.

Sharad Thakkar, the President of Polymer Technologies in Ohio, and Karan Arora, the CEO of Natural Vitamins Laboratory in Florida were on President Trump’s list of nine minority businesses for their contributions to the socio-economic progress of the USA. Natural Vitamins Labs’ director Karan Arora received the Minority Export Firm of the Year 2017, and Sharad Thakkar’s Polymer Technologies was recognized with the Minority Energy Company of the Year 2017. 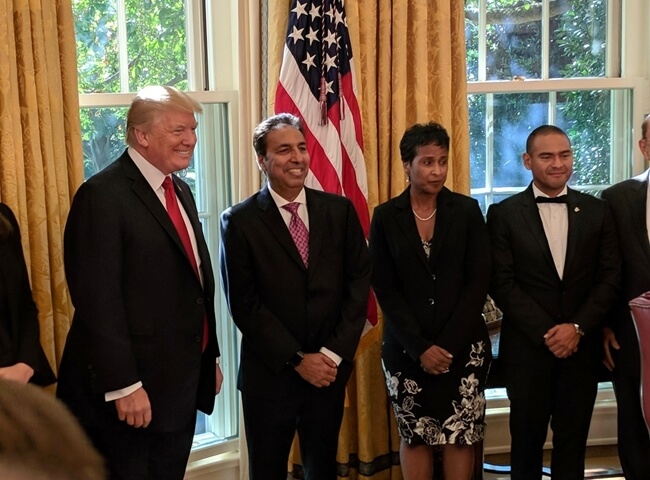 “There are 996,246 minority-owned businesses in the USA, which employ 8 million people and generate over $1 trillion of annual revenues. Only 22% of the total minority businesses have 10 or more paid employees. The work you do and the products and services you bring into this world generate new prosperity across America. For that, we are in your debt,” said Trump at the National Minority Enterprise Development Week Awards 2017 in the White House.

Based in Miami, Karan Arora is the director and CEO of the family-owned Natural Vitamins Laboratory, a name of international repute, which exports its health products to more than 40 overseas markets across the globe. The business has grown and evolved over the past 25 years of experience. Currently, Natural Vitamins Laboratory operates from a 95,000 square feet facility in Miami, Florida. Karan shifted to the United States from Mumbai for higher studies.

Subscribe to Receive Our Latest News and Stories of Indian Americans

Indian American businessman Sharad Thakkar originally belongs to Baroda or Vadodara in the Indian state of Gujarat. He came to the USA around 30 years ago.

Both winners of the National Minority Business Awards 2017, Karan Arora and Sharad Thakkar expressed their faith in President Donald Trump’s new policies for simplifying the tax code for minority businesses in America. They said that President Trump’s tax reform measures would not only streamline the overall process but also pump more money into businesses.