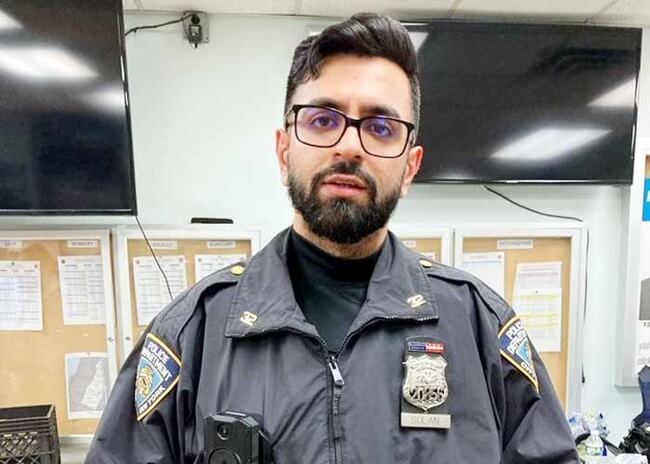 The most recent shooting in the Harlem neighborhood of Queens, NYC saw Indian American Sumit Sulan, a rookie cop, act decisively in the face of a deadly situation. Sumit who joined the New York City Police Department 9 months ago is being hailed as a super rookie for shooting a convicted felon. The 47-year-old felon Lawshawn MacNeil gunned down one of the police officers and injured the other. The injured also died four days after the incident.

On January 21, the New York City Police Department got a call about domestic violence from MacNeil’s residence in Harlem and sent three cops including Sumit Sulan to investigate the call. Reportedly, MacNeil got into a tiff with his mother over the lack of vegan food in the kitchen. The moment the cops entered the residence, a fatal shootout ensued. With his gun, a Glock 45 that he owned unlawfully, MacNeil shot down two of the rookie cops: 22-year-old Jason Rivera and 27-year-old Wilbert Mora.

In the blink of an eye, Indian American Sumit Sulan retaliated and fired back at MacNeil. As per his reports to the media, the rookie cops did know that MacNeil was armed. 47-year-old MacNeil, a convict in four other cases, was out on probation on a 2003 felony narcotics charge in New York. The casualty would have been more if Sumit had not acted in the nick of time. Sumit is still in shock of the deadly mayhem, according to his mother, and is trying to come to terms with whatever happened. “I feel very bad for my colleagues who died in the shootout, and their families,” said Sumit.

This story of bravery is brought to you by Travel Beats, a leading community portal for Indians in America, and a Subsidiary of Indian Eagle Travel. Sign up for Travel Beats’ newsletter for the latest community stories, US-India travel news, and visa updates.