The United States has been taking pride in its history of women serving in the Army since the American Revolutionary War. A few women participated and fought in the Revolutionary War, but under the garb of man. During the World War I, about 21,000 women exemplified nationalism and patriotism as gender-neutral ethos by serving in the US Army Nurse Corps, which later became the Women’s Army Auxiliary Corps in 1942; and it saw the participation of over 150,000 during the World War II. In 1978, the Women’s Army Corps (WAC) was disbanded to make way for women’s integration into the regular male units of the US Army, after the federal service academies including West Point were allowed to admit female cadets in 1975. The US Military Academy at West Point admitted its first batch of 119 female cadets in 1978, out of which 62 graduated successfully in 1982.

22-year-old Simran Patil graduated from the West Point Military Academy this year and entered an elite club of the few Indian American graduates from the same academy, making the desi community proud of its contribution to the US Army. In the past two years – 2017 and 2018, Indian American Sneha Singh and Neha Valluri graduated from West Point and made it to the US Army as second lieutenants. 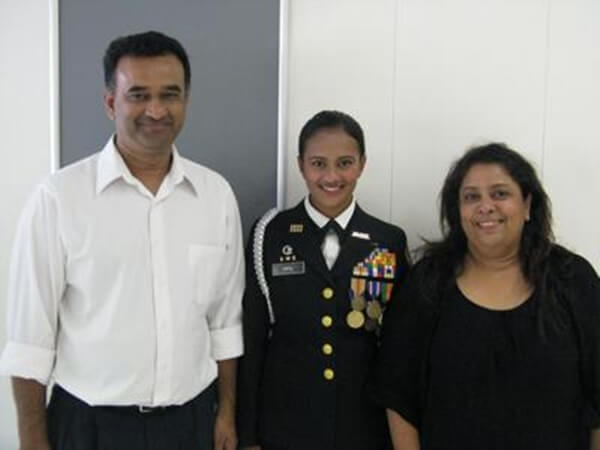 The US Military Academy of West Point in New York offers all-expenses paid four year college education and world-class cadetship. West Point’s graduates are appointed as second lieutenants for five years of active service in the US Army.

Born in Bengaluru, Simran Patil holds a bachelor of science in international relations with specialization in cyber engineering other than being a West Point cadet. She chose West Point over the US Air Force Academy when she was in the final semester at an Arizona school, after much to and fro between the two options.

She will be deployed at Fort Hood, Texas, one of the largest US military bases in the world for heavily armed forces. At Fort Hood, Simran will be in charge of material supply and distribution management with focus on aerial delivery. As a second lieutenant officer, she will be at the helm of providing supply support to soldiers in field services. Currently, she is all set for the Quartermaster Basic Officer Leaders Course, a four-month orientation program that will induct newly commissioned officers like her into their lines of duty.

Having no military background in the family, Indian American Simran Patil went through thick and thin, which tested her academically, physically and psychologically, in the past four years at West Point, New York. As they say failure is the pillar of success, she learned from her failures to be resilient, confident and promising. On the strength of her continued effort to accomplish in whatever she tasted failure, Simran Patil came through with flying colors.

At West Point Military Academy in New York, what she found the most challenging was survival swimming, one of the physically strenuous courses in the cadetship curriculum. Being an average swimmer, she would tend to sink while wearing a vest with two heavy containers full of water and carrying a dummy rifle. Besides, there were other obstacles under water, which she needed to overcome while making every possible effort to prevent her from sinking. She describes it as her “greatest physical challenge.”

Even the very beginning of cadetship at West Point was very arduous, as Simran Patil says. On their initial days at West Point, she and other cadets were required to practice ruck marching, which is walking several miles holding a heavy rifle and carrying a 50-pound backpack during Cadet Basic Training, a 6-week introductory training. Just in two months, she became a Cadet Basic Training leader in charge of ten new cadets. Simran credits her time management skill to the training at West Point.

Simran Patil grew up in California along with her elder brother who is an international trade attorney for the federal government in Washington DC. Since childhood, she has equally excelled in studies and extracurricular activities. She learned ice skating at 4, and joined gymnastics when she was five. Even she finished second at the state level gymnastic championship. She was ranked first among 250 students in high school. She maintained the rank throughout her high school period and became valedictorian.

“The US Military Academy of West Point has been the outstanding professional foundation of my leadership skills and commitment to serve soldiers in the best interest of the nation as a US army officer,” said Simran Patil.

This exclusive story is part of our continued effort to rejoice in the achievements of young Indian Americans, at Travel Beats, a leading desi community portal for Indians in the US. Travel Beats is a subsidiary of Indian Eagle Travel, a renowned international air travel booking organization.