Water is the foundation of earth and the elixir of life on the planet. Millions of lives are endangered due to lack of clean, safe, drinkable water in developing countries, including India. Freshwater makes up only 2.5% of the total water on earth, and only 1% of freshwater is easily accessible and safe to drink. The rest is undrinkable saltwater. India itself is grappling with acute water crisis and trying various measures of water conservation to get over it.

The number of people affected by water crisis in India has shot up from 330 million in 2016 to nearly 600 million this year. Chennai, a metropolis of five million, is one of the most affected victims of water scarcity in India. The continued depletion of water in four of Chennai’s major reservoirs to an alarming level, leaving a majority of the city populace bereft of water in everyday life has caught global attention. Reportedly, a rainfall deficit of 41% in Tamil Nadu is adding to the repercussions of water shortage in Chennai this year.

With the tempo of life coming to a standstill in the water-crisis-hit states of India, temple priests of Karnataka, Tamil Nadu and Andhra Pradesh have got themselves busy leaving no stone unturned to appease the rain god for good showers. On the other side of the globe, a cost-effective method to make saltwater drinkable is a new ray of hope to flip the depressing pictures of water crisis in India and other parts of the world. 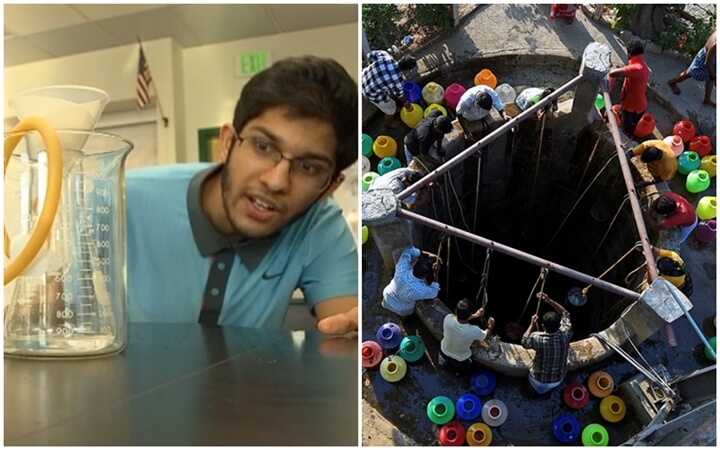 All thanks to Chaitanya Karamchedu, an Indian American high school senior from Portland, for giving the world a new lease of life! He brainstormed an idea for his science project at Jesuit High School, Portland and invented an affordable method to turn seawater into drinking water, which piqued the interest of many international tech firms. This Portland Indian teenager’s method of desalination is a pleasant surprise in the face of the futility of years-old experiments in world-class science labs. (Watch a video clip of his project below)

Indian American Chaitanya Karamchedu’s method to make saltwater drinkable is being lauded as a scientific breakthrough. When he found that desalination is not available in many inaccessible coastal areas due to high-cost implementation, he made up his mind to develop a cost-effective solution to desalt seawater. He also discovered that seawater is not saturated with salt. It led him to work with an absorbent polymer to filter out pure water from the water bonded with salt, during his experiment in the science lab at Jesuit High School, Portland.

Chaitanya Karamchedu found that only 10% of seawater is saline but the remaining 90% is not bonded to salt particles. Unlike scientists, he tried to figure out a cost-effective desalination method for the 90% instead of the 10%. His method to make seawater drinkable for a larger part of the world is a boon to millions of people without access to clean, safe water, and those grappling with inadequate drinking water.

Desalination, which is currently a most-practiced method to desalt seawater, is not just too expensive but also not supported by environmentalists for its high-level energy consumption. The Portland Indian boy, Chaitanya Karamchedu’s method to make saltwater drinkable is a cost-effective and energy-efficient solution.

The US Agency for International Global Development awarded him $10,000 at Intel’s International Science Fair so that he could continue the experiment and pursue the research for further development of the method. It also earned him the second prize at MIT’s TechCon Conference.

This story is brought to you by Indian Eagle, a most trusted air travel booking partner of Indians in the USA. Indian Eagle not only offers cheap air tickets for flights to India, but also promotes stories of achievements and inspiration on its Indian community portal, Travel Beats.