Newsmakers make headlines for varied reasons.  96-year-old Mann Kaur is making news for defying age, giving the youth a run for their money. Kaur will be participating in the Delhi Half Marathon to be held at the NSIC ground, Exhibition Complex, New Delhi on 30 Se 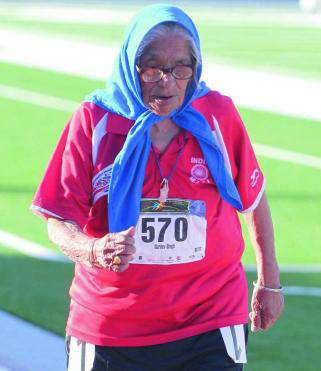 Kaur will be the cynosure of all  eyes at the Delhi Half Marathon that enjoys IAAF Gold Label Status.

Hailing from Chandigarh, Kaur has trained with her 75- year old son Gurudev Singh. She has already bagged a gold medal each in the 100 and 200-meter categories, representing the Masters Athletic Federation of India, held at the World Masters Athletic Championship in Sacramento, USA.

“I feel privileged to have represented India at the World Masters Athletic Championship. This year, my son and I are participating in the Airtel Delhi Half Marathon and I am really excited. It’s a message for all the people around -Have Feet, Will Run, Have Will, Will Triumph!”

The Half Marathon has received 10609 entries and Kaur is sure to stand out in the crowd. Her son Gurudev Singh will also be participating along with his mother.

Gurudev Singh said, “In 2008, I went to Canada for the World Masters Championship where I saw a participant named Olga who was 90-years-old. It was then that I convinced my mother to take up athletics as I knew her fitness levels.”