The 2016 National Book Award of America is conferred on Indian American activist, writer and lawyer Deepa Iyer for her first book, We Too Sing America: South Asian, Arab, Muslim and Sikh Immigrants Shape Our Multiracial Future. The book is a critical account of America’s changing racial landscape and the role of various immigrant communities in it.

Though the book We Too Sing America was published in November 2015, its story is influenced by the dire consequences of the 9/11 terrorist attacks, which is still a trauma in the memory of America. The World Trade Center Attack in 2011 turned the racial landscape of USA upside down to the disadvantage as well as harassment of the Sikhs, the Arabs and the Muslims, which persists even after so many years. 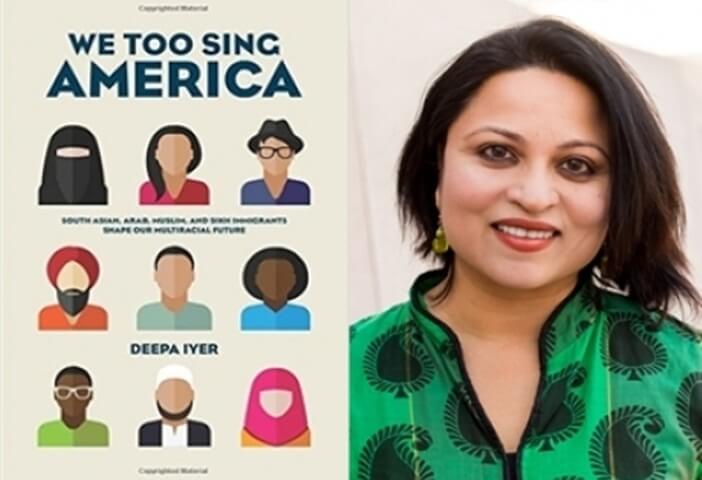 When the September 11 attacks shook the collective being of America, Deepa Iyer was working as an attorney in New York. It begot a widespread anti-immigrant sentiment which injected fears of racial outcry into the nerves of South Asians, Sikh Indians, Muslims and Arabs in America. The constant reporting of communal tensions post 9/11 attacks from all over the United States deeply hurt and moved her.

Born in Kerala, she relocated to Kentucky in USA with her parents when she was twelve. She graduated at the University of Notre Dame Law School and Vanderbilt University. Deepa Iyer too faced the ordeals of being an immigrant.

Published by the New Press, the book We Too Sing America exposes the links between Islamophobia and xenophobia and racial anxiety through the stories of violence against the immigrants, including the 2012 shooting at the Oak Creek Gurdwara in Wisconsin, and the protest against the construction of Islamic Center of Murfreesboro in Tennessee.

Currently a Senior Fellow at the Center for Social Inclusion in New York, Deepa Iyer worked on immigrant and civil rights issues at the Asian American Justice Center in the late 1990s. She also gave lessons on Asian American movements and took classes on the South Asian American communities at Columbia University, Hunter College. She is an adjunct professor at the University of Maryland too.

Apart from the 2016 National Book Award of America, Deepa Iyer’s We Too Sing America is one of the Top 10 Multicultural Non-fiction Books of the Year 2016.