The fourth richest US state in 2018 and the eight wealthiest US state in 2019, Massachusetts is home to more than 60,000 Indian Immigrants and over 30 Hindu temples. The Indian community in Massachusetts is all set to build a Shiva temple on a land of 17 acres in Bellingham. The construction of the Bellingham Shiva temple, MA will commence in 2020. The land cleaning on the proposed temple site would take place later this year.

Located on the southwestern fringe of Metropolitan Boston, Bellingham is a rapidly growing town with a population of over 20,000. What Bellingham is known to Boston Indians for is the Boston Sri Kalikambal Shiva Temple, which has been conducting prayer services and community welfare programs under a rented roof for a couple of years.

Sri Kalikambal Shiva Temple in Boston is the second jyotirlingam temple in the USA. Santa Clara’s Maha Kaleshwar Temple in San Francisco Bay Area is the first jyotirlingam temple consecrated to the fierce incarnation of Lord Shiva. Both the temples are sacred manifestations of Swami Sathasivom’s unique vision of twelve jyotirlingam shrines in the United States, on the lines of 12 Jyotirlingams in India. Swami Sathasivom is a leading practitioner from the Saiva and Sakta order. He is the elder son of Sambamurthy Sivachariar, an eminent Hindu priest of Sri Kalikambal Temple in Chennai, India. 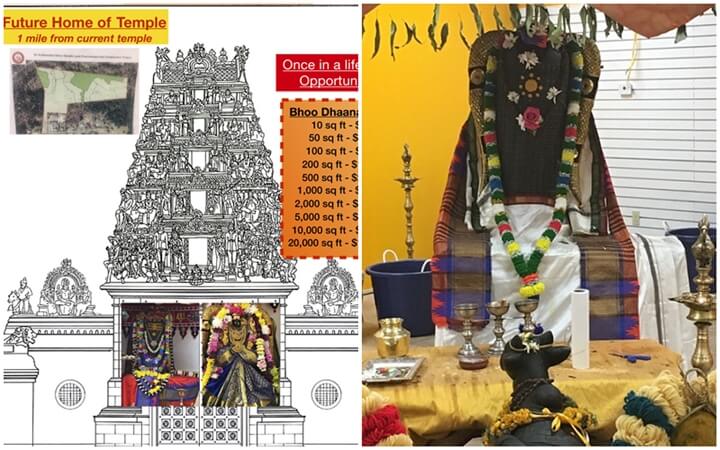 The upcoming Bellingham Shiva temple would be the new and permanent abode for the presiding deities of the Boston Sri Kalikambal Shiva Temple, in 2020. The construction will be completed in a phased manner. The first phase will have the main temple building and a parking lot for nearly 300 cars. The second phase of the Bellingham Shiva temple construction will have a sanctuary, a community hall, a staff residence unit, a dormitory for visitors, classrooms, etc.

A stream run through the 17-acre land acquired for the new Shiva temple in Bellingham, and six acres of the site comprise wetland. The Boston Sri Kalikambal Shiva Temple board has decided to keep the wetlands undisturbed in order to protect the ecosystem and preserve the natural ambiance around the future temple. “If any tree in close proximity to the wetlands is uprooted to make way for construction, we pledge to compensate the loss of one tree with two trees,” said Mrs. Mangalam Sambamoorthy, the president of the temple board.

Having obtained all legal permits for the Bellingham Shiva temple project, the Boston Sri Kalikambal Shiva Temple is looking to broaden the horizon of community activities and cultural enlightenment, which has not been possible till date because of the limited space at the current place. The present temple offers Sanskrit lessons, but the temple authorities have plans to offer classes on several Indian languages at the new location, since Boston houses different Indian communities.

Since the foundation of the Sri Kalikambal Shiva Temple in Boston, the temple board has been serving the local community in various ways, including two annual scholarships of $1000 each in recognition of high school seniors’ outstanding volunteer service. The new Shiva temple in Bellingham, MA will facilitate execution of the cultural agenda including a number of educational activities other than Indian classical music and dance, according to Mrs. Mangalam Sambamoorthy.

The Bellingham Shiva temple complex may have a community kitchen or canteen to serve devotees, much like Queens Ganesh Temple in New York and Groton Sai Temple in New England.

The Boston Sri Kalikambal Shiva Temple in Bellingham is dedicated to three Shivalingas, including the presiding deity, Lord Omkareshwara. Sri Kalikambal, an incarnation of Goddess Shakti is another chief deity of the temple. Lord Omkareshwara is a powerful god of mercy and healing. Lord Ganesha, Lord Ayyappa, and Lord Anjaneya are the other gods at the Shiva Temple in Bellingham, Massachusetts.

Brought to you by Indian Eagle Travel, a leading travel booking organization in the US, this article is part of our continued series of Indian community news and stories at Travel Beats. You can contact at 508 966 8332 or write to smspeetam@gmail.com if you wish to contribute to the making of the new temple.