A few Indian American teen volunteers in grades 5 to 12 are among the 102 state honorees selected for the 2019 Prudential Spirit of Community Awards. The national honor is given in recognition of top youth volunteers’ outstanding volunteer service to people with disabilities, homeless kids, teens with mental health disorders, communities affected by winter storms, needy children affected by deadly diseases, and likes.

Each of the 102 state honorees including Indian American teens will receive a cash prize, a silver medallion and a fully-paid trip to Washington DC, where 10 of the state honorees will be selected as the United States’ top youth volunteers of 2019. Each of the top 10 youth volunteers will be felicitated with a cash prize of $5000, a gold medallion, a crystal trophy for the school of their choice, and a $5000 grant for their chosen nonprofit organization.

We at Travel Beats, a community portal for Indians in USA by Indian Eagle Travel, picked five of the Indian American honorees of the Prudential Spirit of Community Awards and decoded why they deserve to be among America’s top youth volunteers of 2019. 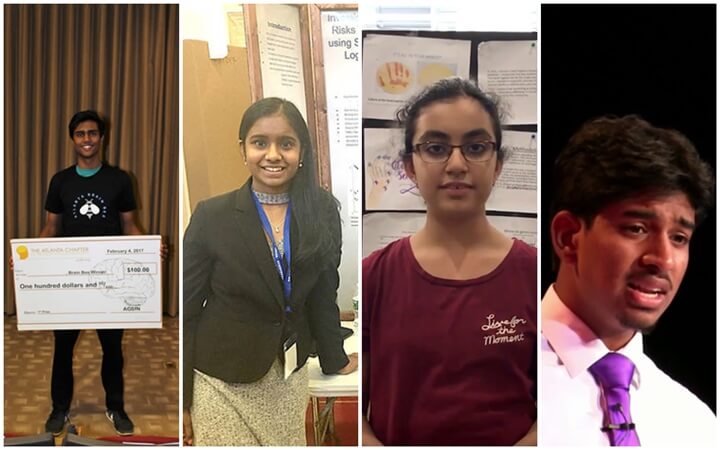 Among the Indian American honorees of the 2019 Prudential Spirit of Community Awards, Anish Bikmal from Georgia is the president of ‘Motivate and Inspire’ academy which raises funds through tutoring of local students by volunteering tutors for charities in India. A 17-year-old senior at South Forsyth High School, Anish Bikmal had had an epiphany about the misery of farmers near Mumbai during one of his trips to India a few years back. The farmers’ helplessness due to inadequate harvests to provide for their families, which could be attributed to their lack of knowledge on modern agricultural techniques, made Anish come up with the nonprofit initiative to benefit poor farmers, hungry children and needy people with cataracts in India.

Anish Bikmal whose parents moved from Hyderabad to the US in 1999 won the Future Business Leaders of America (FBLA) National competition two year ago and donated the prize money to the Temple of Vedic Planetarium while visiting Mayapur in West Bengal.

17-year-old Jothi Ramaswamy from Mohegan Lake in New York is a staunch advocate of STEM skills for girls. In order to encourage girls for STEM careers, she founded ‘ThinkSTEAM’, a nonprofit having an ‘a’ that stands for arts. Jothi believes that art is as important as technology and that one’s artistic traits or creative skills can be combined with technology for better results. When she learned that there were only boys, no girls in her brother’s computer coding class, she gritted her teeth to even the playing field for girls in STEM.

A senior at Lakeland High School, this New Yorker of Indian origin got further inspiration from her mother, an engineer, who restarted her career to provide for the family after Jothi’s father died. The success of her first workshop on wearable technology with focus on the intersection of technology and fashion, in collaboration with IBM, strengthened her confidence and fetched her opportunities to collaborate with school districts for workshops on STEM. Jothi Ramaswamy has conducted over 45 workshops for girls in 3-12 grades so far in partnership with Facebook, Google, Amazon, Columbia University, Stanford University and likes.

The founder of ThinkSTEAM, Jothi Ramaswamy is rightly selected as one of the youth volunteers for the 2019 Prudential Spirit of Community Awards.

A resident of Bellevue in the US state of Washington, 11-year-old Mehr Grewal actively promotes healthy eating habits and correct hand-washing techniques. One of the youth volunteers selected for the 2019 Prudential Spirit of Community Awards, Indian American Mehr had an epiphany, “A simple measure like correct hand washing can actually save lives,” in the wake of a recent flu epidemic in the United States. With some research on hand hygiene, she made presentations about the importance of hand washing and demonstrate the proper hand-washing technique at schools as well as community centers.

A long-time volunteer for a nonprofit in Seattle, Mehr Grewal is looking to propagate the simple message, “Hand-washing is like a do-it-yourself vaccine which can protect the vulnerable from getting exposed to diseases.”

A sixth-grader at Odle Middle School in Bellevue, Mehr also initiated a nutritional counseling program to educate people about healthy eating habits and healthy die choices. She translates the content of the program in Hindi and Punjabi, whenever needed, in order to benefit a maximum number of people. She does also volunteer at a food bank.

Among the youth volunteers selected for the Prudential Spirit of Community Awards 2019, Indian American Ishika Gupta is a budding philanthropist in North Dakota. A senior at Davies High School in Fargo, she is committed towards curbing the infant mortality rate which has improved by 15% from 6.86% to 5.82% in the United States. Her nonprofit organization, Cradle Me Care, donates bassinets to the underprivileged families that can’t afford a bassinet-like secure place for their premature newborn to sleep.

While volunteering at the American Indian Resource Center, Ishika Gupta learned that unsafe sleeping arrangement is one of the reasons for sudden infant death syndrome in the US. Gupta, who herself was born premature, thought of how her parents kept her safe and warm in a bassinet. She has purchased more than 100 so far and donated them to the organizations that parents of newborn seek help from. The founder of Cradle Me Care, Ishika also works towards mitigating disparities in tribal oral health.

16-year-old Pranav Rajan of Lincoln, Nebraska is a cofounder of CodeForChange which has started making a foray into California and New Jersey. In the ninth grade, he realized that learning by doing is many times more effective than learning by studying. This epiphany is the foundation of his organization where high school students get a taste of experiential learning while voluntarily working on computer-based technology projects for community welfare. CodeForChange is why Indian American Pranav Rajan got selected for the 2019 Prudential Spirit of Community Awards.

Having partnered with two universities and two school district administrators, Pranav Rajan roped in more than 50 students to work on real-life applications of the concepts taught in school. Those include a technological solution for a health nonprofit to help doctors reduce their stress, an automated data processing system for an analytics company, and a website for an entrepreneurship organization.