Google India and Tata are the latest harbingers of women’s digital literacy in rural Bengal. The search technology giant in collaboration with the Tata Trust has launched the Internet literacy program, ‘Internet Saathi,’ ushering in an era of e-Renaissance for women in the rural backwaters of West Bengal. The program is aimed at inducting 1 lakh women into the world of Internet in 400 villages across Bengal. (Watch the ‘Internet Saathi’ video below)

The then undivided Bengal had always been on the forefront for women empowerment through education during the pre-independence era of India. The noble souls of Bengal, including Satyendranath Tagore, Raja Rammahon Roy, Ishwar Chandra Vidyasagar, Swami Vivekananda and Sister Nivedita were the torchbearers of women’s literacy during the Renaissance of Bengal. Even the female members of the great Tagore house, Jorasanko Thakuarbari in the then Calcutta, had added to the collective effort to bring women out of the veil of ignorance to the light of literacy. 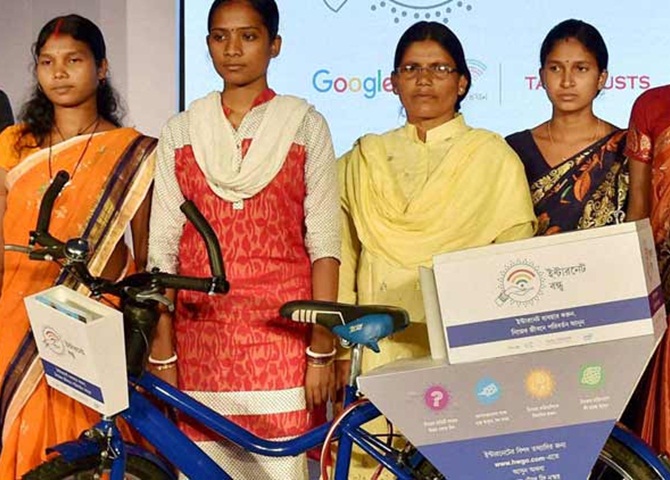 Unfortunately, in the post-independence era of India, West Bengal failed to further the efforts made by the legendary reformists, activists and revolutionaries for such possible reasons as political hurly-burly, socio-economic erosion, mass agitation, labor strikes, student unions, immigration of refugees from East Pakistan and likes. However, Bengal is at the threshold of a positive change in its socio-economic fabric through Internet literacy of rural women just as every dark cloud has a silver lining.

Google and Tata will jointly train rural women about the World Wide Web and its uses under the Internet Saathi program. Once those women are certified to be Internet literate, they will be given a bicycle, a smartphone, a tablet and some training material so they can carry the torch of digital literacy to their neighboring villages.

First the rural women from Purulia district of Bengal will be brought under the purview of the ‘Internet Saathi’ program, which will gradually be rolled out across the rural interiors of West Bengal, according to Sapna Chadha, Head of Marketing, Google India. Language barrier and remote geography are major obstacles between the mission and its success.

Only 8.7% of Bengal’s rural female workforce is self-employed. Only 0.9% of the working rural women of Bengal fall in the regular / salaried category. So Google India’s Internet Saathi program is expected to empower the rural women of Bengal with digital access to agriculture, educational and healthcare resources for their socio-economic betterment.

Launched in India in July 2015, Internet Saathi has spread across five Indian states. At the current phase of the mission, Google India is focusing on Internet literacy of rural women in West Bengal, Tripura, Assam and Uttar Pradesh.