India is gearing up for the Independence Day celebration. With 15th August around the corner, Indians or Indian-origin communities across geographies have been preparing for blissful moments of hoisting the Tricolor with immense pride. When we look at the waving Tricolor, we hold our heads high and feel proud of our nationality irrespective of what corner of the world we are in. The Tricolor, India’s national flag is not just a piece of cloth. It is a fabric of peace, prosperity, patriotism, harmony, history, vigor and victory. 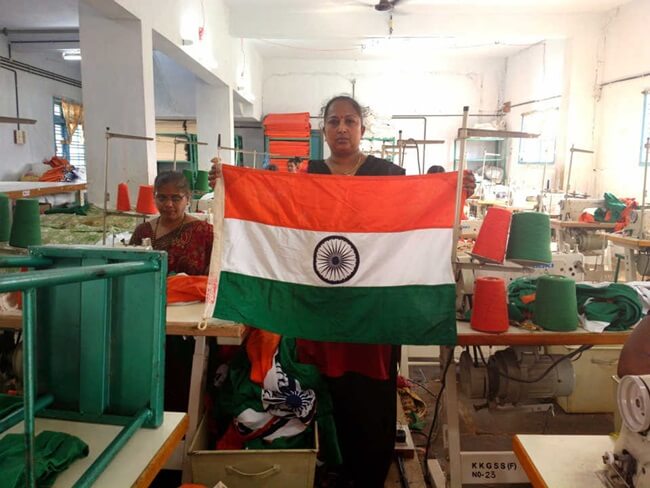 A small village in India has been weaving fabric for the Tricolor for years. The charkhas and handlooms at Tulasigeri in Bagalkot district of Karnataka are never at rest. They are always in use for weaving the khadi cloth required for making the national flag of India. The flags that are hoisted at the Red Fort in Delhi, and Indian government offices as well as Indian embassies across the world are weaved and stitched at Tulasigeri village in Karnataka.

The unit of khadi weavers in Tulasigeri village is known as Khadi Sangha. The Khadi Sangha apart, Karnataka houses India’s only authorized national flag manufacturing unit, the Karnataka Khadi Gramodyog Samyukta Sangha. Located at Bengeri in Hubballi district, the national flag manufacturing unit is certified by the Khadi and Village Industries Commission of India. It operates in compliance with the parameters set by the Bureau of Indian Standards.

At the Karnataka Khadi Gramodyog Samyukta Sangha, it is the women who have been manufacturing and supplying flags to the whole country since 2006. Though dissatisfied with the inadequate wages, the women relentlessly work throughout the year out of their immense pride in making the Indian national flag which Indian soldiers fight for and which millions of people respect. 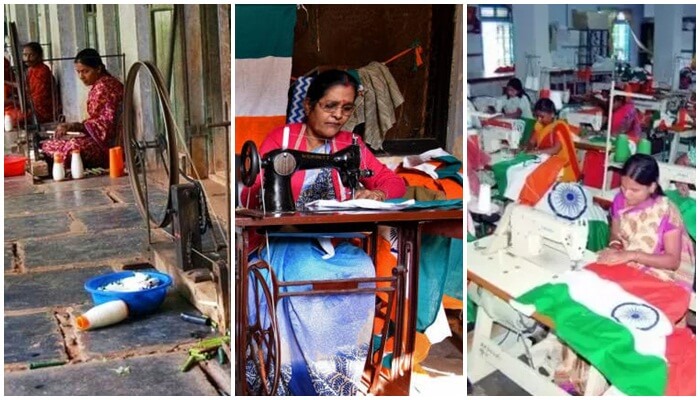 In 1957, freedom fighter Venkatesh Magadi and his accomplices founded the Karnataka Khadi Gramodyog Samyukta Sangha and brought several units of khadi weavers as affiliates under one roof. These khadi-weaving units, including the one in Tulasigeri village have been doing their best in promoting and popularizing khadi.

The Khadi Sangha of Tulasigeri village in Karnataka was assigned the responsibility of weaving cloth for the Tricolor in 2005 given its efforts in popularizing khadi. Since then, it has been handlooming the special khadi cloth for the national flag of India. It has woven cloth for about three crore flags for Indian government offices in the past 13 years.

The khadi cloth for the Tricolor is brought from Tulasigeri village to the national flag manufacturing unit at Bengeri in Hubballi, where the cloth undergoes a meticulous treatment for dyeing and screen printing before it is cut and stitched into what we salute. The Indian national flag is manufactured in nine sizes measuring from 0.5×0.3 feet (the smallest) to 21×14 feet (the biggest).

The women at the Karnataka Khadi Gramodyog Samyukta Sangha in Bengeri unerringly adhere to the Flag Code of India 2002 and the guidelines framed by the Bureau of Indian Standards. They ensure the exact measurements, colors, size and thread count of flags. Any defect in any of the flags manufactured here is a legally punitive offence, which is subject to a hefty fine or imprisonment.

Bengeri Village in Hubli or Hubballi is one of the must-visit weekend getaways from Bengaluru City. Bengeri is a 7-hour road trip from Bengaluru International Airport. While in Bangalore or on a trip to Hampi, do visit Bengeri and take a walk through the making of Tricolor at India’s only official National Flag manufacturing firm.