The US President Donald Trump, along with the First Lady Melania Trump is all set to make his maiden visit to India this month. Yesterday, the White House Press Secretary made an official statement confirming President Trump’s 2-day visit to India (February 24-25), which is being dubbed as a stride towards strengthening the US-India strategic partnership and defence cooperation.

The schedule of President Trump’s state visit to India includes a public event in New Delhi, which will be organized along the lines of ‘Howdy Modi’ in Houston that Indian Americans had organized for PM Narendra Modi in 2019, and a sojourn in Ahmadabad. According to the White House’s statement, the President and the First Lady will travel to PM Narendra Modi’s home state of Gujarat that played a crucial role in Mahatma Gandhi’s life and witness his leadership in the Indian freedom movement. 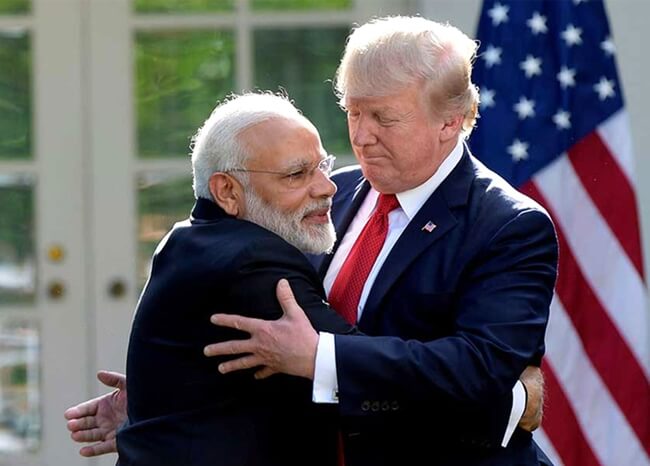 Notably, PM Modi had invited Trump to visit India, during his official trip to the US in 2017. While in India, President Trump and Melania Trump will ‘interact with a wide cross-section of Indian society.’ Neither Washington DC nor New Delhi did mention whether Trump’s first India trip includes a stopover at the Taj Mahal in Agra. Trump Tajmahal in Atlantic City, one of his properties, is named after the Mughal monument.

Both the leaders, Trump and Modi, will share the dais to inaugurate the world’s largest cricket stadium, Motera Stadium or Sardar Patel museum in Ahmedabad, on February 25. In 2016, the stadium was completely demolished and has been reconstructed to the bare bones, at the cost of $100,000,000. Post reconstruction, Motera Stadium is spacious enough to accommodate 110,000 spectators, which surpasses the capacity of Melbourne Cricket Ground in Australia.

In addition to the inauguration of Motera Stadium and the ‘Kem Cho, Trump!’ rally in Ahmedabad, President Trump’s visit to India will culminate in the most awaited inking of a $2.6 billion deal for India’s purchase of naval military Seahawk helicopters from a US defence firm, according to Mukesh Aghi, the president of the US-India Strategic and Partnership forum. The White House has already accepted India’s proposal to buy an integrated Air Defence Weapon System from the United States for about USD 1.87 billion. India’s spend on defence and military purchases from the USA has totaled up to 417 billion since 2007.

Subscribe to Travel Beats, a leading overseas Indian community portal, for latest Indian Diaspora stories, US visa & immigration news, and air travel to India updates. Travel Beats is a subsidiary of Indian Eagle, a trusted travel-booking partner of NRIs, OCIs and PIOs, with a proven record in booking flights to India for guaranteed low fares.