The Indian Independence Day celebrations in the Northeast USA coincided with the grand inauguration of the new BAPS Sri Swaminarayan Temple in New Jersey this month. While the New York India Day Parade 2019 at Madison Avenue was a manifestation of patriotic fervor among Indians, the spectacular inauguration of New Jersey’s BAPS Sri Swaminarayan Mandir in Edison was attended thousands of devotees brimming with devotion.

The new BAPS Sri Swaminarayan Mandir in Edison, NJ is a foundation of devotion, spirituality, dedication and integrity. “The inauguration of the temple is a dream come true for scores of devotees from across New Jersey and beyond,” said Himanshu Patel, one of the lead volunteers. 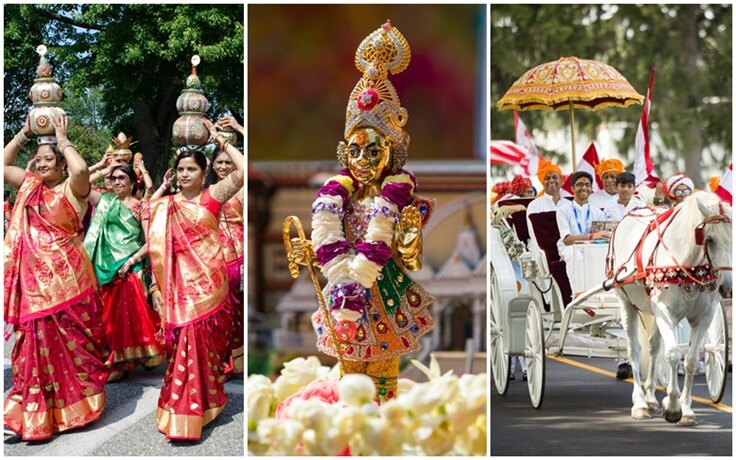 With over 100,000 hours of volunteering and three years of hard work, Edison became home to the new BAPS Sri Swaminarayan Mandir. Following a 9-day celebration full of spiritual ecstasy and divine joy, the temple opened its doors to one and all on August 18. The inauguration ceremony commenced on August 10 and culminated on August 18.

In fact, BAPS Sri Swaminarayan Mandir in Edison was inaugurated by Pramukh Swami Maharaj in 1991. With the explosion of Indian populace in and around New Jersey, the inflow of devotees to the temple increased manifold and the temple premises fell short of space for the crowd on festive occasions. Hence, a big temple building was planned.

The new building of BAPS Sri Swaminarayan Temple, Edison with three floors and a mezzanine floor measures 150,000 sq. ft. in total. Cost-efficient technological advancements were deployed for the eco-friendly construction. The new building features natural lighting techniques to cut down its carbon footprint. The new building houses a world-class gymnasium, youth classrooms and an assembly hall for spiritual practices as well as community activities.

The inauguration ceremony began with the Vishwa Shanti Maha Yagna, which is an age-old Vedic practice invoking world peace. With several Indian families having participated in the yagna, the ritual continued for two days – August 10 and 11. The culmination of the temple-opening festivity was murti pratishtha, on the morning of August 17 and 18. The idols were consecrated to the presiding deities of Baps Sri Swaminarayan Mandir, with close adherence to Hindu customs and Vedic rituals. 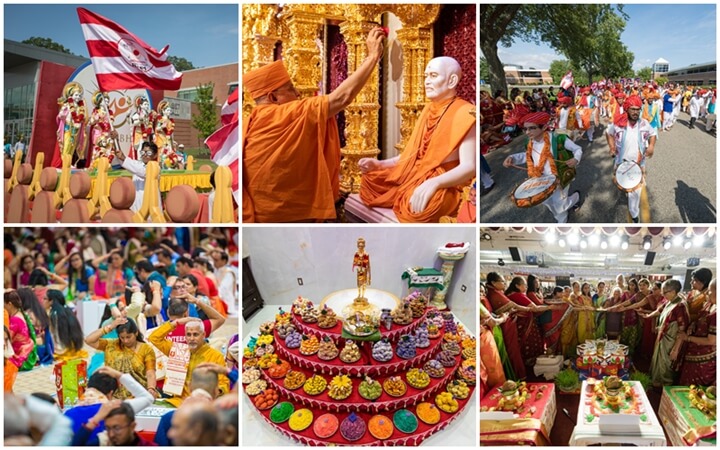 Nagar Yatra was the most spectacular attraction of the inauguration of BAPS Sri Swaminarayan Mandir in Edison, New Jersey. After the consecration ceremony, the sacred idols of Bhagwan Swaminarayan and Hindu deities were paraded, on the beautifully embellished floats, through the streets of Edison. Devotees of various age groups, dressed in traditional Indian clothes, joined the procession.

7 am and 6:30 pm are the timings of daily aarti at the new BAPS Sri Swaminarayan Temple, Edison.

Today, BAPS Swaminarayan Sanstha serves the global Hindu community through hundreds of humanitarian activities in such different fields as education, culture, health, environment and disaster relief. As many as 55,000 volunteers worldwide have made it possible through their unflinching dedication towards the noble missions that BAPS is committed to accomplish.

Notably, BAPS volunteers actively participated in the relief work across Houston in the aftermath of Hurricane Harvey.