The high-octane foreign policy for the ruling NDA government of India requires Prime Minister Narendra Modi to make several international trips for global leadership summits and diplomatic missions in the first six months following the beginning of his second term. Evidently, PM Modi’s 2019 foreign visit schedule, which kicked off with his trip to the Maldives in June, was a talk of the town for various reasons. 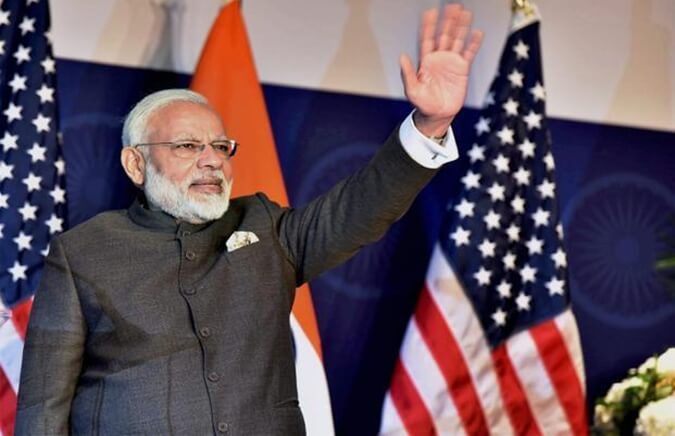 The most watched out on Modi’s 2019 schedule of foreign trips is his upcoming visit to the United States for the UN General Assembly meeting in New York. During his visit to USA in September 2019, PM Modi will address a Climate Change summit at the UN on September 23, initiated by UN Secretary General, in response to having been approached to lead the Industry Transition Track and represent India. Among his prime ministerial trips, this will be PM Modi’s third visit to the UN General Assembly in New York.

If the grapevine is to be believed, Chicago and Houston had a toss over who would host Indian Prime Minister Modi on his upcoming visit to the US. It is said that Chicago lost the toss to Houston, as it played host to India’s Vice President Venkaiah Naidu at the World Hindu Congress in 2018.

What’s the most interesting about PM Modi’s visit to Houston in September 2019 is the ‘Howdy Modi’ event this Sunday (September 22), for which more than 50,000 Indian Americans have already registered. Both PM Narendra Modi and President Donald Trump will address the rally at the ‘Howdy Modi’ in Houston. The White House has confirmed Trump’s attendance at the Houston event and described it as a step towards deepening the US-India relationship in defence, trade and energy. The NRG Stadium in Houston, Texas is the Howdy Modi event venue.

Titled the Howdy Modi, the Indian American community summit, to be held in honor of Narendra Modi, will see attendees from 48 US states, sharing cultural values and noble aspirations of two great democracies. Eminent business honchos, minority community leaders, US lawmakers and senior Democrats will be in attendance.

With over 50,000 attendees, the ‘Howdy Modi’ event in Houston will be thrice the size of each of the events held in New York, San Jose and Washington DC during Modi’s previous visits to the United States. The previous events held in honor of PM Modi were attended by a little more than 20,000 people. Notably, PM Modi is always eager to meet overseas Indians and connect them back to their roots.

According to the US Census 2010, Texas is home to the fourth largest Indian-origin populace. As of 2011-2015, the metro areas – Houston-The Woodlands-Sugar Land and Dallas Fort Worth-Arlington – have 84,000 and 74,000 Indian immigrants. But, a Pew Research Centre survey estimated that Houston alone had 125,000 people of Indian-origin in 2015.

Reportedly, Modi’s presence will take center stage at the climate meeting given the significance of India’s representation in the UNGA 2019. Earlier, he was honored with the UN Champions of the Earth Award for Policy Leadership.