Diwali 2016 is going to be a bigger celebration than ever for Indian Americans. Why not! Their 15-year effort to get Diwali festival recognized with a postal stamp in USA is finally rewarded. Yesterday, the US Postal Service Department announced the official release of a Diwali stamp recognizing the Festival of Lights in honor of the Indian American Community. A historic achievement of the Indians in USA!

The Forever USA Diwali stamp will be ceremoniously released on October 5 at the Indian Embassy in New York City. Evidently, it is the most exciting of all upcoming events in New York. It’s the time for not just celebration but also a walk down the memory lane to commemorate the hard work by the Indian American community leaders.

Carolyn Maloney, a member of the Democratic Party from New York’s 12th Congressional District, is an eminent leader of the nationwide movement by Indian Americans for having an official Diwali stamp in USA. She has already held an event celebrating the achievement and lauding the Indian community’s collective vision of a Diwali postal stamp in America. 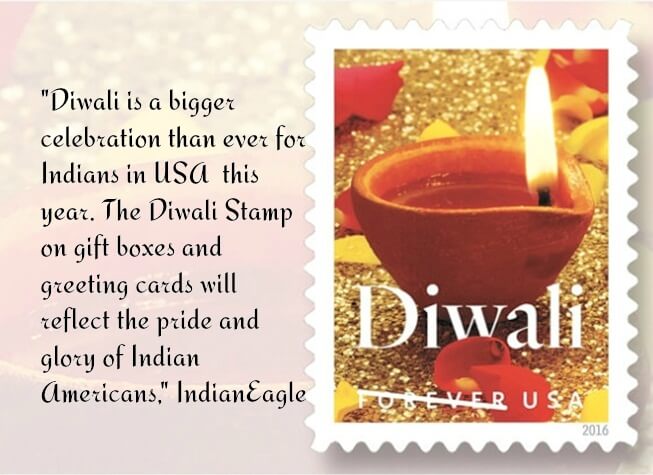 In her celebratory speech to the Indians in New York, Carolyn Maloney wholeheartedly thanked Ravi Batra and Ranju Batra, two Indian community leaders in New York City, for their contribution towards accomplishment of the mission. Ranju Batra is the chairperson of the Diwali Stamp project and Ravi Batra is an eminent attorney in New York. They left no stone unturned to collect more than 400,000 online signatures in support of the petition to issue a Diwali stamp in USA.

Riva Ganguly Das, India’s Consul General in New York City, joined Carolyn Maloney in saying, “The Forever USA Diwali Stamp is the glorious culmination of a long-term movement and a highly potential revenue generator for the US Postal Service Department.”

It was Carolyn Maloney who had introduced the resolution in the US House of Representatives to urge the postal service department for release of a Diwali stamp in America. Again it was she who requested Prime Minister Narendra Modi to talk about the movement for a Diwali stamp with President Barack Obama during his visits to the US in 2014 and 2015.

The credit for initiating the movement in 2001 goes to Dr. Shailendra Kumar, a Maryland-based Indian American physician. In 2007, the US Congress officially recognized the significance of Diwali for Indians in USA. In 2009, President Obama lit an earthen lamp (diya) at the White House, highlighting the religious and spiritual value of Diwali festival for Indian Diaspora.

The issuance of a Diwali postal stamp in USA is more than a reason to rejoice for many renowned Indian Americans like Ami Bera (Amerish Babulal), the US Representative for California’s 7th Congressional District. He stated euphorically, “Nearly one billion people, including more than 2 million Indians in USA, celebrate Diwali. The Diwali stamp not only recognizes the Festival of Lights but also represents the culture that they belong to. Being the only Indian American serving in the US Congress, I am ecstatic at this landmark achievement of our community.”

Indiaspora, a supporting body for Indian Americans, deserves a mention for taking the movement forward in 2015. In 2014, the Indiaspora leaders and volunteers united to make the Diwali postal stamp a reality. They walked the halls of Congress, held meetings with the Congressional officials, launched digital campaigns, gathered massive support and encouraged young Indian Americans to write to their elected officials.

Founded by M.R. Rangaswami, Indiaspora got a community letter signed by over 100 organizations in USA and sent it to the Citizens’ Stamp Advisory Committee. Thus the US Postal Service Department received over 10,000 letters and postcards requesting release of a Diwali stamp in USA.

The most recent signature campaign to gather momentum in actualizing the release of a Diwali stamp in USA was launched by Tulsi Gabbard, an eminent Hindu American politician and member of the Democratic Party.

The Diwali stamp on gift boxes and greeting cards in USA will reflect the glory and pride of Indian Americans this year and the coming years.

Travel Beats is an Indian American community portal by IndianEagle, a leading travel organization for Indians in USA. Travel Beats publishes latest news and interesting stories from the United States and India.