Indian Americans have gradually been redefining the desi perception of charity, which is donating to temples or religious entities and giving alms to beggars. However, the available reports on overseas Indians’ charitable giving do not speak highly of Indian Americans’ giving habits. One of the highest-earning ethnic groups in the United States, the Indian American community donates about USD 1 billion a year, whereas they have the potential of giving back $3 billion a year.

The survey released at the Indiaspora Philanthropy Summit at Georgetown University in 2018 concludes that Indian Americans donate a max 1.5% of their annual income, which is almost one-third of the average American donation. Indian Americans prolifically volunteer their time for diverse causes, which is almost double the US national average of volunteering hours; but they are not among the leaders in charitable giving, according to the survey.

However, brushing aside the debate on Indian Americans’ giving potential is their promising emergence into philanthropy in education and healthcare. In a recent instance of the increasing awareness about the social impact they could do with their more generous giving habits, an Indian American family has donated a whopping $5 million to fund research and education on heart health. 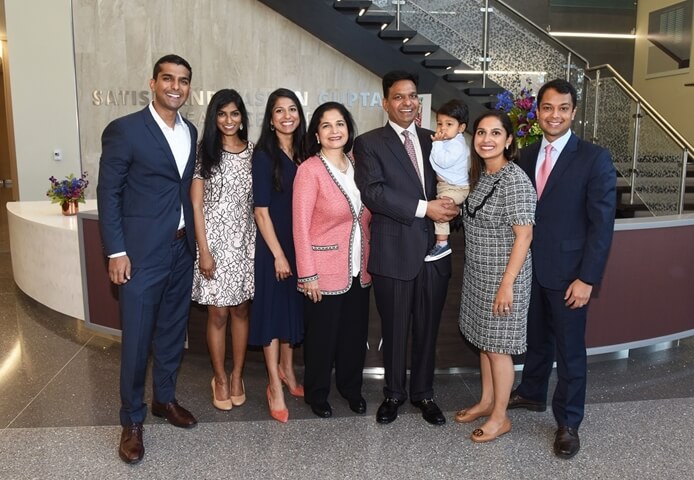 Dallas-based Yasmin and Satish Gupta, the founders of the Gupta Agarwal Charitable Foundation, are driven by their sheer commitments to improving access to knowledge and education for the welfare of communities, both local and global, through continuous research on heart health and others.

The impact of the Gupta Agarwal Charitable Foundation’s donation to Baylor Scott & White Health is not limited to Texas or the US at large; it is rather extended to physicians from all over the world. The fund will facilitate access to the world-class care provided at Baylor Scott & White Health’s Heart Hospital in Plano for physicians from other countries. They will also be allowed to get trained in the latest medical developments and take the knowledge home to better healthcare facilities in their countries.

The founder of SB International, steel baron Satish Gupta’s commitment to improving heart health care for millions of people is a very personal one. With a degree in Economics from Chennai, he came to the US in 1979 and studied MBA in International Trade & Management at the University of Dallas. In 1981, he set up his first steel export business. When he was grappling with challenges to cement the foundation of the business, his father needed a cardiac bypass surgery in India. Somehow he managed to bring his father to Texas for better cardiac treatment. In 2003, Satish Gupta himself noticed his cardiac symptoms and took a therapeutic approach to improve his heart health, consulting the best physicians at Baylor Scott & White Health in Dallas.

The Gupta family will helm the utilization of the $5-million donation. Satish Gupta’s daughter Samantha Gupta Parmar, a healthcare professional, will help the newly created committee to direct the gift to achieve the goals. Moreover, Satish and Yasmin Gupta will help further the mission with their business acumen and philanthropic commitment. “Anything you give should snowball to something bigger, and our gift to Baylor Scott & White Health is a global initiative to impact lives positively,” said Yasmin Gupta in a press release.

The Satish and Yasmin Gupta College of Business, a 45,000-sq-ft world-class academic building at the University of Dallas, was inaugurated in 2016, and it is a testimony to the Indian American Gupta family’s passion for community welfare.

This news story is brought to you by Indian Eagle Travel at its overseas Indian community portal, Travel Beats, as part of the continued effort to promote good work by Indians in USA. Indian Eagle not only strives to make flights to India from USA cheaper and better, but also caters inspiring community stories, visa & immigration news, and international travel alerts through free newsletters.